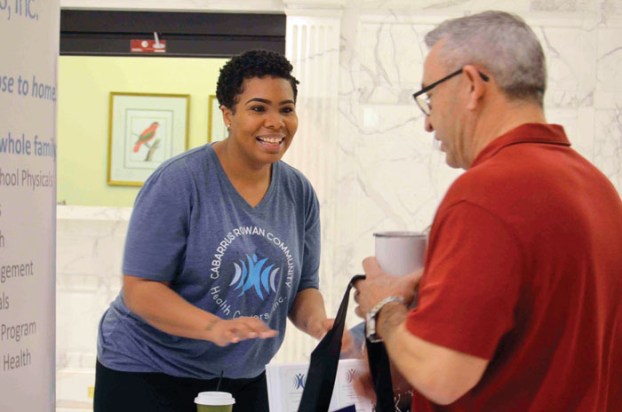 KANNAPOLIS — On Feb. 16, 2009, Bobbie Beam walked onto the N.C. Research Campus in Kannapolis where she signed up to be the first participant of a then newly formed MURDOCK Study.

The Measurement to Understand the Reclassification of Disease of Cabarrus/Kannapolis or simply, the MURDOCK Study, is Duke University’s first longitudinal medial research study based at the N.C. Research Campus.

Beam stopped by a drop-in on Saturday for she and the thousands of participants who signed up in 2009 for the study. She admits there was a lot concern from her friends and family at the time about the study, mostly because they were concerned of what researchers would do with her personal information.

Beam eventually would reassure her family and friends and continue to provide the study with follow-up information and observations about her health.

“I think it’s a wonderful thing,” she said of coming together after 10 years.

She believes the research campus and the studies conducted there is the best thing that’s happened to Kannapolis.

She said time has flown by and over the 10 years life has changed for her including being a caretaker for her daughter, but she keeps up with the MURDOCK Study and other sub-studies.

“He walked in after me,” Beam joked.

Tyson said he joined the study because he wanted to see it become a success for his home city.

“I have a great love for the community. My mom was a mill worker,” he said.

Tyson is grateful for the study and the research campus, he said because the area was at a danger point with the closing of Cannon Mill and other businesses leaving the area.

Antonio Nunes was also among the first wave of participants. In fact, his wife Perla, was the project leader.

“I believe in helping the community. This was a great way of helping out,” Nunes said.

He said he was skeptical and didn’t know at first whether people would continue to participate or if participation would dwindle. He’s glad to see it progress.

One of the reasons he joined the study was because of some of the health issues his family has experienced.

Nunes said he’s always felt comfortable with his decision to join the study.

Pearl Asbury said when she initially heard about the study she had a different idea of what it was about, but once she was educated she even helped recruit people from her church to enroll.

“I thought that if there was a study, maybe my children and grandchildren would benefit from it,” Asbury said.

Since taking part in 2009, Asbury has retired from being a CNA in home healthcare. She’ll turn 91 soon. She previously worked as a nursing assistant in a hospital setting before retiring the first time.

Jim Imorde participated in the study and continues to follow up each year. He said being a part of the study makes him feel as though he’s making a contribution for future generations.

Through the participation of more 12,500 people and a collection of nearly 450,000 biological samples, researchers have been able to study many health issues including prostate cancer, memory health, epilepsy and schizophrenia.

The MURDOCK Study was made possible with a $35 million gift from David Murdock to Duke University. The MURDOCK Study paved the way for the Duke Clinical & Translational Science Institute and all of Duke’s work such as the Project Baseline study.

Dr. Kristin Newby is the lead scientist for the MURDOCK Study, which is managed by Duke Clinicial & Translational Science Institute. She is also co-director for the Duke Cardiac Care Unit, and Professor of Medicine in Cardiology at the Duke University School of Medicine.

“Anytime you start a project of this scale there’s always concerns of how it’s going to turn out,” Newby said.

She said seeing people at the anniversary celebration shows they are investing in the community.

“We are a community and that’s the most satisfying,” she said.

“It’s really about them,” Newby said.