J.B. Holmes rallies to win a marathon finish at Riviera 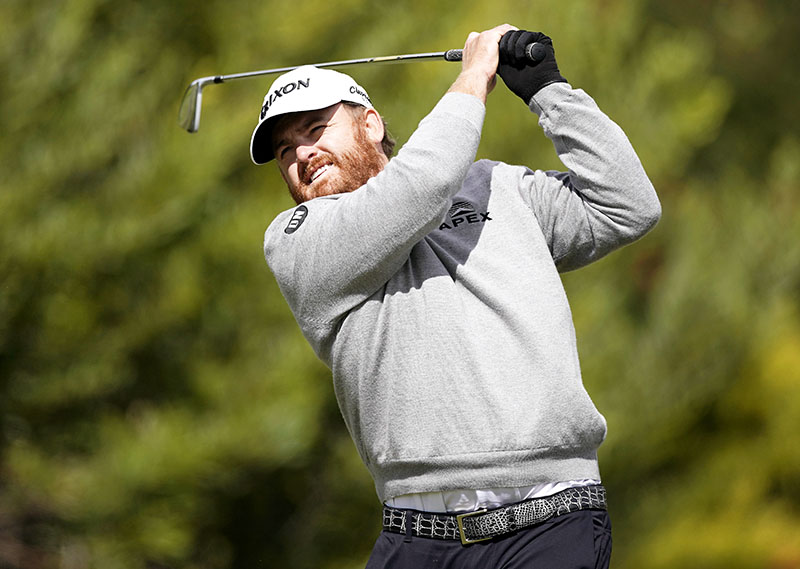 J.B. Holmes hits his tee shot on the fourth hole during the final round of the Genesis Open golf tournament at Riviera Country Club on Sunday, Feb. 17, 2019, in the Pacific Palisades area of Los Angeles. (AP Photo/Ryan Kang)

LOS ANGELES (AP) — J.B. Holmes rallied from a four-shot deficit in the final round and won a marathon finish Sunday in the Genesis Open for his first victory in three years and a trip back to the Masters.
Holmes closed with a 1-under 70, and that was enough to overcome Justin Thomas, who took 19 putts on the back nine at Riviera — three of them from 8 feet when he lost the lead for good — and shot 75.
“I knew it was going to be very difficult to shoot a low score,” Holmes said. “I needed some help from Justin.”
They played 34 holes because of a seven-hour rain delay at the start of the tournament Thursday, and that wasn’t even the worst of it. The final day featured a wild shift in weather, from sunshine in the morning to complete 16 holes of the third round, brief rain when they teed off in the final round and wicked wind that made it tough to hole putts.
There were three two-shot swings on the back nine, all because of putting.
The biggest moment was on the 13th hole, when Holmes was one shot behind and made a 12-footer for par. Thomas, who had lagged his birdie putt from 65 feet to 8 feet from the cup, three-putted from there for a double bogey to fall one shot behind.
He three-putted the next hole to fall back further, made an 8-foot birdie on the 16th to get with one but couldn’t catch up.
Holmes had his problems, too. Right when he took the lead for the first time — a birdie on the par-4 10th and a three-putt bogey from long range by Thomas — Holmes turned birdie into a shocking bogey when he three-putted from 3 feet.
Thomas, who looked sharp as ever in the morning in his round of 65 to build a big lead, missed a 6-foot birdie putt that would have tied for the lead at the par-5 17th after Holmes three-putted for par from 30 feet. He had one last chance to force a playoff, but his 20-foot birdie putt broke off to the right.
“I struggled putting in the wind out there,” Thomas said. “Unfortunately, it showed a flaw in my game. It was obviously very difficult. J.B. won. He played great. It’s always a bummer to hand a tournament. I feel like I should have won that thing.”
Tiger Woods shot 65 to finish his morning third round, though he was never in range of winning. Woods closed with a 72 in the afternoon, and tied for 15th.
“I got tired,” Woods said. “I don’t know if I’m the only one, but I definitely felt it today. Wind, cold. I was at 10 (under) and I slipped four shots coming in. That’s the way it goes.”
He said he wouldn’t touch his clubs on Monday as he goes from cold air at sea level to Mexico City next week.
Holmes and Thomas weren’t the only ones who struggled on greens that became increasingly bumpy from so much golf, and wind. Adam Scott was right in the hunt until he missed six consecutive putts from under 10 feet that dropped him out of contention quickly.
Holmes finished at 14-under 270 for his first PGA Tour victory since the 2015 Houston Open, where he rallied from six shots behind.
Si Woo Kim had a 66, the low score of the final round, and finished third. Rory McIlroy almost got back in the game when he holed a bunker shot on the 16th to get within two shots, but he failed to birdie the par-5 17th and was fooled by the wind in making bogey on the final hole for a 69. He tied for fourth with Marc Leishman (68).
No one had a tougher time than Jordan Spieth, whose final round included a birdie, par, bogey, double bogey, triple bogey and quadruple bogey, the latter on the 10th hole when he hit four shots out of bunkers. He shot 81, his second-highest score as a pro.