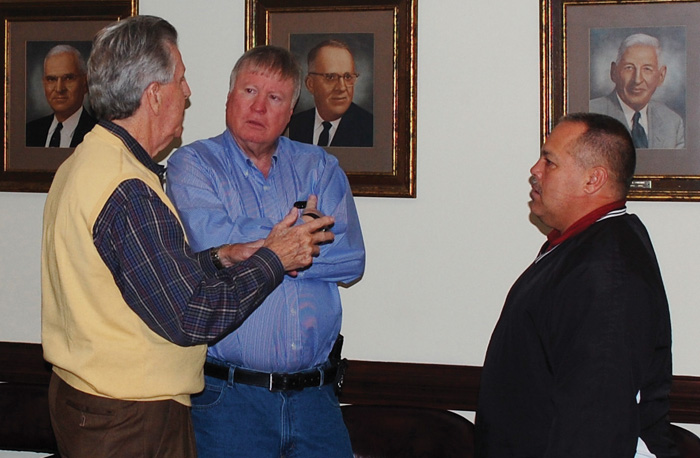 Earlier this month, Town Manager Reed Linn and Finance Officer Ginger Gibson resigned. They are the subjects in an SBI inquiry into allegations of embezzlement. Police Chief Kenny Isenhour was appointed interim town manager on Tuesday.

Isenhour said his goal is transparency and efficiency during the investigation, adding there is a reason the police chief and assistant police chief are now leading the town’s management.

As the town “fills in holes,” one area of concern may be an insufficient unassigned fund balance — which is similar to a savings account the town could use for any purpose. It’s something about which the Local Government Commission — a financial regulatory agency — has issued warnings to Landis before. Now the town’s fund balance appears to have dipped below 1 percent of total general fund expenditures — well below the state-recommended minimum of 8 percent — according to a draft 2017-2018 audit posted under the town’s transparency section on its website.

The Local Government Commission looks at municipalities to determine if the amount in a fund balance is adequate and will send a letter if the balance is under 8 percent.

“An available fund balance is essential to ensure adequate resources are available to meet cash-flow needs and to address unforeseen circumstances,” said Greg Gaskins, secretary of the commission.

In a 2011 letter, for example, Sharon G. Edmundson, director of the State Treasurer’s Fiscal Management Section, wrote a letter to then-Mayor Dennis Brown that said, “In the General Fund, the percentage of fund balance available for appropriation relative to expenditures continues to be inadequate to support current operations.”

Asked about the 0.8 percent unassigned fund balance in the 2017-2018 audit, Mahaley, despite the fact that the Landis Board of Aldermen must approve a budget every year, said it’s not something for which he’s responsible.

Isenhour said he is working with the SBI and the auditor to provide information for the embezzlement allegations while working with the Local Government Commission to get the town back on track.

Isenhour said he and Hosey will “stay there long enough to help the town back on its feet” as interim town manager and finance officer.

Public Works Director Ron Miller also has stepped up to fill the role of fire chief. Linn simultaneously served as fire chief and town manager, but resigned from both last week.