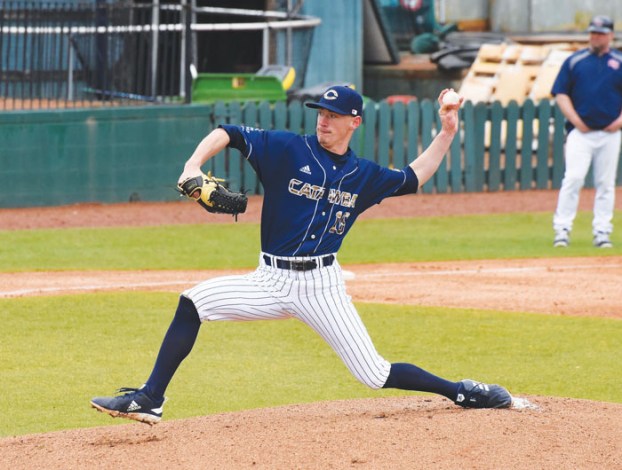 SALISBURY — Lefty Bryan Ketchie turned in an old-school performance on the mound for Catawba’s baseball team (11-1) at Newman Park on Saturday.

Ketchie, who starred for West Rowan High and the Rowan County American Legion team, threw 106 pitches, including 79 strikes in a 7-1 win against Shippensburg.

Ike Freeman (East Rowan) went 2-for-4 in UNC’s 8-3 win against Xavier on Saturday.

MOUNT OLIVE —  Mount Olive pulled away in the second half to record a 17-8 victory over Catawba in women’s lacrosse action on Saturday afternoon at the McDonald Complex.

Catawba will host North Greenville on Wednesday at 7 p.m.

North Rowan’s boys will be the top seed for the boys side of the tournament.

In the North Piedmont Conference, both first-round girls games will be played at Statesville on Monday.

Fourth-seeded West Rowan plays fifth-seeded East Rowan in the 6 p.m. game, with the Statesville vs. South Iredell game at 7:30 p.m.

The boys teams for East Rowan and North Iredell won’t be competing in the NPC tournament after fighting marred Friday’s game in Olin.

Statesville is the host for the semifinals and finals.

Central Cabarrus’ girls are the top seed for the tournament.

Cox Mill is the host for the tournament semifinals and championship games.

Davie County’s boys will have a first-round bye in the Central Piedmont Conference tourney.

Davie’s girls will be seeded sixth and will open the tournament against No. 3 East Forsyth

By David Shaw sports@salisburypost.com ALBEMARLE — The guest of honor barely uttered a word, but no one complained. Joe Ferebee could... read more