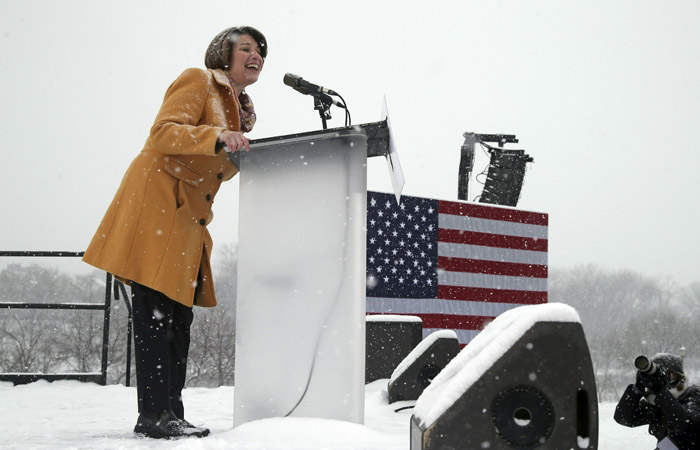 Democratic Sen. Amy Klobuchar addresses a snowy rally where she announced she is entering the race for president on Feb. 10 at Boom Island Park in Minneapolis. Jim Mone/Associated Press

It snowed on Amy Klobuchar as she announced her run for president. And while that might be a bad omen for some candidates, the icy weather accurately symbolizes her appeal.

The Minnesota Democrat, just elected to a third Senate term, portrays herself as a common-sense pragmatist from a blue-collar family who often invokes her grandfather, an iron miner descended from Slovenian immigrants. That makes her, goes the storyline, a proud Midwesterner who is used to working hard and overcoming obstacles. Only the coddled coastal elites would complain about a little snow.

“She’s just a Midwest voice. She’s no-nonsense,” Mary McAdams, an Iowa Democratic official, told The Wall Street Journal. “It’s common sense, and we like that about her.”

It’s far too early to say that Klobuchar will win the Democratic nomination or even come close. But Democrats who make defeating Donald Trump their top priority, as opposed to vowing allegiance to the canons of liberal orthodoxy, should be taking her seriously.

The elections of 2018 were badly misread by left-wing activists. They cite the victories of two highly publicized House members, Alexandria Ocasio-Cortez of New York and Ayanna Pressley of Boston, as a sign that the party and the country are headed in a liberal direction.

That’s simply wrong. The two women captured safe urban districts in deep-blue states. The Democratic majority in the House was built by dozens of more moderate candidates winning suburban districts in purple states like Virginia, Pennsylvania and Iowa, candidates who look and sound much more like Klobuchar than Bernie Sanders or Elizabeth Warren.

Last fall, only 27 percent of voters called themselves liberals, while 37 percent identified as moderates and 36 percent as conservatives. The liberal quotient falls well below Trump’s base of about 37 percent, a stark reminder that this remains a center-right country. When Democrats ignore that reality, they court defeat.

In the past 50 years, the party has nominated plenty of liberals for president — Hubert Humphrey and George McGovern, Walter Mondale and Michael Dukakis. They all lost. Badly.

Of the six Democrats who have been elected president since the death of Franklin Roosevelt in 1945 — Harry Truman, John F. Kennedy, Lyndon Johnson, Jimmy Carter, Bill Clinton and Barack Obama — not one came from the Sanders-Warren wing of the party.

Klobuchar doesn’t either, which is partly why she is receiving so much attention. Washington Post columnist Henry Olsen calls her Trump’s “worst nightmare.” Data analyst David Byler noted in the Post that “on paper,” Klobuchar “is a great candidate for the modern Democratic Party.” Nate Silver predicted on his website Five-Thirty-Eight that the Minnesotan “has a considerably better chance of winning the nomination than you might guess.”

The reasons begin with her progressive-yet-reasonable reputation as someone who gets things done. A 2016 survey found that she had passed more laws than any other senator. Moreover, Democrats desperately want a winner — not a martyr. Fifty-six percent in a Monmouth University survey said they favor a candidate who could beat Trump “even if they disagree with that candidate on most issues.” Only 33 percent said they prefer purity to electability.

Klobuchar is a proven vote-getter, outpolling Hillary Clinton’s 2016 total in Minnesota by more than 20 points last fall. And she comes from a critical geographical area. Democrats don’t need a candidate from California or New York to secure those electoral votes. They need someone who can win back states like Michigan and Wisconsin, which helped give Trump his narrow victory.

Then there is gender. Sure, Clinton suffered some sexist blowback, but she did not lose mainly because she was a woman; she lost because she was a poor candidate. Good female candidates swept to victory across the country last fall, and a woman running against Trump would be an asset, not a drawback. Democrats can win by maximizing their share of the female vote, and a woman at the top of the ticket can only help that effort.

Klobuchar is hardly the perfect candidate. Recent stories have focused on her reputation as a mean-spirited boss. She lacks the vast grass-roots funding network other candidates have built, and she has yet to prove she can attract nonwhite voters who make up 40 percent of the Democratic primary electorate. Above all, can she inspire loyalty? Can “Minnesota nice” turn into fire and ferocity?

But this much is clear: Snow can’t stop her. She knows how to use a shovel. Her grandfather was a miner, after all.