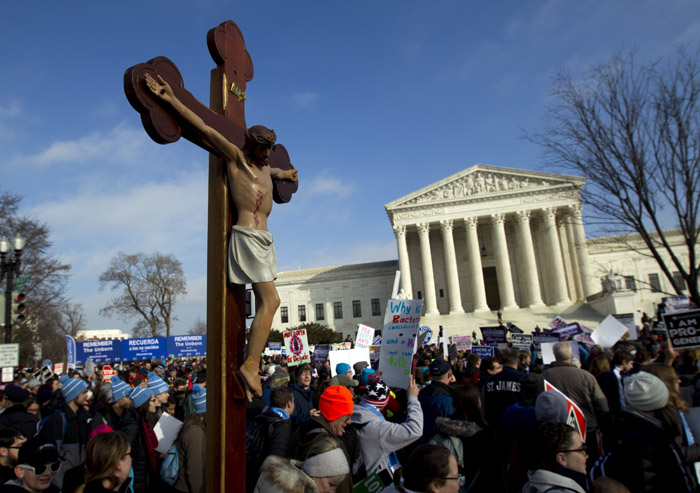 Anti-abortion activists march outside the U.S. Supreme Court building on Jan. 18 during the March for Life in Washington. Jose Luis Magana/Associated Press

But that relief is likely to be short-lived. Waiting in the pipeline are at least 20 lawsuits, in various stages of judicial review, that have the potential to be decided in ways that could significantly change the rights laid out in the 1973 Roe v. Wade ruling and then refined almost two decades later in Planned Parenthood v. Casey. That 1992 decision said a state may place restrictions on abortion as long as it does not create an “undue burden” on a woman’s right to the procedure.

Most of the new cases involve challenges to state laws restricting access to abortion.

In Indiana, for example, abortion rights proponents have sued to block a measure signed into law by then-Gov. Mike Pence that would require women to get an ultrasound and wait 18 hours before getting the procedure and bar abortions based on sex or a prenatal diagnosis of fetal anomaly.

In Alabama, the focus is on a law that would ban a common form of second-trimester abortion.

There’s also a case awaiting a decision from the District of Columbia Circuit Court involving a challenge to a Department of Health and Human Services policy that prevents undocumented minors in federal custody from having abortions.

Abortion rights supporters and foes alike describe today as the most perilous time for Roe v. Wade since the early 1990s when the nation’s top court was filled with Republican appointees selected by Presidents Ronald Reagan and George H.W. Bush, and blockades, bombings and arson at clinics were ramping up.

In 1991′s “Summer of Mercy” in Wichita, Kansas, thousands of antiabortion protesters gathered in the hometown of George Tiller, a physician who performed abortions late in pregnancy. Tiller was killed at his church 18 years later, in 2009, by an antiabortion extremist.

The parallels between that time and today are not lost on historians.

“That was a moment people thought Roe v. Wade was going to end, and abortion rights were going to disappear,” said David S. Cohen, a law professor at Drexel University, whose research explores issues such as abortion at the intersection of constitutional law and gender. “Many people feel that way now.”

Clarke Forsythe, senior counsel at Americans United for Life who has written a book about the deliberations behind Roe v. Wade, said that “in 1992 and today, I think almost everybody expects the court to overturn the decision.”

The Supreme Court “has made a mess of abortion law. And it’s a mess only the court can fix,” he said.

The emotion surrounding abortion has been especially intense in recent weeks amid legislative efforts in Virginia and New York to loosen restrictions for abortions later in pregnancy. With concerns that Roe v. Wade’s fall is imminent, many states are moving to either codify the right to abortion or else teeing up restrictive laws that will lead to challenges that they hope will eventually make their way to the high court to hasten its demise.

President Donald Trump has weighed in several times with his own, often misleading characterizations of the debate. During his State of the Union address, he asserted that “lawmakers in New York cheered with delight upon the passage of legislation that would allow a baby to be ripped from the mother’s womb moments from birth.”

New York’s law actually allows for abortions after 24 weeks if necessary for the life or health of the mother or if the fetus is not viable.

Then, at a campaign rally in Texas on Monday night, Trump accused Virginia Gov. Ralph Northam of stating “he would even allow a newborn baby to come out into the world and wrap the baby and make the baby comfortable, and then talk to the mother, and talk to the father, and then execute the baby.”

Northam, who was talking about babies with severe abnormalities or which were nonviable, actually said the baby would be delivered and resuscitated, if that’s what the parents wanted.

In 1992, many people were surprised when the Supreme Court reaffirmed abortion rights in the landmark Casey case, after Justices Anthony M. Kennedy, David Souter and Sandra O’Connor — all of whom were appointed by Republican presidents — defied expectations and supported women’s constitutional right to terminate their pregnancies.

Cohen said he does not expect surprises from the justices on the bench today. “It hard to see how (Roe v. Wade) survives with the current lineup,” he said. But, he added, it’s possible it may not be completely overturned but simply “whittled away.”

“It always has been the goal of the antiabortion movement to ban abortion outright, and that is really coming into acute focus now with a Supreme Court tipped in favor of the anti-choice agenda,” said Amanda Thayer, deputy national communications director for abortion rights group NARAL.

“The threat to Roe v. Wade and the fundamental freedoms enshrined in Roe is coming through the courts,” Thayer said.

Below are some of the key abortion cases working their way through the courts. Cohen said it’s possible several could be accepted by the high court in the coming year. “If any one of those gets to the Supreme Court, it could be the basis of overturning Roe,” he said.

This is the case the high court delayed taking effect in early February. It involves a 2014 law that requires physicians at abortion clinics to have admitting privileges at nearby hospitals and which is nearly identical to a Texas law the Supreme Court struck down in 2016. Opponents have argued the law unduly burdens a woman’s access to abortion — and it has been tied up in the courts ever since having never taken effect. After the high court blocked the rule from taking effect, Robert Barnes wrote in The Washington Post that “it seems likely the full court will now grant the case a full briefing and review.”

There are two key abortion cases pending in Indiana involving a measure signed into law three years ago. The first challenges a provision that would prohibit abortions based on race, sex or disability, as well as a mandate that fetal remains be buried or cremated. The second takes issue with an 18-hour waiting period between a required ultrasound and an abortion.

In the first lawsuit, the local Planned Parenthood affiliate argued that prohibiting abortion on such a basis is unconstitutional, and U.S. District Judge Tanya Walton Pratt granted a preliminary injunction shortly after the legislation became law.

In the second case, involving the 18-hour waiting period, Pratt struck down that part of the law. She said the state failed to prove an 18-hour waiting period for an abortion would have any impact on a woman’s decision to go ahead with the procedure, according to the Indianapolis Star. She also noted it would place an undue burden on some women, particularly lower-income women.

Indiana Attorney General Curtis Hill last year asked the Supreme Court to review the first case, and on Feb. 4, he appealed to the court to hear the ultrasound case.

The case involves a challenge to a Mississippi law that bans abortion after 15 weeks of pregnancy. A federal judge in November permanently blocked it, declaring it unconstitutional. According to Rewire News, “The decision reaffirms that viability is the constitutional standard to judge these types of abortion restrictions, and that at 15 weeks, a fetus is not viable and therefore the state cannot ban abortion care at that point. U.S. District Judge Carlton W. Reeves took lawmakers to task for the law in a strongly worded opinion that said the ban was obviously unconstitutional but that Mississippi lawmakers enacted it anyway.” The state of Mississippi has appealed.

Abortion rights groups have been fighting a ban on a common abortion procedure known as dilation and evacuation or D&E, typically used in second trimester pregnancies. In 2017, U.S. District Judge Lee Yeakel stopped the D&E ban from taking effect as it was an “undue burden” on women, according to the Austin Chronicle. Texas appealed, and the case was argued in November. A decision is pending.

Courts in Alabama, Arkansas and Kansas have also blocked similar laws from taking effect. On Thursday, according to the Cleveland.com, Planned Parenthood and other supporters of abortion rights sued to block a ban on dilation and evacuation in Ohio that was signed into law in December.