Kannapolis baseball franchise reaches out to fans with letter 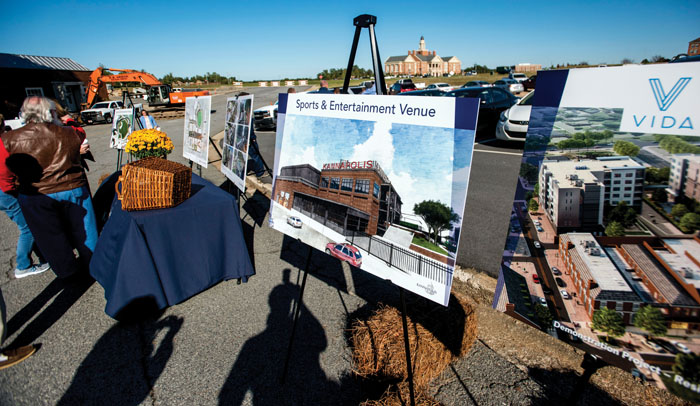 JON C. LAKEY / SALISBURY POST ... In a file photo from last Oct. 26, several artists renderings and sketches were displayed during a ceremony as The City of Kannapolis kicked off the new Downtown Revitalization Project.

Staff report
KANNAPOLIS — A day after the Kannapolis minor league baseball franchise concluded its week-long suggestion period for a new name, it addressed the fans in an open letter.On Feb. 6, the franchise launched its “Branded New By You” campaign, asking community members to suggest names to help define the team’s new identity. The “suggestion box” was closed on Feb. 13.

On Thursday, the team, operated by new owners Temerity Baseball, released a letter, describing some of the 1,233 rebranding suggestions.

An excerpt from the letter:

“In all, we received 1,223 submissions. Some made us cringe. Some made us laugh. Many made us stop and think. A handful taught us something new (looking at you, possum fans and those who leaned on obscure mill terminology like “Bobbin Threaders” and “Mule Fixers” for inspiration). Others made us scratch our heads (the “Sheepsquatches?”). They all made us appreciate what a special place Kannapolis is. Even the Earnhardts shared their thoughts, and Dale Jr.’s suggestions were consistent with the views of many of you.”

By Twitter, Earnhardt Jr. offered two suggestions on Feb. 7 — “If a change is indeed imminent maybe: ‘Ironheads’ if they want to continue to honor Big E,” Earnhardt Jr. tweeted, and added, “‘Cannons’ if they’d like to honor some history of the town itself.”

The team’s letter continued, revealing that a lot of race fans sent in suggestions:
“A large number of submissions were related to the area’s deep racing history. We’re eager to embrace this legacy at the new ballpark and feel very fortunate we’ll practically be co-located with Dale Earnhardt Plaza. Before launching the Branded New by You campaign, we had many discussions with community representatives about how best to incorporate Intimidator Pride into the new stadium and surrounding area while addressing the reality that we do not own and therefore cannot confidently build around the Intimidator name. This process reinforced that it is important to the community that we find ways to honor the ball club’s impressive history and its connection to Kannapolis’s favorite son, Dale Earnhardt. Stay tuned for more on these plans between now and Opening Day of the Sports and Entertainment Venue (SEV) in early 2020.
“That being said, racing isn’t the only pillar this town is built upon. We spent time in January with a handful of former Cannon Mills employees and came to appreciate how important the mill and its technological innovations were to the region and the world. Hundreds of you emphasized the importance of J.W. Cannon and the Cannon family to Kannapolis. The textile mill is how this area first made its mark on the world, and that’s something to be celebrated as well. As we go forward in this process, we will think seriously about ways to pay homage to this part of Kannapolis’s history, too.”
The team opens the season as the Intimidators on April 4, hosting the Rome Braves. Kannapolis is once again a Class A affiliate of the Chicago White Sox.
The letter concluded by explaining that “minor league baseball rules say we can’t debut our new team name until after this season ends.”
The regular season ends on Aug. 29 and the team’s new name and logo should be announced shortly after that.