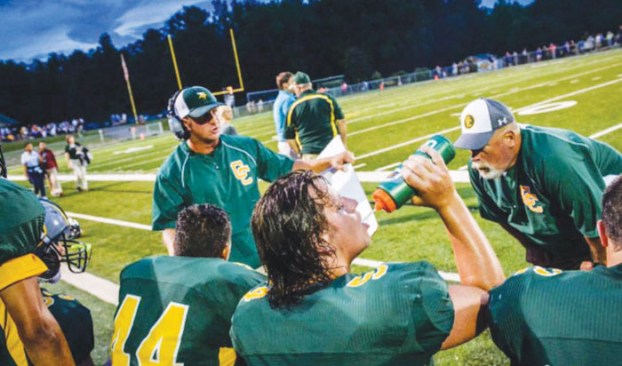 Facebook photo ... Daniel Crosby, left, coaches on the sideline of a Central Cabarrus High School football game in 2016. Crosby, an assistant at Mt. Pleasant, Central and then Cox Mill, was named head coach at Carson High School on Tuesday. 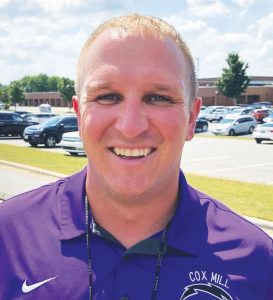 CONCORD —  Daniel Crosby is one of the lucky ones.

He’s known since he was a teenager at South Rowan High what he wanted to do with his life. He wanted to be a high school football coach.

Considered one of the up-and-coming assistant coaches in the area for several years, Crosby’s opportunity to lead a program and put his stamp on it arrived this week. He’ll take the reins at Jesse Carson High.

“I’m coming home in a lot of ways,” Crosby said. “I grew up in China Grove, and if Carson had been open when I was in high school, I would have been going to school there instead of South. My dad (Danny) lives two minutes from Carson.”

Crosby, 32,  is who he is today largely because of his dad. His father wrestled and played football and baseball at South Rowan in the early 1970s and later worked at South for decades. He was a behind-the-scenes part of many South wins in its 4A days,  as a baseball and football assistant as well as field maintenance expert. He served as South’s athletic director late in his teaching career.

“I always wanted to follow my dad,” Crosby said. “He loved teaching and coaching.”

Crosby’s first phone call after he was hired by Carson was to his father. One of the next ones was to Donnie Kiefer, the former Central Cabarrus coach who is now working in South Carolina.

“Coach Kiefer was the biggest influence on me as a football coach,” Crosby said. “As far as building a football team and building an overall athletic program, he taught me a lot.”

Crosby was a good athlete. As a South Rowan Raider, he was all-county in football and baseball.

In baseball, he was an aggressive catcher and third baseman, swinging a solid bat in the middle of the lineup and excelling defensively. In football, he was the prototypical hard-nosed linebacker/fullback. He struggled with injuries in both sports. A thumb injury cost him his junior baseball season in the spring of 2004, but in both sports, he was a vocal team leader — an athlete with future coach written all over him.

After graduating from South in 2005, Crosby headed for Averett University in Danville, Va., and was part of the football program there for two years.

He finished work on his college degree at Catawba in 2010.

The world of racing — he’s still a huge racing fan — tugged at him for a while, but it wasn’t long before he entered the coaching/teaching ranks.

He did his student teaching at Mount Pleasant High and head coach Michael Johns gave him an opportunity to be fully involved with the Tigers’ football program.

Crosby’s next stop was Northwest Cabarrus Middle School, where he coached football and basketball.

He moved on from there to Central Cabarrus High. He spent six seasons with the Vikings, five under Kiefer where he rose to the position of defensive coordinator, and the last one under Kenneth McClamrock, the former East Rowan coach who followed Kiefer at Central.

Crosby and his wife, Erin, live in Concord, just a few minutes away from Central, but he made a move to Cox Mill for this school year. Officially, he was the linebackers coach for the football team, although his duties were more extensive.

“I hit it off with the defensive coordinator at Cox Mill from the first day I was there, and we worked together closely,” Crosby said. “I was mostly responsible for our run defense, while he focused on our pass defense.”

Crosby had planned to coach track and field this spring for the Chargers, as well, but obviously his plans changed in the last week. He’ll be coming to Carson to begin teaching P.E. and weight lifting next month. The details on that switch are being hammered out now.

Crosby has enjoyed his brief stay at Cox Mill.  Among other things, he got to meet college basketball coaches Roy Williams (UNC) and Mike Krzyzewski (Duke) when they came to the school to visit basketball superstar Wendell Moore Jr.

But it will soon be time to trade purple for orange as his primary color.  He’s already started to think of himself as a Carson guy — as well as a Green Bay Packers guy and an Atlanta Braves guy.

“My wife and I are expecting our first child in March and I’ll also be starting work at Carson at the same time,” Crosby said. “That’s two huge life-changing events that I can really look forward to.”

Crosby was chosen as the successor to retired Joe Pinyan, one of the legends of Rowan County football.

Pinyan fielded great teams at Salisbury and had some good ones at Carson, although the Cougars struggled to 4-8, 3-8 and 3-8 since their most recent winning season in 2015. Assistant coach Josh Trexler guided the Cougars in their final two games last season after Pinyan stepped down.

Crosby said he’d had some “talks and discussions” with other schools in the past, but this was the first time he’d ever been through the full interview process for a high school head coaching job. He has impressed the right people, including Carson AD Becky Shopf and principal Angelo DelliSanti.

As far as his football philosophy, Crosby wasn’t interested in being labeled as a “running guy” or a “spread guy.”

“We want to be multiple and I’m sure you’ll see us do some different things in the power game and the passing game,” Crosby said. “I don’t have a defensive scheme or an offensive system that’s set in stone. I think you adapt to the kids that you have in your program and you do what gives them the best chance to be successful. High school athletics is about the kids, not the coaches. And this is about a lot more than wins and losses. Coaching is about believing in kids and helping them grow and be successful in life.”

Crosby said Carson football “has great potential,” but he hopes to impact the Cougars beyond the football field.

“There are football-related things that our guys can work on all year and need to work on all year, but as a weight-lifting teacher my goal is going to be to help Carson’s whole athletic program,” Crosby said. “We want guys to play three sports. We want our football players running track and we want them playing baseball and basketball. We want them to be well-rounded students and athletes.”