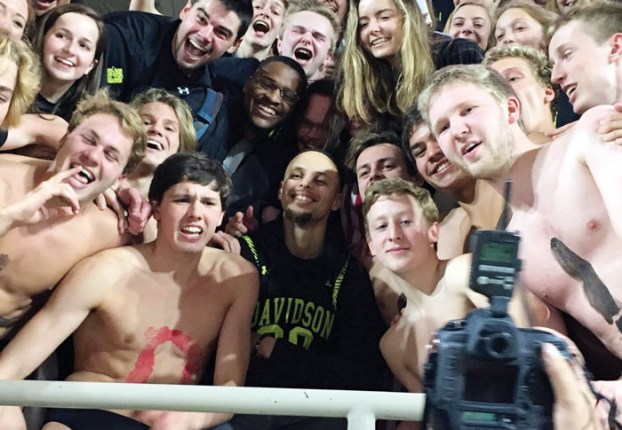 Golden State Warriors' Stephen Curry, center, poses with the Davidson College swim team as he takes in an NCAA college basketball game at his alma mater Friday, Feb. 15, 2019, while back in his hometown of Charlotte, N.C., for the NBA basketball All-Star game. (AP Photo/Steve Reed)

By STEVE REED, AP Sports Writer
CHARLOTTE (AP) — The Curry family All-Star Weekend is off to a rousing start — a Curry knocked down a big shot on Friday.
Not surprising, except it was Sonya Curry. Yes, Dell’s wife and the mother of Stephen and Seth showed she also hit a dramatic game-winning shot from deep.
Sonya sank a one-handed, half-court shot — that she took underhanded — to beat the clock and help her three-person team topple squads led by her NBA sons and one led by her daughter in a family shootout during a dedication of a refurbished Charlotte community center.
And she let her sons know about it. Sonya raced around the court after the ball went through the basket as fans in the crowded center cheered. She danced, taunting her sons as they looked on in amazement while her teammate and husband applauded.
“I was trash talking with the kids and I said, ‘me and your pops, we are going to take this thing from you.’ And they were like, ‘whatever, whatever,” Sonya said.
She joked that she now has “bragging rights” as the family’s best shooter, holding up a black-and-gold championship belt with the letters “SC” on it.
“I got the belt ,” Sonya proudly proclaimed.
Dell said Sonya practiced the shot last week and “she told me she was going to make it — she called it. I was shocked, surprised, amazed.”
So was Stephen, the Golden State Warriors two-time league MVP who said, “Unbelievable — absolutely unbelievable.”
Seth couldn’t hold back laughter knowing he just got beat by his mom, a former volleyball player — and knowing he’s probably not going to hear the end of it.
The Portland guard said afterward “that was a lucky shot, but she knocked it down on the big stage.”
He said he was just happy he didn’t lose to his brother.
The shootout featured that included the Curry children and their families. Each team had to make a layup, a foul shot, two 3-pointers from the corner and the top of the key and, finally a half-court shot in the timed event.
It was part of a busy day of All-Star Weekend activities for the Currys in their hometown of Charlotte, North Carolina.
After the community center dedication, Stephen headed 30 miles north to Davidson College, where he cheered on his alma mater against St. Joseph’s. It wasn’t just polite claps or nods after good plays, he really got into it.
At one point he tipped over a beer under his seat. He gave an incredulous look and pumped his fist when 6-foot-10 freshman center Luka Brajkovic threw a no-look over-the shoulder pass to teammate KiShawn Pritchett for an easy layup. And he clapped to “Cotton-Eyed Joe” at the halftime show featuring kids performing a Wizard of Oz dance routine.
And after Davidson won Stephen jumped into the student section and posed for a picture with the Davidson men’s swim team — who were wearing nothing but Speedos.
The crowd roared with delight, chanting, “MVP, MVP, MVP.”
While Stephen was taking in the Davidson game, Seth was heading downtown to meet with old friends and have some dinner.
Stephen will join younger brother Seth in the 3-point shootout Saturday night at the Spectrum Center and then play in his sixth straight All-Star game Sunday. Seth is planning on taking in a high school game at his alma mater, Charlotte Christian, on Saturday and Dell is being honored at the NBA Legends brunch on Sunday.
The fact that Seth is involved makes it extra special. Stephen said that the family group text was “buzzing” when everyone learned Seth was invited to compete in the 3-point contest.
Dell isn’t sure what to expect from his highly competitive sons.
“At my daughter’s wedding we played Liar’s Dice for about two hours and that was the most competitive thing I have seen in a long time,” the proud papa said with a laugh.
The NBA is accommodating the Currys with extra tickets, knowing how big of a weekend it is for the family. Stephen has his own guest list — separate from the rest of the family — and hopes to limit it to 30 people. The immediate family is staying in downtown hotels, which Stephen said feels “really weird.”
Some of the out-of-towners will stay at Dell and Sonya’s house while the couple bunks downtown so they can be close to family.
Dell was overjoyed that all of his kids — and their children — made it back to Charlotte.
Stephen is married to Ayesha and the couple has three children. Seth has a child with Callie Rivers, the daughter of NBA coach Doc Rivers. And the players’ sister, Sydell, who recently married Stephen’s Warriors’ teammate Damion Lee, a two-way player with Golden State, is in town, too.
Dell was beaming about the improvements to the Carole Hoefener Center, which was partly funded by the Currys.
“What makes me the proudest is that all the kids were here,” Dell said of the dedication, “everyone contributed and long after the All-Star game is gone kids in Charlotte will still be able to use the community center.”
___
More AP NBA: https://apnews.com/NBA and https://twitter.com/AP_Sports