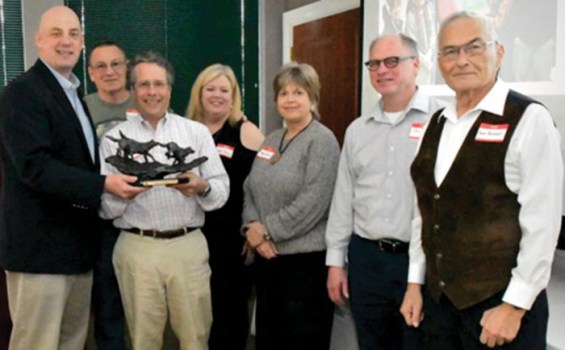 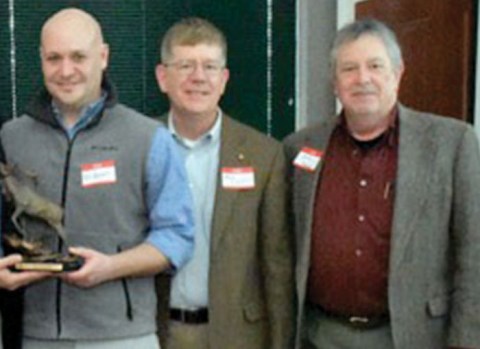 Three Rivers Land Trust hosted its third Conservation Awards on Feb. 8 at the Gateway Building in Salisbury. Winners were recognized for continued support of the agency’s conservation mission.

The Fred Stanback Conservationist of the Year Award went to Peter Hairston. Hairston, an ardent supporter of the Land Trust for many years, worked to protect an 1,800-acre historic plantation in Davie County. The Hairston family had maintained the property on the National Register of Historic Places since its origin in the 18th century.

The site features a Greek Revival plantation house, more than 4 miles of frontage along the Yadkin River, native hardwood forests and several large farm fields. Hairston was also the inaugural donor to the Land Trust’s Leopold Society that has introduced nearly 300 students to conservation across the state.

The Stanly County Convention and Visitors Bureau received the Jason Walser Governmental Conservation Partner of the Year award. The bureau supported many projects over the years and most recently partnered with Three Rivers to bring the nationally recognized Outdoor Channel fishing show “Major League Fishing” to the Yadkin-Pee Dee watershed.

The Bill and Nancy Stanback Conservation Partner of the Year award went to the Uwharrie Trailblazers. The group began in 2012 with trail enthusiasts who built a new section of trail on Little Long Mountain for the Land Trust. In the past several years, the group has worked with the U.S. Forest Service, Land Trust and Zoo Society to reconnect the historic trail from Jumpin’ Off Rock on Flint Hill Road to High Pine Church Road.

In 2013 the Trailblazers, along with Land Trust, led the first annual through-hike of the entire trail. The Uwharrie Trail Thru Hike is now in its seventh year.

Kacy Cook, biologist with the North Carolina Wildlife Resources Commission, received the Government Employee of the Year award. Cook has worked with Three Rivers to help with the transfer to the commission more than 700 acres in the Uwharries that is now available to the public for hunting and hiking.

The Volunteer of the Year award went to Bryant Roland. Bryant has cooked for numerous Land Trust events, including the Conservation Classic and Uwharrie Trail Thru Hike. He communicates the Land Trust’s mission to others across the central Piedmont and advocates for conservation of  natural resources. Roland and his wife, Misty, accepted the award.

John Cottingham was named Sportsman of the Year. Over the past year, he advocated for Land Trust and local conservation. He also dedicated his time and passion to help Land Trust create videos for the Giving Tuesday campaign, Sportsman Access Program and Year End Campaign.

Cottingham and his wife, Allison, accepted the award.

The Leopold Society School of the Year award was presented to Carolina International School. Anne Ellis, with the support of her parents, Steve and Louise, accepted the award on behalf of the school.

As the school’s primary Leopold Society instructor, Ellis engages her students through hands-on projects in the outdoors. This past year, students built and installed duck boxes, sampled and tested water quality from an on-campus wetland, and monitored wildlife diversity through track and scat surveys.

Cabarrus County received the County Chapter of the Year Award. Chapter members have expanded Land Trust’s visibility and membership base to increase awareness of conservation work in the central Piedmont.

This past year, the Cabarrus chapter hosted the inaugural Blue Jeans and BBQ membership event at Cabarrus Brewing. It brought in new members and funding for conservation. The chapter is scheduling several activities for 2019, including an overnight paddle trip.

Gary and Michelle Steeley, Anne Ellis and Mark Owensby accepted the award on the chapter’s behalf.

To learn more about how to support Three Rivers Land Trust, contact Michael Nye Fulk at 704-647-0302 or michael@landtrustcnc.org.