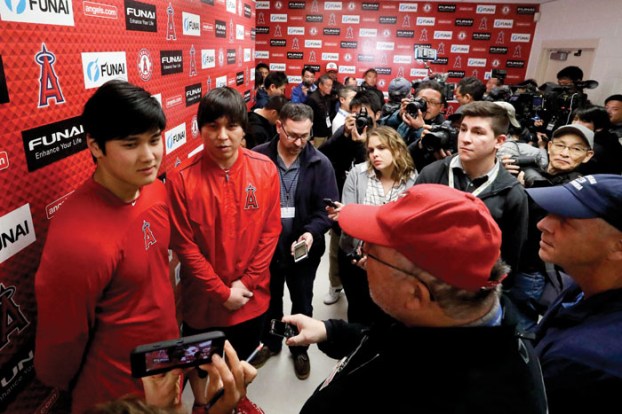 Ohtani has no regrets hitting through year, delaying surgery 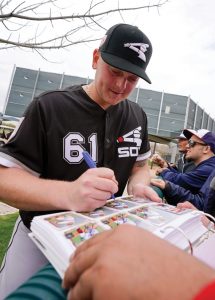 TEMPE, Ariz. (AP) — Shohei Ohtani tossed his water bottle toward a clubhouse garbage can and missed, instead landing it in a laundry bin. He laughed out loud, smiled big as he so often does, then retrieved the trash and put it in the proper place.

That’s about as close to throwing as the Japanese two-way star is right now.

Ohtani wouldn’t change how he handled his elbow injury late last year, continuing to hit for the Angels until season’s end even if it meant delaying reconstructive surgery and his ability to pitch again until 2020.

“I have no regrets about what happened last year. That’s what the team thought about me, the plan,” Ohtani said through interpreter Ippei Mizuhara. “In the end it didn’t work out but I still have no regrets.”

The reigning AL Rookie of the Year is recovering from an Oct. 1 Tommy John surgery with the hope he will be able to bat in the Los Angeles lineup as early as May if all stays on schedule.

“There’s a lot of variables. That’s the goal I’m shooting for but there might be some setbacks here and there,” Ohtani said. “If not, that’s what I’m trying to go for.”

At Tempe Diablo Stadium, the scene Wednesday was a far cry from a year ago when Ohtani showed up at spring training with fanfare and faced a huge media contingent following his every move. For now, the two-way star isn’t even on the field as he works out inside.

Even the second time around, “I feel just as nervous as last year, my first year.”

Ohtani acknowledged that’s partly because he’s behind schedule with the extensive rehab and will have to “catch up to everybody.”

“It’s going to be a slow process,” new manager Brad Ausmus said ahead of his club’s first on-field session for pitchers and catchers. “He gets his workouts in. Right now he’ll be mostly inside. We need to protect this guy long term, so we’re hoping for May but if it goes longer it goes longer.”

The 24-year-old Ohtani spent time back home in Japan this offseason working through his rehabilitation, which right now includes dry swings only in terms of his hitting preparation.

Ohtani said everything is going smoothly at this stage.

“So far there’s nothing in my elbow, I don’t feel anything there. It’s been great,” he said. “I just need to watch my effort level, try to keep it down and listen to the trainers.”

While the Angels can’t wait to get Ohtani healthy to hit, they won’t rush him. He and Albert Pujols are expected to share designated hitter duties, with Pujols playing first on days Ohtani hits — that is, if Pujols is physically fine and performing, otherwise Justin Bour becomes an option. The free agent first baseman signed a $2.5 million, one-year deal in December.

“That’s why we’re saying we’re going to be extremely cautious because we don’t want the fact that he might be able to DH affect him being able to pitch in 2020,” Ausmus said of Ohtani.

Ohtani has accepted this year will be about what he can do behind the plate.

“This season I’m obviously going to be prioritizing my hitting. That’s what I’m going to focus on right now,” he said. “We can push back the pitching because I’m not going to be pitching this season. So the plan is to get back hitting first and take it easy on the pitching side.”

Notes: RHP Daniel Hudson is in camp after signing a minor league deal and getting an invite to big league spring training. If added to the 40-man roster, he would get a $1.5 million salary in the major leagues and would have the chance to earn $1.5 million in performance bonuses for games: $100,000 each for 20, 25, 30, 35 and 40, and $200,000 apiece for 45, 50, 55, 60 and 65. … 1B/DH Albert Pujols, who had season-ending knee surgery in August followed by the elbow procedure in September to remove bone spurs, will be worked in slowly. “Right now he’s capable of doing everything but we are going to monitor the workload,” Ausmus said. “We’re going to manage the workload to try and avoid any issues with most specifically the knee.” The 39-year-old slugger batted .245 with 19 homers and 64 RBIs playing 117 games in his 18th season. He has 633 career home runs.

Machado, among the offseason’s top free agents, still hasn’t agreed to a deal. Alonso spoke with the All-Star infielder on Tuesday.

Chicago hasn’t had a winning season since 2012 and is coming off a 100-loss season. The White Sox have added Alonso, right-handers Ivan Nova, Kelvin Herrera and Alex Colome, and outfielder Jon Jay.

Dozens of free agents remain on the market.

“It seems that moves drifting into spring training is becoming a bit of the new normal,” general manager Rick Hahn said. “We try to be disciplined in terms of our focus. Certainly we don’t want to spend any time negotiating through the media or talking about where things sit publicly until there’s some finality.”

For now at least, Hahn said, “The focus is going to be on the guys in the room, and putting them in the best position to win.”

“We’re all excited about all the possibilities as we’re moving forward, because now the time has been put in,” Renteria said.