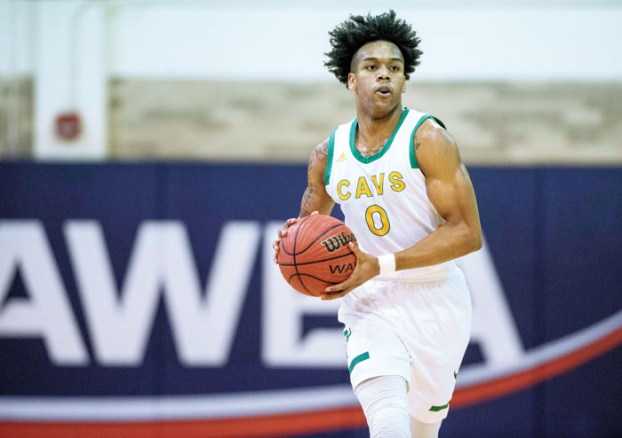 Jon C Lakey file photo/ SALISBURY POST ... North Rowan’s Brevin Goodlett (0), shown during a game against North Stanly in the Sam Moir Christmas Classic, led the Cavaliers to a 79-41 win over the Comets on Wednesday night in Spencer.Goodlett had 26 points and 10 rebounds in last night’s game.

SPENCER — For two and a half quarters, Wednesday night’s Yadkin Valley Conference battle between rivals North Rowan and North Stanly lived up to expectations.

Then the host Cavaliers moved to a higher plane, producing an unexpectedly lopsided 79-41 win.

Perhaps it was Senior Night, or defensive intensity or dominating rebounding or a little bit of everything that did the trick. North Rowan was just not going to be denied in this final regular season game at home.

“Being at home and being Senior Night, I knew our guys were going to be jazzed,” said North Rowan head coach Jason Causby. “You just hope they don’t come out too jacked up. I thought we did a great job on offense. We got great looks and made the shots.”

The outcome wrapped up a remarkable regular season for North Rowan as they finished 21-2, with a perfect 16-0 mark in the YVC. One of its two losses came to North Stanly in the Sam Moir/Dale’s Christmas Classic and their second meeting in January was a one-point nail-biter, 44-43 — a win for the Cavaliers.

Last night’s rubber match started much the same as the Cavaliers ran into some serious foul problems for two key players, forward Dayjuwon Cooke and point guard Derrick Page, who each had three personals as the second quarter started. That development caused North Rowan to change defensive tactics and go to their deep bench to try to weather the storm.

“When our two guys got into foul trouble, we just had to keep up the intensity and play good, smart defense,” said senior Brevin Goodlett, who carried the offense with 26 points and 10 rebounds, most of them on the offensive boards. “They (North Stanly) had eight offensive rebounds in the first half, so coach told us to get a butt on them and box out.”

The Cavaliers led by 16-13 early in the second quarter when Zay Davis and David Broaddus came off the bench to spark a run and go up nine. But the Comets (14-9, 10-5 YVC) refused to go away as star guard Bryson Childress, Koby Poole and 6-6 center Nalik Veasley-Johnson led a charge to keep the margin at three points, 30-27, at halftime.

The first half also produced a significant milestone for Childress, a 5-10 sharpshooter, who came in to the game with 1,994 career points and Stanly County’s all-time scoring record. Midway through the opening quarter, Childress drained a pair of 3-pointers and a layup to surpass the 2,000 point career mark.

What happened after that was even more impressive, especially for the Cavaliers, as they found a way to shut down the high-scoring Childress, especially in  the second half, keying the lopsided victory.

Childress came in averaging almost 30 points per game and by halftime last night he had 13. But in the second half, the North Rowan defense stifled him, allowing just a single free throw the rest of the game.

“Childress is a phenomenal scorer who is going to take his shots,” Causby noted. “We just try to make him work for every shot he takes.”

With Childress having a rare, bad shooting night, the rest of the Comets were unable to fill in the gap in the second half. While Goodlett, Cooke, Page and company were rolling up second half numbers, North Stanly managed just 14 points in the final two quarters, including six in the final stanza.

North Rowan led, 35-31, in the third period when Goodlett and Page scored five quick points each to suddenly make the margin 47-33. The scored was 50-35 after three quarters, then a 7-0 run to open the final period erased all doubt about which team was superior on this night.

“After Cooke and I had those fouls in the first half, I knew we just had to pick up the intensity and be physical.” said Page, the 6-3 senior guard. “Going undefeated in this league, going 16-0, is not an easy thing to do. But we are going to take every game from here on out very seriously.”

All 12 Cavaliers players got into the game with 11 of them contributing to the scoring. Goodlett (26) and Cooke (10) led the way with nine points for Page and seven each for Broaddus and Kendell Goodes.

Childress was the only Comet in double figures for the night.

North Rowan has already secured a number one seed for the upcoming state 1A playoffs but for now, its sights are set on next week’s YVC Tournament. The opening round is Tuesday at home and wraps up Friday night at South Davidson.

North Stanly closes the regular season on Friday at Gray Stone then moves to the league tournament next week.

NOTES: Prior to the boys’ game last night, the capacity crowd saluted all senior boys and girls basketball players and senior cheerleaders, in a brief ceremony.

North Rowan’s Cooke now has 952 career points and should reach the 1,000-point career mark in the coming week, as long as his team keeps rolling.