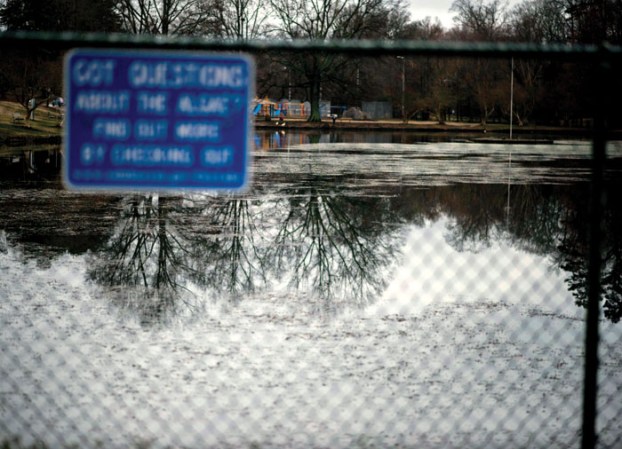 City Park Lake has a sign on the fence directing questions about the algae that appears to fill the pond to city of Salisbury website. Jon C. Lakey/Salisbury Post

SALISBURY — When City Park Lake was last inspected, there were two specific concerns — the muskrat population and seepage.

Craig Powers, assistant public services director for the city, said the seepage could be a result of the wet fall and winter Salisbury had, but muskrats continuing to burrow holes in the dam could be problematic.

The lake also has a decreased depth because of increased sediment. Hydrilla, which the U.S. Fish and Wildlife Service calls the “world’s worst invasive aquatic plant,” has trapped sediment and algae.

The lake also has an invasive species string algae. Both are currently being chemically treated, but hydrilla is highly resistant to treatment.

In October, grass carp was added to the lake as a form of pest management.

“We have to fix the dam,” Powers said. “If we don’t do something with the dam, it will be a swamp.”

The Public Services Department requested funding for maintenance at the City Council retreat on Tuesday.

The department will have a lake management company survey the lake and dam, which will cost $9,000. Then, it will provide an estimate for how much dredging would cost. Powers said the department expects it to cost about $200,000. The dam repair and replacing granite stone that has fallen into the lake are estimated to cost $50,000.

Dredging, last done in 1996, comes with two options — mechanical or hydro. Mechanical requires the lake to be drained. While the repairs would be easier to make, the fish population would not survive, Powers said.

Hydro dredging is less impactful to the lake and works similar to a vacuum cleaner. It would drain out the invasive species and silt to be composted or used for its nutrients.

The dredging process may require the city to remove some willow oak trees that could be damaged by the trucks.

The North Carolina Department of Environmental Quality’s Division of Energy, Mineral and Land Resources requires the dam to be inspected and to submit a dam emergency action report — a protocol of any high-hazard dam. The dam is considered high-hazard because it’s under roads and close to neighborhoods.

However, Powers said the dam is structurally sound and that he does not expect it to fail.

Along with maintenance for the lake, Powers said the project could be an opportunity to partner with the Parks and Recreation Department for enhancements to City Park. That would be a two-year process, costing $250,000, and include sidewalks around the lake as well as piers, boardwalks and improvements to the lawn area.

As this week’s City Council retreat wrapped up, council members were asked to prioritize 33 action items, some of which include providing funds. Maintenance of the lake was one of them. Councilwoman Karen Alexander said providing lake maintenance funding should be highly considered.

“Although we may not consider that to be a priority when we came in here, now we know that the state has said you have to fix the dam, so that’s moved up,” Alexander said.