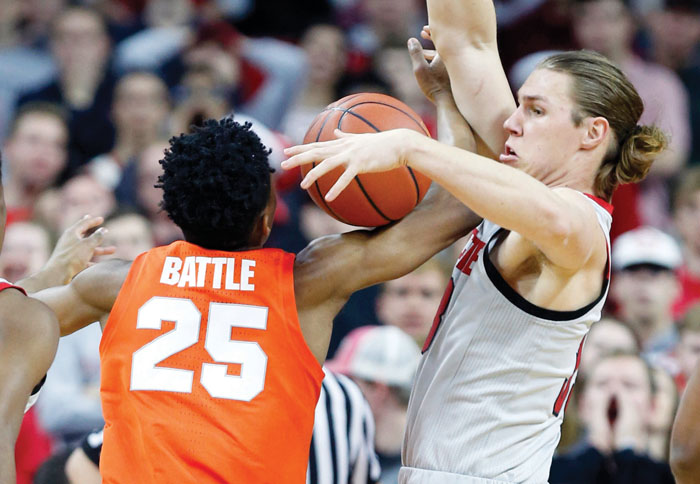 RALEIGH (AP) — Now this is how Braxton Beverly and North Carolina State expect things to go at home.

“At home, we’ve got to protect our house and play with energy and passion,” coach Kevin Keatts said.

“We did it on the defensive end,” Keatts said. “We scored 73 points, but our defense is what won the game for us.”

N.C. State shot 64 percent in the second half, pushing its lead into double figures to stay with a 14-0 run midway through the half keyed by Beverly.

In his last home game — a 47-24 loss to Virginia Tech on Feb. 2 that set all sorts of futility marks for the school and the conference — Beverly was 0 for 12 and missed nine 3s. He then hit 9 of 14 attempts from lone range in the two games preceding this one.

Then, squaring up against the Orange’s trademark 2-3 zone defense, Beverly hit four of the Wolfpack’s five 3-pointers while matching the scoring high he set last month in a home loss to North Carolina.

“That’s the guy that I believe in,” Keatts said. “He could come out and go 0 for 20, and then I know the next time he comes out, he’s going to play. I’ve never, ever questioned his ability to make shots. I love the kid. … I wish that every kid that I recruit at N.C. State is like Braxton Beverly. Works hard, great kid, low maintenance.”

Syracuse: The Orange just couldn’t hit anything, no matter where they shot it from. Syracuse was 5 of 25 from 3-point range and made just 11 of 22 free throws — only once all season has Syracuse been worse from the line, when they shot 39 percent in a loss to Buffalo. The Orange fell to 0-6 against power-conference opponents when its overall shooting percentage was in the 30s.

“We’re not winning many games shooting 20 percent from the 3 and 35 from the 2,” coach Jim Boeheim said. “We’re just not going to win with offense like that. … Can’t miss free throws and open shots on the road, and that’s what happened tonight.”

N.C. State: The Wolfpack had an uncharacteristically lonely bench, because one of the ACC’s deepest groups of subs was down a couple of men after Eric Lockett (personal reasons) and Blake Harris (illness) were unavailable. N.C. State’s bench combines to average 31.3 points and the three reserves Keatts used in this one came through with 21 points.

Sacha Killeya-Jones was not on the N.C. State bench and Keatts said the Kentucky transfer “is currently not a member of our program” but did not elaborate. Killeya-Jones is sitting out this season to comply with NCAA transfer rules.

This was just the second road loss in conference play for Syracuse, which has a victory over No. 2 Duke at Cameron Indoor Stadium to its credit. . N.C. State was 20 of 24 from the free-throw line. . Dorn scored 14 points after halftime. … All four of the Orange’s ACC losses have come by double figures.

N.C. State: Makes the short trip across the Triangle to face No. 2 Duke on Saturday night.

Jim France leading change at NASCAR from the shadows