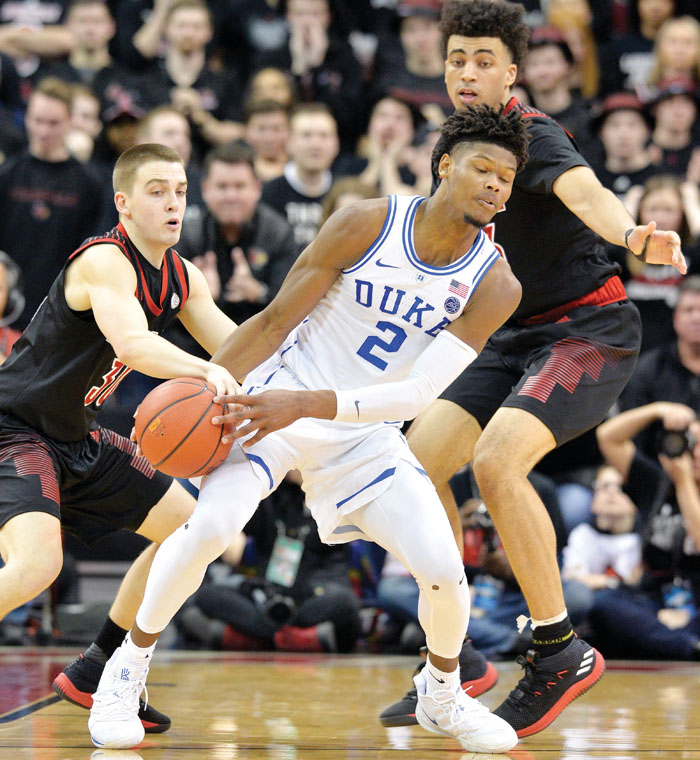 By GARY B. GRAVES, AP Sports Writer
LOUISVILLE, Ky. (AP) — Looking tired and beaten while trailing Louisville by 23 points, Duke coach Mike Krzyzewski told his players they would win the game.
Whether he believed it or not didn’t matter. The Blue Devils bought in and found their energy in the final 10 minutes to mount one of their biggest comebacks ever.
Cam Reddish made a tying 3-pointer with 1:28 left and the go-ahead free throws with 14 seconds remaining, helping the No. 2 Blue Devils overcome a second-half deficit to beat the No. 16 Cardinals 71-69 on Tuesday night.
“I think our mentality changed,” Reddish said. “We didn’t want to go home with a loss. We had to fight for Duke, just give it our all for the name on our chest.”
After making 2 of 17 shots to open the second half, Duke (22-2, 10-1 Atlantic Coast Conference) got hot to make 9 of 13 and shut down the Cardinals over the final 9:54. Zion Williamson (27 points, 12 rebounds) ignored foul trouble and instead drew whistles in his favor, making 8 of 9 from the line before Reddish added a couple of 3s in between free throws — the last two of which followed an official review of a play under Duke’s basket.
Christen Cunningham tried to tie it for Louisville (17-8, 8-4), but his jumper in the lane bounced off the rim and into Williamson’s hands as the final seconds ticked off. The Blue Devils celebrated loudly as they left the court after completing the second-biggest second-half comeback in program history.
“It just took us playing hard,” Williamson told ESPN after the game. “They were playing harder than us. Louisville’s a very great team, but we just had to play harder than them.”
Not even Coach K could grasp that rally.
“I did think we could play better,” he said. “I was positive, but I don’t know, belief. … At that point, I may have been telling them a lie.”
The ploy worked because the Blue Devils also clamped down defensively with a combination of press and 2-2-1 zone that forced 13 second-half turnovers and left the Cardinals forcing passes and shots.
“Give Duke great credit. Their kids never quit,” Louisville coach Chris Mack said. “They battled, they turned us over what seemed like a thousand times in the last four or five minutes. I’m stunned.”
Reddish scored 16 of his 22 points after halftime and RJ Barrett added 13 for Duke, which won its eighth in a row despite shooting a season-low 37 percent from the field.
Jordan Nwora had 23 points and Dwayne Sutton 15 for Louisville, which dropped its second straight. The Cardinals shot 42 percent, but just 9 of 24 in the second half.
POLL IMPLICATIONS
Duke continued its pursuit of the No. 1 spot with a gutsy rally. Louisville has work to do against Clemson if it wants to stay in the AP Top 25.
BIG PICTURE
Duke: The Blue Devils looked flat for 30 minutes and seemingly couldn’t make anything from the field. But they regrouped and came away with a strong, if ragged, follow-up to their win over Virginia. They were outrebounded 41-39 but came up with needed boards in the clutch.
Louisville: Instead of bouncing back from a mistake-prone overtime loss at Florida State, the Cardinals are left wondering as they let one slip away. Seemingly in control for the first 10 minutes of the second half, they became tentative. They missed shots in the process and lost a chance to earn a signature win that could’ve strengthened their conference title hopes.
UP NEXT
Duke hosts North Carolina State on Saturday in the lone meeting between the Tobacco Road schools.
Louisville hosts Clemson on Saturday.
___
More AP college basketball: https://apnews.com/Collegebasketball and https://twitter.com/AP_Top25