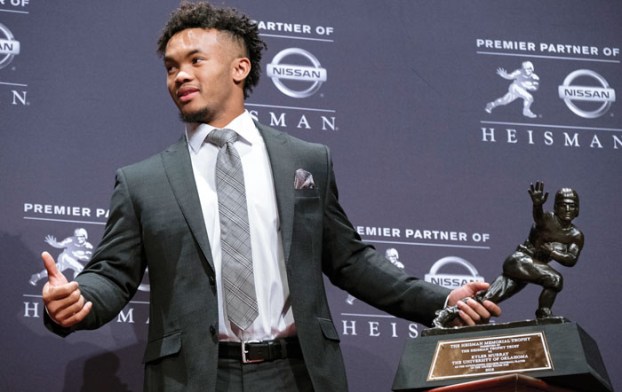 FILE - In this Dec. 8, 2018, file photo, Oklahoma quarterback Kyler Murray holds the Hesiman Trophy after winning the award in New York. Murray's locker remained empty on Monday, Feb. 11, 2019, in the spring training clubhouse of the Oakland Athletics, who say they are uncertain when or if the Heisman Trophy winner will report to the baseball team he signed with last summer. Billy Beane, Oakland’s executive vice president of baseball operation, said talks are continuing with Murray, who may drop baseball to pursue an NFL career. (AP Photo/Craig Ruttle, File)

How many Kyler Murrays are out there in specialization era?

Kyler Murray has chosen football over baseball, at least for now. It is anyone’s guess when the world will see another athlete with the skills and opportunity to have such a choice.

The Oakland Athletics selected Murray ninth overall in the Major League Baseball draft last June. He then went out and won the Heisman Trophy in his only year as Oklahoma’s starting quarterback, declared for the NFL draft last month and picked the NFL over MLB on Monday.

Few athletes have positioned themselves to have such dynamic options. And in this age of youth sports specialization, it may become rarer still.

Deion Sanders played pro football and baseball, and “Prime Time” has a special place in his heart for athletes who excel at a high level in both sports. He wishes more young men had the same opportunities as Murray, but laments that youth sports coaches often encourage kids to pick one main sport at an early age.

“You’ve got some idiot in a youth league telling a kid, ‘If you just focus on this one thing, you’re going to be great,’” Sanders said. “Then, you’ve got the same (kind of) idiot in high school — ‘You’re not going to play this other sport because I’m not going to let you start until you dedicate yourself.’”

Sports specialization has drawn a lot of attention in recent years, with baseball greats such as John Smoltz suggesting it can hurt young players simply because of the wear and tear. Still, many believe it has its place.

After all, most athletes don’t have the gifts of Murray, Sanders or Bo Jackson, the 1986 Heisman winner for Auburn who was an All-Star for the Kansas City Royals in 1989 and made the Pro Bowl for the Los Angeles Raiders in 1990. Tom Westerberg, Murray’s football coach at Allen (Texas) High School who now coaches at Barbers Hill (Texas) High, said even the really good ones often are best served honing their skills in one sport.

“Athletes like him (Murray) come around once in a long time, with that athletic ability and been doing it for that long,” Westerberg said. “How many Deion Sanderses have there been? You can name the Bo Jacksons, the Deion Sanderses — you can name those guys on one hand. So it’s not that all of a sudden you tell a kid to play multiple sports and you’re going to get a ton of Kyler Murrays and Deion Sanderses.’”

And having options comes with complications and questions.

Back in 1992, Sanders played cornerback for the Atlanta Falcons during the day in Miami, then flew to Pittsburgh to join his Atlanta Braves teammates for a National League Championship Series game. Sanders looked back at that day during a recent ESPN documentary called “Deion’s Double Play.”

Sanders’ true love was football, and it was his focus. He is in the Pro Football Hall of Fame and had a productive baseball career, but he offered a glimpse of what might have been during the 1992 World Series, when he hit .533 with four runs, eight hits and two doubles in four games.

“I regret often that I didn’t put a lot more into the game of baseball,” Sanders said. “I really do. I have those thoughts often.”

Oklahoma baseball coach Skip Johnson said being special in both sports requires brains, too. Murray said he has been clocked at 4.3 seconds in the 40-yard dash, yet Johnson said his unusually high intellect is what allowed him to progress in both sports.

“To have the thought process that Kyler has, to go through the things that he has, to learn (Oklahoma football coach) Lincoln Riley’s system, to learn our system in baseball — it just goes to show you what kind of aptitude that guy has as an athlete,” Johnson said.

Dr. Mininder Kocher, a professor at Harvard Medical School and associate director of the Division of Sports Medicine at Boston Children’s Hospital, has contributed to research that shows youth sports specialization is on the rise. He said the fact that Murray played both football and baseball for so long might have helped him excel in both.

“On one hand, he clearly is sort of a unique athlete — maybe genetically or maybe just intrinsic athleticism that he can be so good at two different sports,” Kocher said. “Some of that might just be a blip, that he’s that good of an athlete. Part of it is that there are transferrable skills.”

Murray’s success makes Johnson more than willing to look for more multi-sport superstars. Last season, Murray hit .296, had a .556 slugging percentage and hit 10 home runs in 189 at bats for the Sooners.

“There’s more athletes out there that can do the same thing,” Johnson said.

By Paul Newberry AP Sports Columnist Spring training opens in a few days. It won’t seem quite the same without... read more