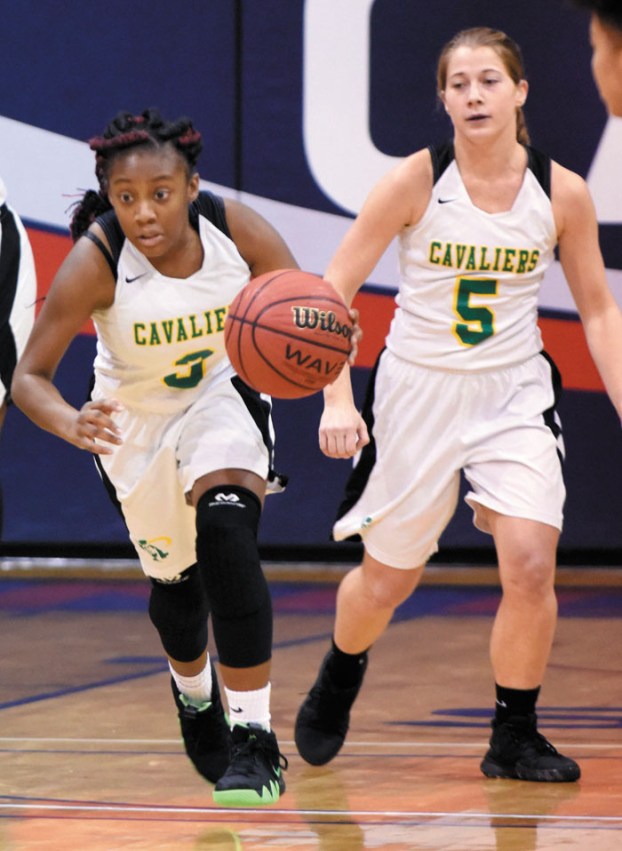 North Rowan seniors McKenzie Shoaf, Taren Sherrill and Aubree Cain will remember that they won on Senior Night. They may even remember that the final score was 63-39 and that the Yadkin Valley Conference opponent was North Stanly.

Shoaf, who has made all-county softball and volleyball teams for the Cavaliers, will remember that she played the best basketball game she ever played on Wednesday and scored a career-high 14 points.

Sherrill will probably remember with a laugh that she made a technical free throw after North Stanly drew a whistle from officials for having six players on the floor.

North Rowan’s first-year coach Lamar Wilkerson will remember Shoaf grinning after each shot she made. He’ll also remember Cain and Sherrill diving on the floor after a loose ball with the Cavaliers ahead by 22 and with a minute left on the clock.

“We played well as a team tonight, and I think that’s what I’ll remember most about all this,” Shoaf said. “It was an exciting night. This team has a good connection. This team feels like a team.”

Shoaf and Sherrill played a little on the varsity as freshmen when North Rowan was still very strong. The Cavaliers were 19-8 that season with players such as Aliyah Farmer and Special Washington and beat Carson for the Christmas tournament title.

But the last two seasons have been tough — 4-18 and 7-17. This season the struggling was supposed to continue, but the Cavaliers are a surprising 13-11 overall, which means they’ve wrapped up a winning season. North Rowan finished 11-5 in the YVC.

“If you’d told me four months ago, we’d be where we are now, I wouldn’t have believed it,” Wilkerson said. “My hope was just to lay a good foundation this season, to start building for the future and to trust the process, but these girls have exceeded all expectations.”

North Rowan was coming off back-to-back losses to Gray Stone and South Davidson, but everything went right on Senior Night. The Cavaliers came out with terrific energy on both ends of the floor. They were flying around, running the floor, and knocked the visitors back on their heels.

“I had no doubt they would bounce back,” Coach Wilkerson said. “I was so proud of our seniors. They’ve given us so much this season. They’ve had to deal with a lot. There was talk of their school closing after this year, but I just told them to go out every night and be the best they’ve ever been.”

“They just blindsided us,” North Stanly coach Greg Speight said. “The first time we played them we just stood back in a zone and let them miss from outside. But tonight they were making 3-pointers. In the first half they were as good as anyone we’ve seen all season. If they can play like that, they can win our conference tournament.”

North Rowan didn’t play as well in the second half, but the Cavaliers had done enough. The Comets (6-14, 5-10) couldn’t make any kind of run.

Lexi Goode had 16 for North Stanly, while Camille Shelton had 13.

Coach Wilkerson’s widest smiles came when he talked about Shoaf, whose mother, Jennifer, coached Salisbury High to 167 wins in 11 seasons, including the  2004 2A state title.

“McKenzie has always been a hustling player for us, but we’ve seen a change in her the second half of the season,” Coach Wilkerson said. “She’s never scared to shoot. Her confidence has grown so much.”

North Rowan will get to play at least one more home game. The Cavs will host a first-round YVC tournament game next week.

Blue Bears lose on the road at Fayetteville State