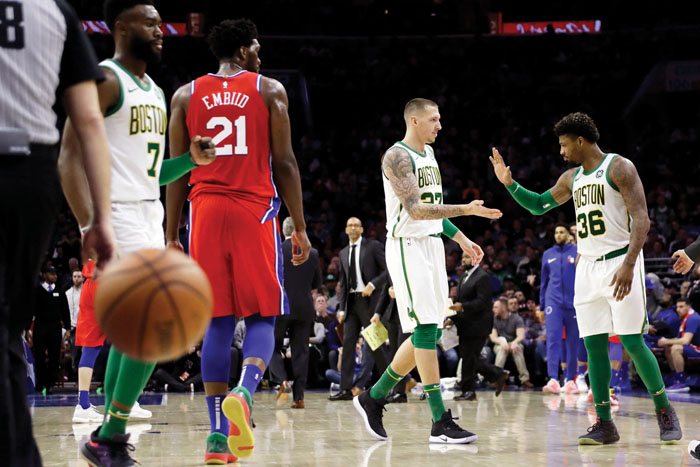 Boston Celtics' Marcus Smart (36) and Daniel Theis (27) celebrate after the Philadelphia 76ers called a timeout during the second half of an NBA basketball game, Tuesday, Feb. 12, 2019, in Philadelphia. Boston won 112-109. (AP Photo/Matt Slocum)

PHILADELPHIA (AP) — Gordon Hayward scored 26 points, including a go-ahead 3-pointer with 1:50 remaining, and the Boston Celtics beat the Philadelphia 76ers 112-109 on Tuesday night.
Al Horford had 23 points and Jayson Tatum scored 20 and grabbed 10 rebounds to help the Celtics continued their dominance over the Sixers.
Playing without All-Star point guard Kyrie Irving, who sprained his right knee Saturday night, the Celtics beat Philadelphia for the third straight meeting this season after defeating Philadelphia in five games in the Eastern Conference semifinals last season.
Joel Embiid had 23 points and 14 rebounds and Jimmy Butler scored 22 for Philadelphia.
Butler couldn’t get a desperation 3 off in time before the buzzer sounded as the Sixers dropped their first game in three since acquiring Tobias Harris in a flurry of moves last week.
WARRIORS 115, JAZZ 108
OAKLAND, Calif. (AP) — Stephen Curry overcame a sluggish night shooting and made a pair of pivotal 3-pointers in the fourth quarter, Kevin Durant had 28 points and seven assists, and the Warriors rallied from behind for the third consecutive game and beat the Jazz.
Curry had 24 points on 8 of 19 shooting. The two-time MVP missed his first five shots beyond the arc and finished 5 of 14 on 3s.
Klay Thompson scored 22 and DeMarcus Cousins added 12 points and 10 rebounds to help Golden State to its fourth straight win and 16th in 17.
Donovan Mitchell had 25 points and seven rebounds for Utah. Rudy Gobert added 13 points and 16 rebounds. Gobert’s double-double is his 46th of the season.
The Warriors came back from 17 down to beat Phoenix on Friday and were down 19 to Miami on Sunday before winning. Both of those deficits were at halftime.
This time Golden State fell behind 91-84 early in the fourth before going on a 21-4 run.
HAWKS 117, LAKERS 113
ATLANTA (AP) — Rookie Trae Young had 22 points and 14 assists, John Collins also scored 22 points despite foul trouble, and Atlanta beat Los Angeles.
The Hawks snapped a three-game losing streak despite a triple-double from LeBron James, who had 28 points, 16 assists and 11 rebounds.
The Hawks scored just seven points in the final 6:33 but managed to hold on. Taurean Prince delivered a key 3-pointer with 1:48 remaining, and Young darted past James for a lay-in and a foul that thwarted any hope of a Lakers comeback.
Kyle Kuzma and Brandon Ingram scored 19 points apiece for the Lakers.
MAGIC 118, PELICANS 88
NEW ORLEANS (AP) — Disgruntled star Anthony Davis scored three points on 1-of-9 shooting, outplayed badly by big man Nikola Vucevic as Orlando beat listless New Orleans.
Davis played 24 minutes in his third game since his agent told New Orleans the six-time All-Star wanted to be traded to a championship-contending team and won’t sign an extension with the Pelicans.
Vucevic had 25 points and 17 rebounds, Evan Fournier scored 22 points, and Jonathan Isaac scored a career-high 20 points, including 16 in the first quarter, when Orlando raced to a 39-11 lead.
SPURS 108, GRIZZLIES 107
MEMPHIS, Tenn. (AP) — LaMarcus Aldridge scored 22 points, including San Antonio’s final seven, as the Spurs broke a four-game losing streak by beating Memphis.
Memphis rookie Jaren Jackson Jr. had a chance to tie the game with two free throws with a second left. He missed the first, and, in attempting to miss the second, banked it in, allowing San Antonio to run out the clock.
Memphis was led by a career-high 33 points from Avery Bradley, acquired from the Los Angeles Clippers at the trade deadline. Jonas Valancunius, also a trade deadline acquisition, had 23 points and 10 rebounds.
Patty Mills also scored 22 for San Antonio.
___
More AP NBA: https://apnews.com/NBA and https://twitter.com/AP_Sports