Carson uses 17-2 run to pull away from Falcons 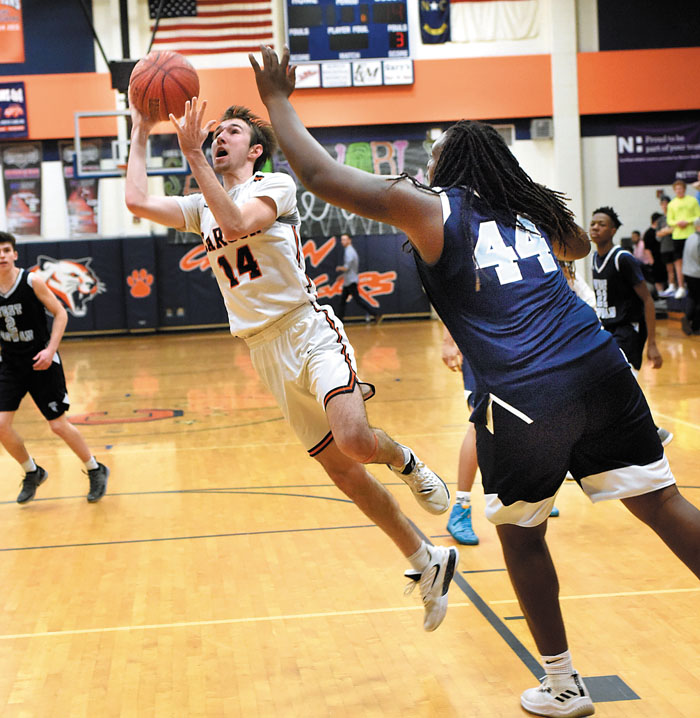 The Carson junior took a flip pass from teammate Cole Perry, bulldozed along the right baseline and scored on a powerhouse jam late in the third quarter — igniting a swollen crowd and triggering a 70-58 NPC victory over visiting West Rowan.

“I think it was a miscommunication on their part and Cole saw me,” said Clark, a 6-foot-3 junior who scored all 16 of his points in the second half. “We saw an opportunity and I took it.”

And with it, Clark launched a 17-2 run that broke open a tense, intra-county battle and kept the Cougars (12-10, 7-2) a game behind league-leader Statesville with one game remaining. Carson received 18 points apiece from Perry and sophomore A.J. Mauldin, knocked down eight 3-pointers and limited West to one basket from beyond the arc.

“They are not an easy team to beat,” Carson coach Brian Perry said after the Cougars won for the fifth time in their last six games and swept the regular-season series from West (4-19, 2-7). “But we made that little run at the end of the third quarter and then talked about stretching it out while we could. We didn’t have a great fourth quarter, we missed too many free throws, but we held on and got a good win at home.”

Despite suffering its seventh loss in nine games, West spent much of the night repairing cracks in its foundation. Coach Mike Gurley gave his team another A for effort, but pointed to Carson’s 10-0 spurt that closed the third period as decisive.

“There was a three-minute stretch where we didn’t play very good team defense,” he said. “We gambled. We left shooters open — and they made us pay for that.”

Let’s set the scene. West overcame a 16-6 first-quarter deficit and went ahead, 40-39, when sophomore Jalen Moss completed a three-point play with 2:15 left in the third quarter. A.J. Mauldin’s 3-ball from the left side helped Carson reclaim the lead and Clark’s volcanic stuff made it 44-41 with 1:38 to go.

“All of our energy came off E.J.’s dunk,” said Cole Perry, one of three Carson seniors recognized before tipoff. “Both offensively and defensively. The gym was hyped, everybody was into it.”

A minute later, Perry took a penetrate-and-kick feed from Mauldin and swished a 20-foot dagger from the top of the key, providing a 49-41 cushion and turning the Carson student section into a human trampoline. “I was comfortable taking that shot,” he said. “Shooters are gonna shoot.”

Clark’s three-point play with no time on the clock  gave the Cougars an 11-point lead after three — an advantage that grew to 65-50 in the fourth quarter. West’s only 3-pointer was well-stroked shot by Moss with 3:06 to play.

“You have to give Carson the credit for that,” Gurley said. “They played us man-to-man and didn’t give us any open shots.”

“Mark Spry had him all night,” said Coach Perry. “He’s done such a good job the last four or five games — ever since we played West Rowan last time (a 67-60 win on Jan. 25). We put Mark on Stolsworth that night and I think he held him to eight. Mark has this length and he’s buying into that role of being a stopper.”

Afterward, Clark acknowledged the Cougars still have work to do before next week’s NPC tournament at Statesville.

“We’ve got to communicate better and box out better,” he said. “We can’t get comfortable.”

NOTES: Carson will try to secure second place in the standings — and a first-round bye in the conference tournament — with a win at South Iredell on Friday. It routed the Vikings, 89-68, on Jan. 29. … West closes its regular-season Friday with a home game against Statesville.