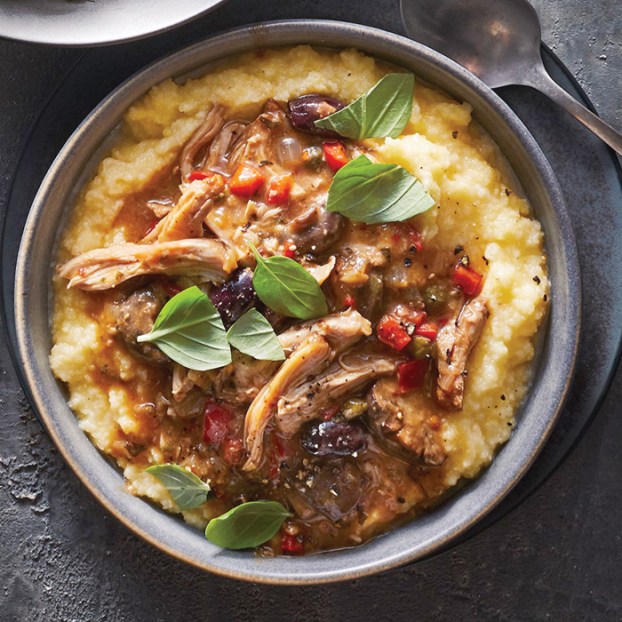 Eating Well Try making chicken cacciatore in your slow cooker and serve it over polenta.

Slow is the way to go for flavor-filled meals

As we’re seeing, winter is not over yet, but since we had that taste of spring, it’s been hard to think of anything else.

Still, you have to feed yourself, and as the days get longer, maybe you want to throw something in your slow cooker and have it waiting for you when you get home.

Stews, soups and chilis are all good and easy to set up for long, slow cooking, but there’s more out there, too.

Try something a little different — surprise your family with a dinner that combines out-of-the-ordinary flavors.

Most cuts of meat can stand up to slow cooking, but big cuts, like brisket, do especially well, needing the time and mositure to break down the fibers of the meat into something succulent and tender.

Chicken thighs hold up well, and can be as easy as adding half a jar of orange marmalade and a whole, diced onion to the slow cooker. Or throw in a cup or so of your favorite salsa, and you can use the chicken as is, put it in a burrito or taco or wrap it in an enchilada and sprinkle it with lots of grated mozzarella.

A slow cooker is a good way to combine a variety of diverse flavors.

Transfer the mixture to a 6-quart slow cooker. Stir in chicken, tomatoes, broth and capers. Cover and cook on low for 8 hours.

Transfer the chicken to a clean cutting board. Let cool for 5 minutes. Remove bones and return chicken to the slow cooker. Stir in olives and the remaining 1/4 tsp. salt. Cover to keep warm.

Meanwhile, bring water to a boil in a medium saucepan over medium-high heat. Whisk in polenta; cook, stirring often, until thickened, about 3 minutes. Remove from heat and stir in Parmesan. Serve the chicken and sauce over the polenta, topped with basil.

Heat the oil in a large, deep pan or cast iron skillet over medium heat until shimmering. Add the onions and cook on medium-low to medium heat, stirring frequently until onions have caramelized lightly, about 20 minutes. Meanwhile, sear the brisket.

Pat the brisket dry with paper towels. Season generously all over with salt and pepper. Heat a large skillet over medium-high heat and turn on your vent or fan, if you have one. Add the brisket and sear, flipping once, until a golden brown crust forms. Transfer to a 6-quart or larger slow cooker, fat side up. Sprinkle the minced garlic over the brisket.

When the onions are ready, pile them on top around the meat. Mix the broth, Worcestershire sauce and soy sauce or tamari together and pour into the slow cooker.

Cover and cook until the brisket is very tender, 6-8 hours on low. Switch to warm setting and let rest for at least 20 minutes.

The brisket can be sliced or shredded immediately and served with the onions and juices.

Combine yogurt, heavy cream, coconut milk and tomato paste. Add in the remainder of the ingredients, except cilantro, and stir well. Place the mixture into the slow cooker and turn heat to low and cook for 6-7 hours on low or 4 hours on high. Serve over rice and top with cilantro.

Place 2 cups bread cubes in a greased 3 or 4-quart slow cooker. Layer with half of the apple mixture and 2 cups bread cubes. Repeat layers. Cook, covered, on low 2-3 hours or until apples are tender. Stir before serving. Top with whipped cream or vanilla ice cream.

Screen time: ‘I don’t think we’re as busy as we say we are’