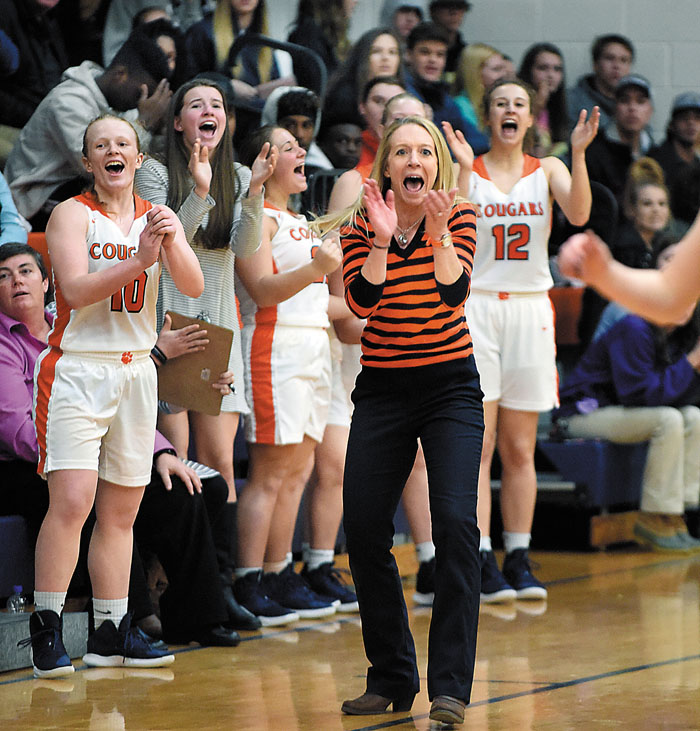 So how in the world did Carson win the North Piedmont Conference struggle, 62-57?

“I’m still not sure how it happened with a stat like that,” Carson coach Brooke Stouder said. “We got out-rebounded badly on a night when we weren’t shooting well, but we still won against a very good team. We did play incredibly hard in the second half and the last two minutes of the first half. That was a big part of it.”

Carson (22-1, 8-1) prevailed and took an outright conference title for the first time in school history.

“This was big for us to win it alone,” Stouder said. “We’d won two regular-season championships, but we’d shared them with North Iredell.”

Carson won mostly because tiny guard Maci Cooper was amazing in the first half and because it held its own in the paint and on the boards in the second half after getting thoroughly demolished in the first 16 minutes by West towers Abigail Wilson and Whitley Arnott.

Wilson had a string of put-backs early as the Falcons stormed to a 14-9 lead after a quarter. West was shooting poorly from outside, but it didn’t matter. Second-chance points were piling up.

“For some reason, we were standing around and not playing hard at all,” Stouder said. “Our defense wasn’t what we want it to be.”

West (18-5, 5-4) got 3-pointers from Cindy Connolly and Gabby Blabon in the second quarter and Wilson didn’t slow down.  Carson stayed in the game only because of Cooper, who is barely 5 feet tall. She scored 12 of her 19 points in the second quarter, including a couple of 3s, and Carson made it to halftime down, 32-29.

“My shot just felt right,” said Cooper, who also shines in softball, tennis and track and field for the Cougars. “I needed to step up and make some shots. We don’t have Carleigh (Perry) now, so everyone has to do more.”

Gamewell was in there at the start and the finish. In between, Gadson did an awful lot, scoring 20 points.

“At halftime, I just made up my mind that we weren’t going to lose on Senior Night,” Gadson said. “West is a very tall team and we’re not tall. We needed to play with more effort, and we brought better effort in the second half. We boxed out better. We boxed out harder.”

Anderson signee Gadson took it to the rim often in the second half.  She drew contact and whistles. West got in foul trouble. Arnott, a huge factor in the first half, had to sit down with four fouls at a critical juncture in the game.

At the end of the third quarter, Gadson snatched a defensive board, went coast to coast, and drew another foul. Her free throw put Carson on top, 46-45.

Blabon made a 3-pointer for a 48-all tie early in the fourth quarter, but the 7-0 Carson run that answered that 3-pointer ultimately made the difference.

Gadson had struggled mightily at the foul line earlier in the game, but at crunch time she started making them all. She put in two free throws for a 50-48 Carson lead. Then Taylor Conrad got a layup, her only two of the game, but a huge bucket. Then Ellie Wilhelm nailed a 3-pointer from the left corner, the crowd went wild, and the Cougars led 55-48.

Carson wouldn’t give up the lead again, although West got back to 55-54 on back-to-back 3-pointers by Sobataka.

“We played really hard,” West coach Ashley Poole said. “Sometimes the scoreboard says you lost, but this was still a performance I was proud of. We stayed together and kept fighting. A bounce here or there and we win the game.”

Like Conrad, Lani Isley only made one basket, but it couldn’t have come at a better time for the Cougars. She scored inside to put Carson up 57-54 with 1:50 remaining.

Connolly was fouled on a 3-point attempt when Colbie Perry tried for a block, but Connolly was only able to make one free throw. Carson still led by two.

Cooper made a free throw for a 58-55 lead, and when Blabon missed on a 3-point try from the top, Isley came down with the game’s biggest rebound with 30 second left.

Then a breakaway bucket by Gadson and two free throws by Wilhelm put the game away for the Cougars.

Wilson, who had 15 points at the break, got her only points of the second half in the final seconds.

Carson solidified its hold on one of the top playoff seeds in the 3A West bracket.

West Rowan turned its thoughts to Statesville’s visit on Friday. West will be in the playoffs. Friday’s game will affect West’s seed.

West lost for the eighth straight time to Carson, but the Falcons left this one feeling optimistic about the days ahead. They’ve pulled together some in recent weeks. They played with some fire.

“Carson is a really good-shooting team and we had a few off moments that hurt us,” Arnott said. “But we know we played hard and we played good team ball. Coach Poole told us she was sad that we lost, but she felt good about the way we competed.”