Guy, No. 4 Virginia rally past No. 8 North Carolina 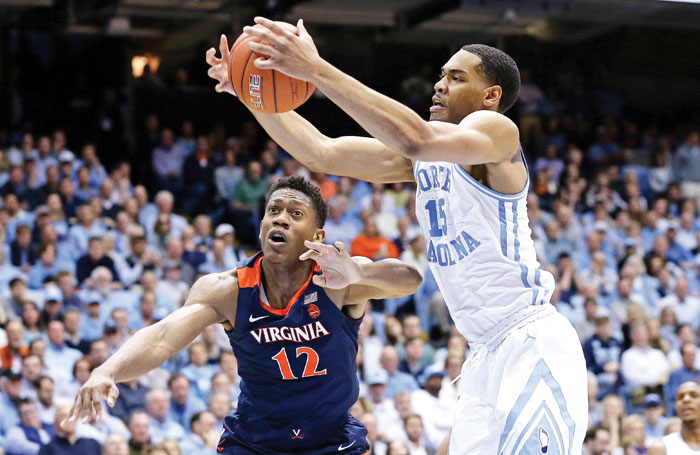 CHAPEL HILL (AP) — Virginia’s halftime lead was gone. North Carolina was pushing further ahead. And the Cavaliers were committing so many turnovers that coach Tony Bennett’s frustration bubbled over in the huddle.

Yet Kyle Guy, Ty Jerome and the rest of the fourth-ranked Cavaliers handled everything — dwindling clock, angry coach, powerful opponent and hostile crowd — with veteran poise.

Guy’s back-to-back 3-pointers in the final two minutes helped the Cavaliers beat the eighth-ranked Tar Heels 69-61 on Monday night, and Virginia remained near the top of the Atlantic Coast Conference standings after a weekend loss to No. 2 Duke.

Guy and De’Andre Hunter each scored 20 points for the Cavaliers (21-2, 9-2), who had less than 48 hours to regroup from the loss to the Blue Devils before visiting a UNC team that hadn’t lost in nearly a month.

“Our guys knew what they had to do,” Bennett said. “They responded. It wasn’t perfect. I told them, ‘This isn’t about winning or losing.’ I said, ‘This is an important game to get back to what we need to do.’”

The Cavs certainly looked like themselves: efficient on both ends of the floor. The offense hummed along by shooting 53 percent, including 11 of 20 on 3-pointers, and Virginia didn’t turn it over in the final 12 minutes.

The defense, aside from surrendering one fearsome second-half flurry, made the Tar Heels (19-5, 9-2) work for just about everything while keeping them out of transition. After allowing Duke to shoot 58 percent and make 13 of 21 3-pointers Saturday, Virginia held UNC to 35-percent shooting and just 9 of 30 (30 percent) from 3-point range.

It all helped Virginia rally from seven down in the final eight minutes and avoid its first losing streak of any kind in two years.

“There’s no excuses,” said Jerome, who had 15 points and 11 assists. “I told the team before the game, ‘I don’t care if we played Duke Saturday, I don’t care if we’re on the road today.’ Every game we come out and we expect to win, no matter where we are and who we’re playing against.”

Coby White scored 17 points to lead the Tar Heels, who were off to their best start in league play under 16th-year coach Roy Williams. North Carolina managed a 17-3 second-half run to turn an eight-point deficit into a 49-43 lead, which ultimately reached 53-46 near the 9-minute mark.

But UNC, which has one of the nation’s best offenses, missed 16 of 20 shots to close the game as Virginia’s defense tightened.

Virginia: The Cavaliers’ home loss to the Blue Devils on Saturday gave them more league losses than all of last season, when they went 20-1 against ACC teams to sweep the regular-season and tournament titles. And Virginia hadn’t lost consecutive games since dropping four straight in February 2017. Yet as they always seem to do, the Cavaliers stuck with their foundation: an unhurried offensive pace, stubborn defense and smart play.

“They didn’t do anything differently,” UNC’s Cameron Johnson said. “They kept playing the way they play.”

UNC: The Tar Heels had Michael Jordan in the house for this game and plenty of momentum with seven straight wins. But after managing to speed up Virginia in the second half to get out in transition, the Tar Heels sputtered down the stretch when they had a chance to seize control.

Guy’s shots deflated the Tar Heels and their crowd. First, he knocked one down from the right corner at the 1:55 mark for a 64-59 lead. Then he answered a UNC stickback by hitting another 3 while taking a whistle-drawing bump from Kenny Williams to make it 67-61 with 1:10 left. Jerome assisted on both scores.

“It means the world to me when someone like Ty has more confidence in me than sometimes I do,” Guy said. “That helps a lot.”

UNC had to go much of the way without key freshman reserve Nassir Little, who injured his right ankle with 12:06 left in the first half and didn’t return. Johnson also missed about four minutes late after rolling his left ankle.