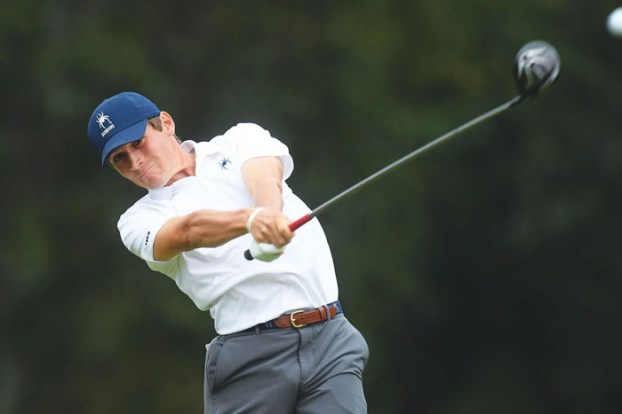 Richmond athletics photo ... University of Richmond golfer Michael Childress tees off. Childress, a freshman from Salisbury, had his best collegiate finish (13th place) at the Mobile Intercollegiate, in Mobile, Ala., Monday and Tuesday. Childress carded rounds of 72 and 69.

MOBILE, Ala. — Richmond’s Spiders finished tied for seventh in the 15-team field at the Mobile Intercollegiate, after officials ruled that rain had made the course at Magnolia Grove Country Club unplayable 30 minutes into Tuesday’s final round.

Richmond finished the event with a two-round total of 579 (+3), good enough for a four-way tie for seventh, alongside Louisiana, Illinois State, and Oral Roberts.

Freshman Michael Childress and junior Zack Justice finished tied for 13th in the 80-person field, after carding identical scores of 3-under par 141 (72-69) in two rounds on Monday.

The 13th-place finish was the best result of the season for Childress, a freshman from Salisbury (Cannon School).

It was the second time the Spiders have had an event shortened by weather this season.

Richmond’s season-opening Janney Invitational in Richmond was cancelled due to severe wind and rain in September.

Richmond will return to action next month when it competes at the Mission Inn Spring Spectacular in Howley-in-the-Hills, Fla., March 15-17.