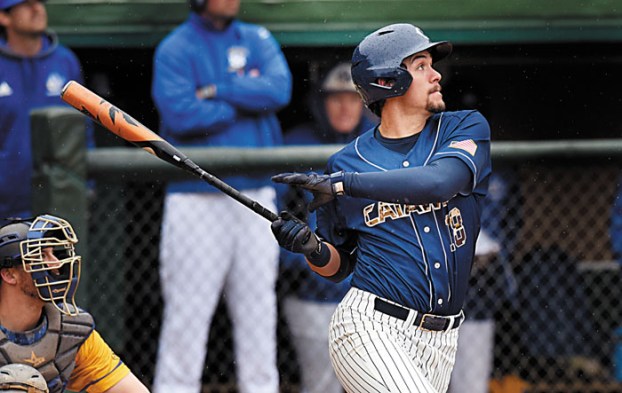 Shepherd stepped to the plate eight times in a one-sided doubleheader with the visiting Lions. He accounted for a grand slam, two doubles, two singles, two walks — and one amazing, line-drive out — as Catawba romped 15-0 and 11-1.  Shepherd stared out at left field in disbelief for a few seconds after Mangum’s catch. So did everyone else. It was remarkable.

“There are days at Newman Park where you feel like there are going to be 20 home runs hit,” Shepherd said. “But this was one of those cold, rainy days where it wasn’t easy to hit. I knew I’d hit that ball well. He made a really nice catch.”

Shepherd, a feared slugger in his days with the Homeschool Stallions and the Rowan County American Legion team, has been an integral part of Catawba’s pitching staff for a while, but this is the first season the powerful, lefty-swinging junior has been a regular in the batting order. Shepherd is a smooth first baseman, but Catawba had 2018 South Atlantic Conference and Southeast Region Player of the Year Chance Bowden to man that position in recent seasons.

“I did get some chances as the DH, but I usually struggled,” Shepherd said. “I’m not saying I’ve found a groove now, but I am enjoying being in the lineup with a great group of guys around me.”

Sophomore second baseman Joe Butts didn’t hit any out of the yard, but he was almost as devastating as Shepherd. He went 5-for-9 with five runs scored and five RBIs. Every time you looked up, Butts was whipping a liner into right field — and then creating mayhem on the base paths with his wheels.

“We’ve got a really athletic infield,” said Catawba hurler Riley Myers, who won the first game. “Those guys are making great defensive plays, and then they’re coming in and knocking the ball all over the park. As a pitcher, it’s pretty fun to watch.”

It was scoreless in top of the second inning and Mars Hill had runners at second and third with no outs against Myers.

Myers really needed a strikeout — and got it. Then he got another strikeout. After a ground ball to third baseman Jackson Raper, it was still 0-0, and a relieved Myers was back in the dugout.

“Getting of that inning with no runs was big,” Myers said. “They were starting to get a little rowdy. That quieted things down.”

It also provided momentum. Catawba scored four runs in the bottom of the second to take charge. Raper’s double got that inning started.

Catawba iced it with a six-run fourth that included Shepherd’s slam on a 2-and-1 pitch. He mashed it high over the wall in left-center.

“Guys have to do their job and get on base for anyone to hit a grand slam,” Shepherd said. “My teammates put me in a good position. I was just trying to get one in the air to get that runner home from third base. Fortunately,  I put a pretty good swing one one, and it went out.”

“Our good start has been exciting, but I don’t know that excited is really the right word for how we feel,” Myers said. “We expected this to happen. Still, it’s nice to see it actually happening.”

Matt Honeycutt, the former South Rowan standout who had a monster season for Mars Hill as a junior, collected two of Mars Hill’s five hits.

In the second game, Catawba took command right away with a grind-it-out, five-run first.

Guys were patient. Jeremy Simpson, Heath Mitchem and Shepherd worked full counts before drawing walks to fill the bases with two men out.

Butt was next, and it was a perfect spot for impatience. The first pitch was down the middle. Butts didn’t miss it. He rifled it to right-center. Catawba led 2-0.

Then Butts stole second, so freshman Robbie Cowie’s hot grounder past a diving third baseman plated two runs for a 4-0 lead. After a two-out error, it was 5-0.

In the third, Butts stole third base and scored on a wild pitch. Jacob Nester’s RBI single pushed the lead to 7-0.

Raper’s two-run single was the key swing in a four-run fourth that made it 11-0.

Mars Hill finally managed a run against Catawba’s towering freshman starter Bryson Linkous after he walked the first two batters in the fifth, but the 6-foot-8 Linkous was hard to hit. He notched six strikeouts and his first college victory. Trent Montgomery got the last out in the fifth. Closer Peyton Williams fanned five of the seven hitters he faced to end the seven-inning contest and send frozen fans home.

Catawba improved to 8-1. The Indians were 1-8 at this point a year ago. Sunday’s games don’t count in the SAC standings, but they still had relevance.

“Winning so many of these early games is really important,” Myers said. “We don’t want early losses hurting us as far as making the regional.”

Catawba’s next action is a weekend series at Newman Park against Shippensburg. Friday’s game is at 3 p.m.