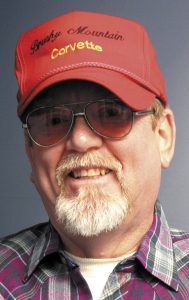 On the afternoon of Sunday, Feb. 2, while visiting the Salisbury VA Medical Center, I met a young couple from down around the little town of China Grove, in south Rowan.

Notice I didn’t call it southern Rowan? It’s not called northern Rowan, eastern Rowan or western Rowan. So, why all of a sudden are the politicians calling it “southern” Rowan?

Anywho, I talked with the couple about various things but nary a word about building walls or tearing down schools.

When we parted ways, the nice, young couple gave me their church bulletin to take home and study. I was impressed with the couple but more so with the bulletin.

There were several things in it that got my attention and done my heart good. The items lifted my spirits and made me realize that people still care.

I would love to share them with you at this point in time. The first one was for a quart of vegetable beef soup for $8 on “Souper Bowl Sunday,” with proceeds going to Rowan Helping Ministries. Just the facts and nothing to figure out. No funny business.

The second one was for a meal that was scheduled on Thursday. It listed the menu and the price. Again, no funny business.

The third one was for another fundraiser meal happening today, with a baked potato and salad bar. It stated, “Suggested meal price is $7 but any monetary gifts are greatly appreciated.” See how easy and simple that was?

The last one was for the South Rowan High School Golf Spaghetti Dinner on Feb. 21. Very simply, this one stated, “Donations will be accepted.”

The First United Methodist Church in China Grove has got its dictionary in order and totally knows the difference between a cost ($7 or $8) and a donation, which is also a gift without a price.

When are the rest of the “fundraisers” going to pull their dictionaries out? It ain’t that hard.

That question leads to this: After reading in the Post’s ‘Time Out” section on Jan. 24  about fundraisers “In lieu of admission price, donations of $10 for adults and $5 for children over 3 are requested,” I thought of this song by Porter Wagner and Dolly Parton, “Would You Run That By Me One More Time.”

So I read it again. Then, I called a very educated social worker. After reading it to him, I asked him if he could explain it to me.

Social worker: “Are you planning on attending?”

Social worker:  “Well, why are you worried about it, then?”

I told him I wasn’t worried about it, I was confused about it.

Social worker: “I think you need to get a life.”

I thought he said a “wife.” So, I told him I didn’t think I needed one and since he’s had two of them — that equals out to one apiece.

I said, “I think you need to get an unlisted phone number.”

He hung up on me.

We will be having our first annual shindig the second Tuesday of next week. The date will be Feb. 31, because next year is a leap year. If you remember, last year’s “dig” fell on Feb. 30.

This year, in lieu of supper, we will be doing exercise. We are requesting the adults to eat two pieces of cake for their exercise and all the children over age 3, just eat one piece.

The moral of this story was best summed up by the Statler Brothers when they sang this song, “You Can’t Have Your Kate and Edith, Too.”

From “the Wood Shed.”

I have a renewed faith in our community because of the business community rallying around our veterans to provide the... read more