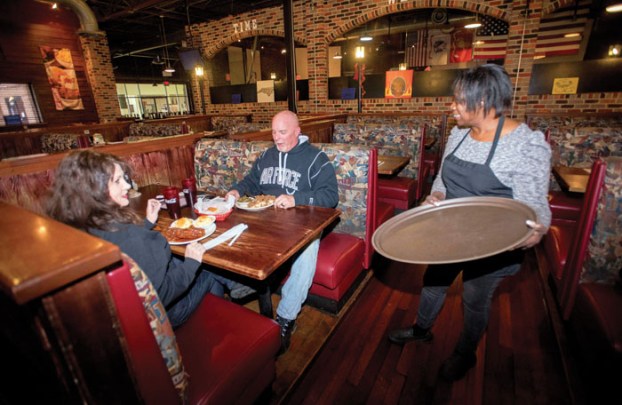 As if it never closed, Thelma’s Down Home Cooking reopens

SALISBURY — As if she never closed, Thelma Luckey reopened her restaurant in West End Plaza on Sunday to a crowd of patrons.

Sunday is usually the busiest day for Thelma’s Down Home Cooking, located near the intersection of Statesville and Jake Alexander boulevards, but this one wasn’t a typical after-church rush. Ten days earlier, the N.C. Department of Revenue closed Thelma’s restaurant for nonpayment of taxes, with no-trespassing signs posted at the entrance. The signs said the restaurant had been seized.

News of the closure spread quickly. Words of encouragement from patrons, friends and family flowed in, too.

It was a good feeling to have so many people concerned about the restaurant, she said.

She was able to re-enter the restaurant Friday, called her employees back to work Saturday and reopened at noon Sunday.

Luckey spoke to the Post in the lobby of her restaurant shortly after the opening and smiled as she watched a line of patrons stream in.

Luckey said taxes that were due were not paid in full on time, but she worked out an agreement with the Department of Revenue that allowed the restaurant to get back in business quickly.

She said being a small business owner isn’t easy.

“You can’t just open your doors. There’s a lot of red tape behind that,” Luckey said. “I’ve had to deal with that, but it’s all going to be OK.”

The closure occurred just days before a popular, weekly veterans coffee gathering at the Frontier Coffee Shop within the restaurant. The program is therapy for the veterans, Luckey said. Over the years, scores of veterans have walked through the doors of Thelma’s Down Home Cooking for the weekly coffee. Politicians campaigning for federal office have made Thelma’s a stopping point. Staff from Salisbury VA Medical Center have attended the coffee, too.

Luckey herself is a veteran. She served more than 20 years in the Army Reserve. As a result, she says, being able to host veterans for coffee weekly is particularly meaningful. Luckey said she told Tom Harrell, who helps organize the weekly event, to plan on returning to K&W Cafeteria — where it moved following Thelma’s closure —  on Tuesday but that she would like the veterans coffee to return to her restaurant.

“If you take the veterans away from me, you’ve taken my heart,” Luckey said. “I’m very passionate about that.”

She says her restaurant is the realization of a dream. Luckey opened Thelma’s nine years ago as a booth in the former Salisbury Mall. Now in a storefront at the exterior of the building, Thelma’s will mark its 10th anniversary in August.

“I’ve always had a desire and interest in cooking since I was a young girl,” she said. “I’m grateful to be back.”

If you’re looking for Luckey, she says you’ll find her in the kitchen, cooking yams, collard greens, and mac and cheese.