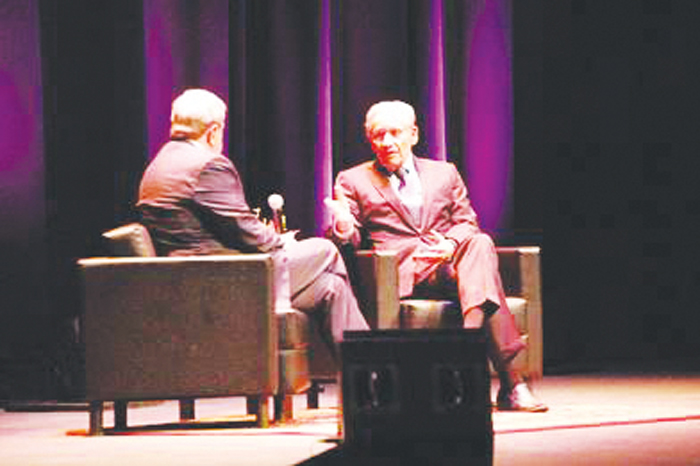 DURHAM — In the early 1970s, Bob Woodward emerged as one of the nation’s most prominent journalists. With his partner Carl Bernstein, he broke the story of Watergate, winning the Pulitzer Prize in 1973.

Since then, Woodward has continued writing about presidents, from Richard Nixon to Donald Trump. He has been called “truth’s gold standard” and has the uncanny ability to get sources to spill their guts.

Woodward has written 19 nonfiction bestsellers including 13 that reached No. 1, more than any other contemporary author.

All these years later, Woodward is still trying to uncover the secrets of government. His latest book is “Fear: Trump in the White House,” and he appeared at Durham Performing Arts Center on Feb. 2 to talk about it. He followed with an afternoon appearance Feb. 3 in Charlotte.

At both venues, Woodward talked with local journalists — WRAL-TV’s David Crabtree in Durham and WFAE-TV’s Mike Collins in Charlotte.

“People want to know what’s going on,” Woodward said in Durham. “The problem with government is that it’s a secret government. I have the luxury of time to dig into things and get documents.”

Woodward still is an associate editor at The Washington Post.

He says his new book is fair to Trump, “but we have a governing crisis in this country.”

“Trump is not normal. He didn’t run to be normal,” Woodward said.

Trump is working to dismantle some of the pillars of government, including trade agreements, military alliances, and top-secret intelligence partnerships, he contended.

“You can’t burn down the house if you have to live in it,” he said.

Watergate still casts a long shadow over Woodward’s career, and the Durham audience seemed eager to hear about his old-school, shoe-leather reporting. While reporting on Watergate, he went to people’s homes to interview them at odd hours, he said, a practice he continues today. When he knocked on the door of a four-star general, the general asked him, “Are you still doing this?”

Woodward uses the strategy of letting “silence suck out the truth,” and it has worked.

“I get a good number of no’s,” he said during the question-and-answer portion of the evening. “But it’s the yesses that count. People like to talk.”

Crabtree asked Woodward what he’d do if he were a reporter on a daily deadline. Woodward recommended a “valium gargle.”

“I’d calm down, focus and work hard,” Woodward said, adding that reporters must now cover a president who often tweets at 3 a.m.

“There’s no warning, no system, no process,” he said. “You can’t do these things on the fly, and then the headline becomes the story. Trump generally makes himself pretty clear. His tweets are not ambiguous.”

Crabtree noted that the tapes from the Nixon White House were the turning point of Watergate.

“Do you see any type of tipping point now?” Crabtree asked.

Woodward said it would be easier to describe the creation of the universe. But with the Nixon tapes, he said, there was clearly obstruction of justice.

“We have not seen that,” he said. “The evidence should be crystal clear.”

“The thing we hate the most in this political culture is to be patient.”

Turning to the 2016 election, Woodward said that Steve Bannon, Trump’s chief strategist, told the candidate that polls were showing two-thirds of the country thought America was on the wrong track and three-fourths thought America was in decline. Trump’s message of “make America great again” had resonance, and Trump became the voice of many Americans’ dissatisfaction.

“People had the feeling of, ‘He’s gonna look out for me,’” Woodward said. “The tragedy for Trump voters is if you look at what he’s doing for them, it’s not much. Tariffs do not work, and workers are paying the price.”

Turning to the world scene, Woodward said the president’s first job is to prevent another world war.

“The catastrophe of war is understood by not many people. It is something we need to make sure our leaders understand.”

Crabtree asked Woodward if he thinks Trump is listening to his advisers.

“Trump won the presidency without ever having standing for any other election,” he said. “He was elected, and he knows how he did it.”

A common theme of the presidency, Woodward has discovered while covering nine presidents, is that presidents get isolated — what he called “the treacherous curtain of deference.”

Presidents, he said, tend to come to realize a feeling of destiny in the nation’s highest office.

Crabtree told Woodward he had set a high standard for his profession, and Woodward talked about how important it is to get the facts right. He said he once felt sure there had been corruption in President Gerald Ford’s full pardon of Nixon yet realized years later there was none. Ford told him that he didn’t want the Watergate scandal to continue once Nixon left office and became a private citizen. Woodward said Ford was later vindicated and received the Kennedy family’s Profiles in Courage Award.

“What I was sure was corrupt turned out to be courage,” he said.

Dozens of people patiently waited to ask questions at two microphones in the audience. Woodward answered a few questions but had a hard time keeping his responses brief.

He said he does not like the president’s attacks on the media.

“Deal with facts and be as calm as possible,” he said of his colleagues.

Woodward said Trump has adopted the Nixon strategy of making the press the issue.

Another question addressed the effects of the decline of the newspaper industry on democracy. Woodward said journalists must keep their noses down and keep moving forward.

“You can sit around and wring your hands, but we need to work through that painful road of introspection. We have to make the product better. We can make journalism better. It’s just gonna be a long road. There are some magnificent reporters out there doing meaningful work.”