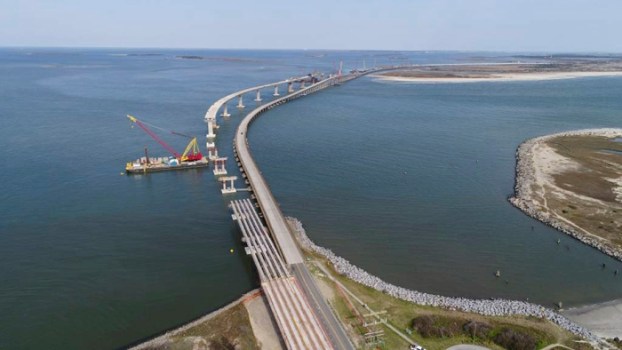 This April 2018 photo provided by the North Carolina Department of Transportation shows progress on a new Bonner Bridge that will span the Oregon Inlet on North Carolina's Outer Banks.

New Outer Banks bridge could get a new name as well

Basnight served a record 18 years as the leader of the state Senate, representing Dare County, where the bridge is located.

The Dare County commissioners had voted 3-2 last week to recommend that the bridge be named for Basnight. DOT policy requires a unanimous vote from a local government for renaming bridges, roads and ferries, but the five-person committee unanimously recommended the change anyway, Hass said.

The state Transportation Board will vote March 7 on whether to rename the bridge.

The new bridge is supposed to open in mid-February, and a community day to celebrate the opening was scheduled Saturday. That means the bridge is likely to be nameless when it opens.

However, a formal ceremony with Gov. Roy Cooper is planned for April and it should have a name by then, Hass said.

The Dare County commissioners asked residents to vote online as to which name they support, and Basnight got 309 votes with Bonner receiving 266.

Herbert Bonner, a U.S. senator from 1940 to 1965, was instrumental in supporting Cape Hatteras National Seashore.

He’s also known for signing the Southern Manifesto, a 1956 document opposing school desegregation that gave rise to defiance in the South as the region ignored the U.S. Supreme Court decision in Brown v. Board of Education, said Joe Crespino. He’s a history professor at Emory University who specializes in 20th-century United States history and the American South since Reconstruction.

The manifesto “galvanized the resistance to Brown and made it a legitimate position to resist it and to defy it,” Crespino said in a phone interview.

Most Southern U.S. senators and representatives signed the manifesto, which said the Brown decision “is creating chaos and confusion in the states principally affected. It is destroying the amicable relations between the white and Negro races that have been created through 90 years of patient effort by the good people of both races. It has planted hatred and suspicion where there has been heretofore friendship and understanding.”

Those who support renaming the bridge in honor of Basnight don’t seem to have discussed Bonner’s signing of the manifesto; rather, they signaled they support renaming it after Basnight because of all the work he did for the Outer Banks when he was a state senator.

Bob Woodard, chairman of the Dare County Commission, said he researched Bonner but was unaware of the manifesto.

The bridge spans Oregon Inlet, connecting N.C. 12 and Hatteras Island eventually to the mainland. It’s the only access to the island other than ferries.

The parts of the original bridge that are demolished will be added to offshore reef sites while about 1,000 feet at the south end will stay in place and be open for pedestrians. That part would keep the Bonner Bridge name, Hass said.