Screen time: ‘I don’t think we’re as busy as we say we are’ 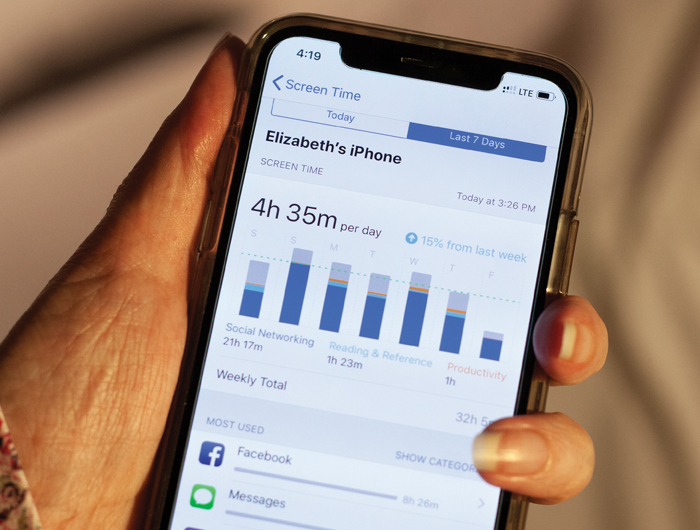 Newer iPhones can show the amount of screen time spent and which apps were used the most. Photo by Andy Mooney, Salisbury Post. 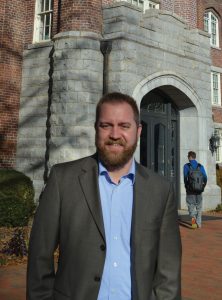 My phone updated not long ago, and I saw something under Settings I’d never seen before: Screen Time.
Uh-oh.
I clicked on it, and it showed me the amount of time I’ve been spending each week on my smartphone.
Uh-oh.
In the last seven days, I’ve been on my phone for 16 hours 11 minutes. That breaks down into social networking — facebook and messages (10 hours 8 minutes), productivity — email (2 hours 9 minutes), reading and reference (1 hour 2 minutes).
If I want to break it down farther — and I do — I spent 39 minutes a day or 4 hours 38 minutes a week texting. Now, I could rationalize it and say a lot of it is work-related, and it is.
But then there’s the 5 hours and 17 minutes a week on facebook, or 45 minutes a day. What the heck? People complain they’re so busy these days — and I’m among them — yet here I am on facebook 45 minutes a day.
Uh-oh.

I’m clearly not alone on my phone, so to speak.
Go into any restaurant. You’ll see couples dining together — each on a phone. You’ll see whole families eating together — yep, same thing. Just about anywhere you go in a public space, folks are on their phones.
As adults, we’ve spent years controlling our children’s screen time. So what must we do to control ours?

Dr. Chad Betters is new this semester to the School of Health Sciences & Human Performance at Catawba College. His background is in counseling and he’s helping Dr. Jim Hand develop the new program at Catawba.
Betters says that when parents bring their children in for counseling about screen time use, “the kids are really quick to share, ‘Mom and Dad do the same thing.’
“This is not a kids’ issue. This is an American issue.”
Betters says he hears wives say, “This phone is the mistress.”
Betters says he hears husbands say, “I can’t compete with facebook.”
“The irony is that social media appears to be hindering our ability to be social,” he says. “It creates a false sense of community. We stay connected without being connected.”
Betters says the National Institutes of Health estimates that the average American spends 11 hours a day viewing a screen — certainly, that’s understandable given the vast majority of jobs now have a computer. But then those same Americans log another several hours on their smartphones.
“The reality is that a lot of that is not productive,” Betters says.
Of course, technology is not inherently wrong, he says. But it does feed into the “perceived busyness we have.”
“Everyone says, ‘We’re so busy,’” Betters says. “I don’t think we’re as busy as we say we are.”
A couple might say, “We don’t have time to communicate,” Betters says, “yet we sit in our chairs in the living room and we’re scrolling.”
Or we might say, “We don’t have time to exercise,” Betters notes, “but we’re averaging three to four hours in front of a screen. We are not using our time effectively because we spend an inordinate amount of time on screens.”

As a systems engineer with Microsoft in Seattle, Patrick King spends a lot of time in front of a screen. He’s also an avid gamer.
But, he says, “I also try to spend time doing other things.”
He enjoys working out, and spending time exploring his new hometown, he says, and he no longer has to carry his phone around to use the maps function. But he says about 90 percent of the folks he passes on the street — in this high-tech town — are on their phones.
King remembers a family dinner during which his dad, David, got onto him — and his mom, Susan — about being on their phones.
King notes, “I start getting in trouble when I use my phone for entertainment purposes. When I talk with others, it’s rude if you use your phone.”
King kept this in mind at Christmastime, when he spent time with both sets of grandparents. “I kept my phone in my pocket. I really wanted to value my time with them.”
King says he still likes to play games, but can’t afford to stay up late doing so any more. He strives for a work-life balance, he says.

His mom never missed the opportunity to check her phone at a traffic light.
But after the family dinner episode, Susan King now meditates over scriptures she keeps in the car.
“I keep my phone face down during the day now,” she says. “One day I forgot my phone, and I realized it was taking a lot of time. It was taking control of me and I didn’t like it.”
At family gatherings now, she says, she leaves her phone in another room. “You don’t realize how involved you are. It’s surprising how those minutes add up.”
Her husband, an optometrist, has never been into the social aspect of technology, she says. “He’s been a good influence on the rest of us. It’s just never been a pull for him. But I definitely set a limit now on my phone time. It’s all about balance.”

That’s true, says Mary Willis Page, a local psychologist with 30 years’ experience in counseling and psychological evaluation.
When she asks children what they like to do in their spare time, 99 percent of the time the answer, she says, is playing video games.
Page says she observes people on their phones all the time: in her waiting room, at restaurants, just about everywhere.
“There’s very little social interaction,” she says. “I think that’s dangerous, because adults are modeling this behavior for their children.”
Just because you’re texting with someone doesn’t mean you get the whole picture, she says. “You don’t get inflection, or body language or other social nuances. We miss that, and there’s room for misinterpretation.”
Page admits her phone is by her bedside. It’s her alarm clock in the morning, and the first place she turns for the news of the day. “But becomes a problem when it keeps us from doing what we want to do or need to do.”
At night, you should not use your phone just before you go to sleep, she says. First of all, the bright light does not promote good sleep hygiene, and secondly, you can easily slip into a rabbit hole, taking up precious minutes that should be used sleeping.
“Be cognizant and recognize when you use your phone,” Page says. “There should be no phones at the table, and try a screen-free Sunday with yourself or your family. Think about the question, ‘Is this the behavior I want to model for my children?’ Choose blocks of time to use your devices. There is a generation that’s known nothing else, but our generation has quickly adapted, too.
“We need to control it, rather than it controlling us.”

Betters concurs. Limiting screen time is a huge challenge, he says, because screens are now so portable.
“It’s an answer to all our needs,” he says. “Technology has always advanced the idea of making our lives easier and streamlining things. But now, with the more technology we have in front of us, the busier we are.”
Betters suggests taking an honest look at how you are using technology. The Screen Time feature does objectively measure the use — most people typically underestimate screen time, he says.
“With behavioral changes, you have to develop new habits,” he says. “Certain windows of time can be tech-free. We don’t want to demonize technology, but we need to be responsible.”
Additionally, he says, software can modulate the technology on all apps and equipment — after a certain time at night, the wi-fi can be turned off, for example, he says.
“As parents, as adults, we should apply these things to ourselves, too,” he adds. “If we are aware that the overuse of technology is a negative thing, then why would we assume it doesn’t apply to us?”