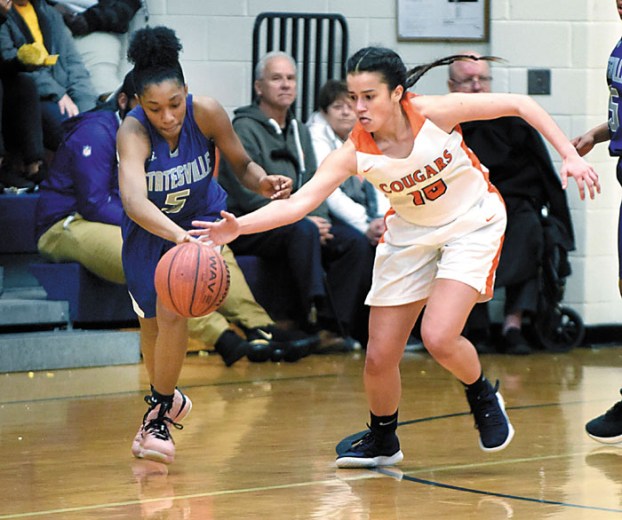 Carson's Taylor Conard (15) goes for a steal from Shania Bailey-Scott (5). ... Photo by Wayne Hinshaw, for the Salisbury Post

Prep basketball: Carson girls win a big one over Greyhounds 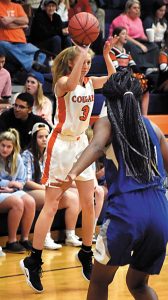 CHINA GROVE — Normally the last thing on the mind of Carson point guard Lani Isley is scoring, but this game was a little different.

Carson was taking on Statesville, the only team that’s beaten the Cougars this season, and Isley recognized how important it was to start quickly.

Carson got buried in the first quarter in the game at Statesville. But not this time. Without hesitation, Isley took it to the rim for the first two of the game. After the Greyhounds answered, she took it to the hole again for a 4-2 lead.

Isley, who scored 11, energized the Cougars. By midway through the first quarter, they were ahead to stay. Carson controlled the game and won 56-40.

“Not having Carleigh Perry (knee), we all have to look for new opportunities to score,” Isley said. “I had some chances to drive.”

Isley got the Cougars started. Colbie Perry (18 points) and McKenzie Gadson (17 points, 11 rebounds) took it from there. They were awesome forces all night.

It’s easy to label Perry as a shooter, but this may have been the best overall game of her life. She defended, she rebounded, she made tough 2s as well as long-distance 3s.

Gadson was everywhere, soaring above the crowd for defensive rebounds, knocking down 10 of 12 free throws, and owning the lane in the middle of Carson’s  2-3 zone. She may as well have been wearing a “No Trespassing” sign around her neck. Greyhounds who did venture into the lane got swatted by her long arms.

“It’s good to have some revenge on them,” Gadson said. “Our defense was really good tonight. We were talking, communicating. To beat Statesville, you have to keep them out of the lane. You have to make them shoot from outside, and we were able to do that.”

The other thing you have do to beat the Greyhounds (16-5, 5-3) is handle the defensive pressure when Statesville turns up the heat. With Isley controlling the ball, Carson has fewer worries than most teams.

“Statesville is really athletic, really tough and they can bring a ton of pressure,” Carson coach Brooke Stouder said. “But I thought we did a  good job of keeping our composure and handling things. In the second half, especially, we played very well.”

It was a huge victory for Carson, which is almost certain to take an outright North Piedmont Conference title. The Cougars (21-1, 7-1) own a two-game lead over Statesville, West Rowan and North Iredell with two games left to play. Carson hosts West Rowan Tuesday and goes to South Iredell on Friday to finish the regular season.

Gadson rarely shoots 3s, but she made one early and had 11 points by halftime. Carson was up 26-20.

“We did a lot of good things, but I thought we got killed on the boards in the first half,” Stouder said. “We’d make them take a tough shot, they’d miss, but then they’d get it back. In the second half, we got the rebounds to close out those possessions. They only had three offensive rebounds in the second half.”

It was 31-25 in the third quarter when Maci Cooper hit a 3-pointer for Carson to provide some breathing room. Then Ellie Wilhelm chipped in with a hard-driving 3-point play, and the Cougars led, 40-31, after three quarters.

Perry was 4-for-5 on 3-pointers. Her fourth 3-ball with four minutes left put Carson up by a dozen. Moments later, she came down with a contested rebound and nailed the one-and-one free throws that put the Cougars up 14.

“I’ve been struggling some lately, but I tried to be more confident on my shots tonight,” Perry said. “It was good to make some shots, but defense was still our biggest thing tonight. That’s where we won this game.”

Statesville pressed fullcourt in the final minutes, but Carson showed no signs of wilting.

And Carson’s 2-3 zone frustrated the visitors from start to finish.

“We were really moving well in that 2-3,” Isley said. “We didn’t give up many easy baskets tonight. We made them work for everything.”

Carson’s 3-point total was lower than usual (6), but the Cougars made up for it by making 18 of 22 free throws.

“We’re not going to out-athlete or out-jump many people and we’re very undersized,” Stouder said. “But we played solid basketball tonight. I was pleased with how we played in such a big game.”