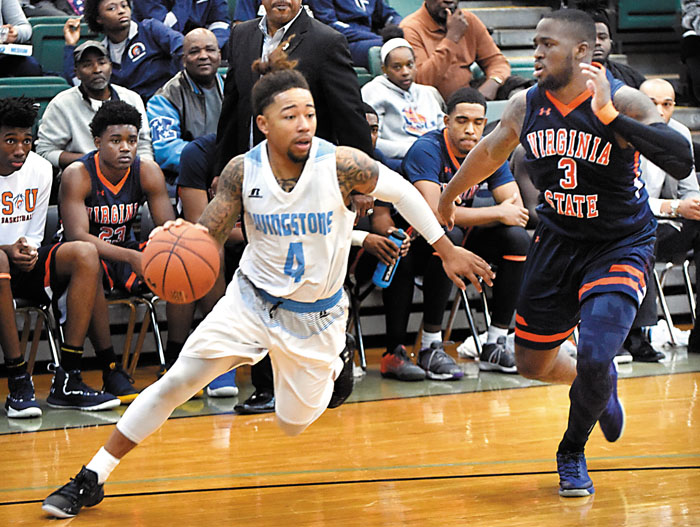 File photo by Wayne Hinshaw/for the Salisbury Post ... Roger Ray (4) helped Livingstone defeat Shaw on Saturday at New Trent Gym. He is shown above during an earlier game against Virginia State.

SALISBURY —Anyone waiting for Livingstone’s bubble to burst will have to wait a little longer.

It didn’t happen Saturday at New Trent Gym, where the Blue Bears avenged their worst men’s basketball defeat of the season with a 78-67 CIAA victory over Shaw.

“It was a great win because there was a lot on the line,” high-scorer Roger Ray said, moments after Livingstone (15-7, 8-4) won for the eighth time in its last nine games and improved to 6-1 in the league’s Southern Division standings. “We’ve had a week off and all the mental and physical preparation is what did it. Coach ran us like crazy all week. Today, we really got after it.”

It wasn’t a pretty performance by LC, just pretty important. Livingstone — insulted by Shaw (11-12, 6-8) in a 35-point loss 12 days earlier — shot a pedestrian 40.7 percent from the field and stuck only three of 13 attempts from 3-point range.

“They beat us first so the tie-breaker goes to them,” said head coach James Stinson. “We wanted to change it up a little bit this time. We’re normally kind of up-tempo, but that’s their style. We tried to make them work for everything.”

Rebounding and defense proved decisive. The Blue Bears held a 49-27 edge on the boards (20 offensive rebounds) and limited Shaw to 20 field goals and 37 percent shooting. Shaw guard Amir Hinton — the nation’s premier Division II scorer with a 32.4 points-per-game average — shot 5-for-13 from the floor and netted a season-low 17 points. Frustrated with a number of calls, he was assessed two technicals and fouled out with 1:55 to play.

“They didn’t take Amir out of the game,” said Shaw coach Joel Hopkins. “Amir took himself out of the game. He’s got to be mentally stronger and play smarter basketball. Even if he has a target on his back, he’s still got to be more professional.”

Ray paced the Blue Bears with 23 points, including 17 in the second half. He shot 7-for-14 from the field and added five assists. Teammate Lydell Elmore posted a double-double (15 points, 11 rebounds), as did 6-foot-10 Kenny Grant (10 points, 12 rebounds), who missed six games earlier this winter with a thumb injury.

“Kenny Grant did a better job today,” Stinson said. “I think he’s coming around. He carved out space for himself. He rebounded in traffic. And he went and picked up loose basketballs.”

For more than 30 minutes, the teams engaged in a hard-fought duel. The score was tied eight different times before Livingstone forged a 53-50 lead on a layup by Damante McNeill with 10:28 to play, a call designed by assistant coach Tony Holliday, then used a 9-0 scoring spree to go up 68-57 when Ray buried a 16-foot jumper with 4:14 on the clock. Grant’s back-in layup — an authoritative, well-defended stick from the right block — signaled a turning point.

“We all stuck together and kept our heads,” Grant said. “I just played hard and tried to finish around the basket.”

Elmore, a 6-10 sophomore with a 7-5 wingspan and part of Livingstone’s towering front-court skyline, said the Blue Bears never did get comfortable with the lead.

“You never know when they’re going to go on a run,” he said. “And there was always another play to make. We knew we couldn’t get complacent.”

LC all-but-secured the outcome when Elmore scored on a wrap-around layup that provided a 10-point lead with 2:32 to go. The rambunctious matinee crowd erupted in the closing minutes when Hinton was whistled for his fifth personal, then got his second technical as he walked off the floor.

“He was frustrated,” Grant said. “And tired. Every time he drove, we had somebody on him.”

When it ended, Livingstone had steadied its perch atop the division standings with five games to play — but that didn’t soothe Ray’s outlook.

“We’re trying not to get too excited,” he said. “We’ve still got a lot of work to do. We’ve got an end result in mind and we’re not there yet.”

NOTES: Livingstone improved to 9-1 at home. It plays its next three on the road, beginning Wednesday night at Fayetteville State. … Shaw averaged 82.5 points-per-game before tipoff, tops in the CIAA. … Grant (6) and Elmore (5) combined for 11 offensive rebounds. … Junior forward Davon Dillard, an Oklahoma State transfer, had 13 points and nine rebounds for SU. … The victory was the 487th of Stinson’s coaching career.