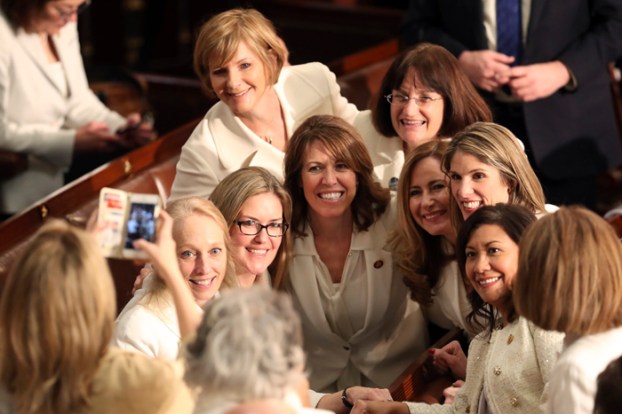 Women members of Congress pose for a photo ahead of President Donald Trump delivering his State of the Union address Tuesday. Andrew Harnik/Associated Press

Women finally achieved the right to vote when the 19th Amendment became law in 1920. Here’s a good way to celebrate its centennial: Ratify the Equal Rights Amendment — or ERA — that completes the job of banning all forms of gender-based discrimination, not just in the voting booth.

The entire amendment contains only 24 words: “Equality of rights under the law shall not be denied or abridged by the United States or by any state on account of sex.” As Sens. Lisa Murkowski, an Alaska Republican, and Ben Cardin, a Maryland Democrat, wrote in The Washington Post: “It’s a little less than a tweet, but it will make a positive difference in the lives of millions of women.”

Here’s why: Under current law, discrimination “on account of sex” is not subject to “strict scrutiny,” the most rigorous legal standard and the one applied to racial injustice. The ERA would change that, equalizing the tests that apply to both race and gender and making it much harder to justify biases aimed at women.

Legal experts agree that the ERA is needed to clarify the law, since there is still a lot of confusion and uncertainty about how federal courts should interpret claims of sex discrimination.

The ERA was first proposed in 1923, but it was not approved by Congress until 1972. Lawmakers mandated a seven-year period for ratification and later extended the deadline to 10 years, but fierce opposition from conservative women, led by activist Phyllis Schlafly, stalled the ratification effort. By 1982, only 35 states had approved the measure, three short of the 38 needed.

The amendment fell into deep hibernation until it was revived by a combination of powerful forces: the defeat of Hillary Clinton, the rise of Donald Trump and, most important, the growing prominence and potency of women in public life, who fueled the Women’s March and the #MeToo movement and ran for office in record numbers.

The new Congress includes 102 women in the House and 25 in the Senate — both historic highs. Nancy Pelosi, the first female speaker, has reclaimed that office. The congressional committee charged with ending the budget showdown is headed by Rep. Nita Lowey, chairwoman of the House Appropriations Committee. Three female senators have already entered the race for the Democratic presidential nomination — Kamala Harris, Kirsten Gillibrand and Elizabeth Warren — and others are likely to follow.

Two years ago, Nevada became the 36th state to ratify the ERA, and last year, Illinois became the 37th, leaving one state to go. Virginia came close last month, with the amendment passing the state senate, but it got blocked by four Republicans in an obscure subcommittee of the house.

“The only thing you’ve done is added fuel to the fire,” Delegate Jennifer Carroll Foy, the measure’s lead sponsor, told opponents after the defeat. “We will be back.”

They will be back, but obstacles remain. Opponents of the ERA have hauled out the old scare tactics and fear-mongering that helped quash the amendment more than 30 years ago, including the totally unfounded charge that it would lead to unlimited taxpayer-funded abortions.

Another problem is that the statutory limit for passing the amendment expired in 1982, but that’s not insurmountable. The Constitution makes no mention of time limits for amendments, and none was imposed until the 18th Amendment, mandating Prohibition, was advanced in 1917.

The deadline has already been extended once, and to guard against legal challenges, bipartisan bills have been introduced in both houses of Congress that would formally extend the deadline a second time.

This is the real question: Is the ERA needed today? Ironically, foes maintain it’s not essential because women have made so much progress without it, but that is a disingenuous argument that ignores the gender-based disparities that still exist, starting with unequal pay for equal work.

The unbalanced and unfair legal status of women could not be clearer. Supporters of the ERA point to the late Antonin Scalia, the most influential conservative jurist of his age, who said in a 2011 interview: “Certainly the Constitution does not require discrimination on the basis of sex. The only issue is whether it prohibits it. It doesn’t.”

Rep. Carolyn Maloney, a leading supporter of the ERA, agrees with Scalia. Since “our Constitution does not contain the word ‘women’ … it does not guarantee our equal rights,” she argues. “So we need to make it clear, that equal means equal. To do that we must spell it out in the Constitution. … Now is the time.”

… Industry to set up shop next to Summit shopping center. I think they need to stop turning everything into... read more