Where, oh where, should the Oakland Raiders play? 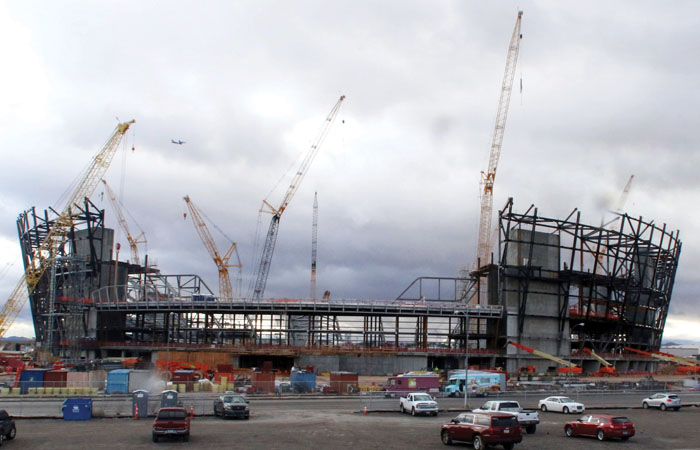 This Jan. 17, 2019, photo shows the construction site for the future Raiders stadium in Las Vegas. In 2018, 10 companies began efforts to leave Nevada's utility monopoly, NV Energy. Others are still under construction, such as the Raiders' Las Vegas stadium and the MSG Sphere Las Vegas music and entertainment venue. (Bizuayehu Tesfaye/Las Vegas Review-Journal via AP)

The Raiders thought they finally found a place to play next season, only to find out they’re not wanted in San Francisco.

Not by the mayor, and certainly not by the team that still calls itself the San Francisco 49ers — even while it plays its games in a stadium 40 miles away in the Silicon Valley. They’ve pretty much shut down any plans to play at Oracle Park, home of the baseball Giants.

Six months before the preseason begins, the Raiders are officially still homeless for 2019, locked in an angry dispute with Oakland politicians and searching for a welcome mat somewhere nearby. Even with a scheduled game in London, they still need a home field for seven other regular-season games and two exhibitions.

Not that anyone should feel sorry for Mark Davis and his nomadic team. They’ve got a nifty new place all lined up in Las Vegas, where the politicians are much more accommodating.

They’re building the team a new $1.8 billion stadium that will open in 2020 with a view of the glitzy Strip just in case the action on the field isn’t enough to keep fan attention. Taxpayers will be footing $750 million of that deal in what might be the biggest giveaway ever to a team owner.

Still, Las Vegas officials have to wonder about the competence of Davis and his brain trust, who have vowed not to play a final year in Oakland after being hit with a lawsuit for moving the team. They’ve been reduced to begging for a site for the lame-duck team while finishing touches are being put on the sparkling new facility in Sin City.

So what does Davis do? Where will the Raiders play?

Here’s a few suggestions, just in case nothing else works out:

SAN DIEGO — There’s a stadium just sitting there begging to be used, and a lot of angry fans just waiting to buy tickets. The Raiders are California’s team anyway, though it might get a bit weird when the Los Angeles Chargers come to town.

CAESARS PALACE PARKING LOT — If the Raiders are looking for an iconic spot, this is it. Muhammad Ali fought there, as did Mike Tyson, Marvelous Marvin Hagler and most of the rest of boxing’s greats. They even held a couple Formula One races behind the hotel, so they know how to put on an event. Put up some temporary bleachers, get Wayne Newton to sing the national anthem, and it will seem just like home.

SANTA CLARA — The last thing the Raiders want to do is share the 49ers home field, but they may have little choice. Imagine tech millionaires sipping their trendy drinks alongside the scariest fans in football.

LONDON— What better way to really introduce the NFL to proper Brits than give them the Raiders, if only for a year. Tottenham’s new stadium, should it ever open, was built for the Spurs but also with the NFL in mind.

MEXICO CITY — The Raiders are used to playing on dirt and bad grass, so they’ll feel right at home in Mexico City, where the NFL had to move its latest game at the last moment last year because the field at Azteca Stadium was a mess.

SAN ANTONIO — They’ve got a dome built for an NFL team and been waiting patiently for years to land one. Yes, it’s only for a year, but someone in the NFL should really throw the city a bone.

LOS ANGELES — Never mind. There are already way too many NFL teams in LA, no matter how much the Raiders would like to return to their 1980s home.

OAKLAND COLISEUM — Ok, so the stadium is horrible and there’s a dirt baseball infield in the middle of it. Raiders’ fans don’t complain about it, as long as they’re allowed to get drunk and wear silver and black studded collars to games. Davis should apologize to Oakland politicians for stealing their team, swallow his pride, and pay whatever ransom is needed to finish off one last season there.