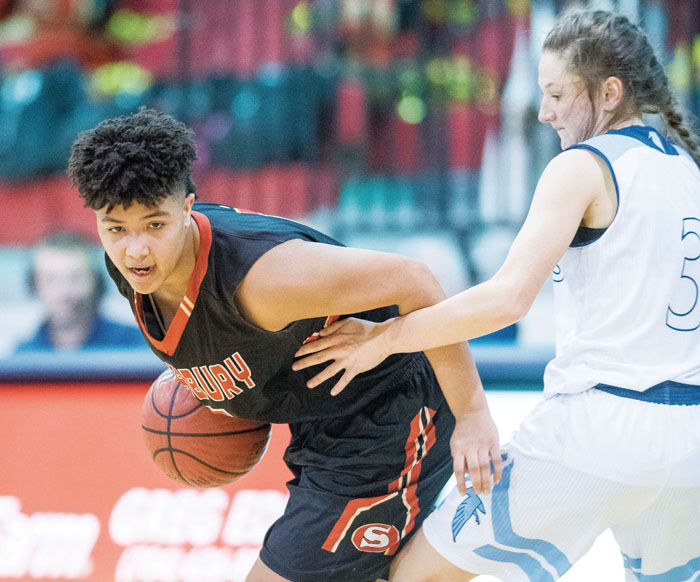 SALISBURY — It was a night of retribution for the Salisbury girls basketball team on Friday.

The Hornets shook off any leftover effects from their midweek loss at Ledford and gained a declarative, 56-47 Central Carolina Conference victory over visiting East Davidson.

“It was an important bounce-back,” said coach Lakai Brice. “I knew my girls would be ready to play, since we took a loss the other night. I think they came in tonight and got the job done.”

Make that a job-well-done. The conference-leading Hornets (18-3, 14-2) avenged an early-January loss at East Davidson en route to posting their ninth triumph in the past 10 games.

“We came out ready and prepared,” junior guard Anayia Fulson said. “We came out hustling and working as a team.”

Teammate Bryanna Troutman — the 6-foot-2 senior who is headed to Wingate in the fall — led the charge with 19 points and 12 rebounds. She scored seven points in the first quarter when East surged ahead and eight more in the second, helping Salisbury mount a 31-21 halftime lead.

“Troutman is a great player,” said longtime East Davidson coach Don Corry. “She always does what needs to be done. And when it was close, she stood up and stood out.”

It was Fulson who turned a spark into a bonfire in the third period. Third-place East (16-5, 11-5), which never trailed by more than 12 points, inched within 39-36 when senior Bailey Grimsley threaded a 3-pointer. Fulson delivered a counterpunch when she drove the right side for an authoritative layup, then beamed in a 3-ball from deep in the right corner with a less than a minute left in the quarter.

“I told them after the first quarter not to look at the scoreboard,” said Brice. “There was still a lot of game left. I told them to just go out there and play their game — and that’s what they did.”

Fulson sensed it was a moment to seize.

“It felt good,” she said, after contributing 10 points and four assists. “And I had faith I could make that long shot. It got us back going how we wanted to.”

That brought a smile to Brice’s face. “Anayia’s been guarding the opposite team’s best player for us,” she said. “For her to pick up big shots like that, when she wasn’t looking for offense, gave us a lift. She’s not in there just for her defense, but I told her at halftime she needed to be a little more assertive with her offense.”

Corry also felt Fulson’s 3-pointer was decisive. “It put us back in the hole,” he said. “We had just hustled back into the ballgame — and then decided to relax. We stood around on offense, no passing, no cutting. It’s like we had paid $6 to watch the game.”

The game-clincher came with 1:05 to play, when freshman Jaleiah Gibson converted a three-point play that bolstered Salisbury’s lead to 55-47. Troutman’s free throw with 13 seconds to go closed the scoring.

“This game brought our focus back,” Troutman said afterward. “We were disappointed in ourselves after losing (at Ledford), but (Brice) has been sending us inspirational stuff ever since. Stuff about not giving up and believing in ourselves. Tonight, we did it and now it’s time to get ready for the playoffs.”

NOTES: Salisbury used an 13-1 run to take a seven-point lead midway through the second quarter. … The Hornets wrap up conference play with games at North Davidson on Tuesday and home against South Rowan next Friday.