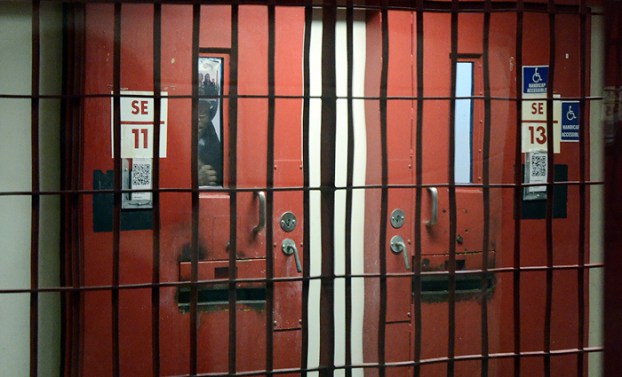 An inmate peers from his cell in a restricted housing or segregated unit at Lanesboro Correctional Institution in Polkton. John D. Simmons/The Charlotte Observer file photo via AP

RALEIGH — North Carolina taxpayers are paying three former inmates at one of the state’s most dangerous prisons $62,500 to settle lawsuits claiming the former warden and supervisors would not clamp down on murderous gangs that terrorized them.

They were among five inmates formerly held at Lanesboro Correctional Institution, about 45 miles east of Charlotte, who said they were stabbed by gang members who operated openly in a prison wing overseen by Jeffrey Wall. Prison guards opened locked doors for Bloods and MS-13 gang members to attack victims Benjamin White, Tavieolis Hunt, Sean Smith, Orlando Harshaw and Stacey Wynn, their lawsuits claimed.

“We hope that the settlements illustrate that people who are in the custody of the state have a right to safety, that administrators have a responsibility to know what’s going on in their prisons,” said Ian Mance of the Southern Coalition for Social Justice, who represented four of the men. “The violence in Lanesboro was pervasive and it should have triggered an intervention and investigation from the state much earlier than occurred. That didn’t happen, and so these plaintiffs filed a lawsuit in part to get people to pay attention to what was happening there.”

The settlements, signed between December and Friday, protect former Lanesboro Superintendent Lawrence Parsons and several correctional officers and sergeants but deny liability by anyone involved in the prison system, according to public records provided to the Associated Press.

Wall, who was fired in 2013, was specifically left out of the settlements to allow inmates to continue legal claims against him, settlement documents said.

Wall has negotiated personal settlements with the inmates that haven’t yet been finalized, according to his attorney, Joseph Ledford. Wall is paying himself to end those lawsuits, said Ledford, who would not disclose the amounts Wall is paying.

Hunt, 39, agreed to drop his lawsuit for $35,000. He is serving nearly 31 years in prison for a statutory sexual offense. The settlement will mean $14,000 to White, 35, who last year completed a nearly nine-year prison term for being a habitual felon. Smith, 38, will get $13,500. He is serving nearly 10 years as a habitual felon. None of the felons is directly receiving the money, which will be controlled by their attorneys in separate accounts.

Harshaw, 45, sued hoping it would improve conditions at high-security Lanesboro but opted to drop his case after the state decided last year to convert the state’s largest prison into a women’s facility, Mance said. Harshaw is serving a life sentence for first-degree murder he committed in Catawba County in 1996.

In July, Wynn lost his lawsuit accusing Parsons of knowing about the life-threatening conditions and responding with indifference so inmates continued to be at risk. Wynn’s life was endangered because the warden didn’t rein in Wall, who seemed to favor Bloods gang members, allowed the criminals to attack others and hid a collection of bloody stabbing weapons in the ceiling of his office, Wynn’s attorneys said.

Lawyers for the inmates say that the soon-to-be-closed Lanesboro was plagued with violence and staff corruption since it opened 15 years ago, a relatively recent addition to a prison system in which many facilities are decades old and outdated.

The five inmates were stabbed over a 10-month period in 2011 and 2012 that culminated in Wesley Turner’s death. He was killed by gang members who prison officers allowed to his cell to “hit” his cellmate. Only after Turner’s killing did Parsons and state prison officials address the corruption and violence, Hunt’s lawsuit said.

State criminal investigators said later that minutes before Turner was killed, two of the three attackers visited the office of an assistant unit manager. Soon afterward, a corrections officer allowed the inmates into the pod where the killing took place, The Charlotte Observer reported in 2014. SBI agents said they don’t know if corrections officers were trying to help the assailants. Bloody homemade weapons were later found hidden in the drop ceiling above Wall’s office.

Wall was fired after he was barred from the Lanesboro prison and tried to force his way back in to retrieve the weapons and videos of his unit hidden in his office ceiling, according to his dismissal letter provided to AP after a public records request. Wall also displayed a gun in his vehicle and threatened that he could “get anyone” from outside the prison, his dismissal letter said.