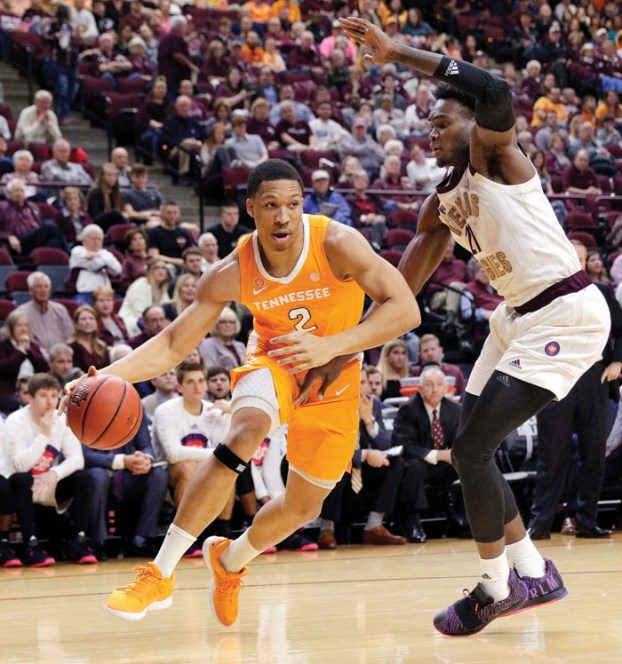 Barnes has taken the Vols to No. 1 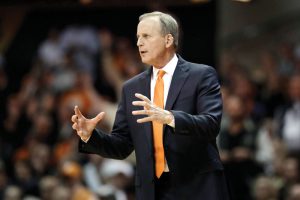 FILE – In this Jan. 23, 2019, file photo, Tennessee head coach Rick Barnes watches the action in the second half of an NCAA college basketball game against Vanderbilt in Nashville, Tenn. The Volunteers don’t have a single top-100 recruit on their roster, yet they’re ranked No. 1 and have a school-record 17 straight victories for the longest active winning streak of any Division I team. (AP Photo/Mark Humphrey, File)

KNOXVILLE, Tenn. (AP) — The top-ranked Tennessee Volunteers are winning without any top-100 recruits on their roster.

They have blossomed into national contenders, winning 17 straight games — the longest active winning streak of any Division I team.

“There’s some programs around the country that could never get by with recruiting the class that we brought in that’s having the success we’re having right now, because their media and their fan base would be screaming that we’re not recruiting the best players in the country,” Tennessee coach Rick Barnes said.

Those players have been good enough to get Tennessee (21-1) atop the rankings.

Barnes arrived at Tennessee in 2015 as the Vols’ third coach in as many seasons. The Vols went a combined 31-35 in Barnes’ first two seasons before winning a share of the Southeastern Conference title last year. Now they’re in position to contend for the first Final Four berth in school history.

Tennessee’s highest-rated prospect according to composite rankings of recruiting sites compiled by 247Sports is freshman D.J. Burns, who is redshirting after being ranked 108th in his class.

The only other team since 2005 to reach No. 1 in the Associated Press Top 25 without any top-100 high school recruits as determined by the 247Sports Composite is the 2015-16 Oklahoma squad that featured Buddy Hield and reached the Final Four. 247Sports’ data doesn’t include the complete recruiting rankings of college rosters from before 2004-05.

“We know we can play with anybody,” junior guard Jordan Bowden said. “Hard work beats talent when talent fails to work.”

Tennessee’s rise is a testament to the coaching staff’s ability to evaluate and develop talent.

It also shows how Barnes has changed the narrative that surrounded him at Texas, where he coached future NBA All-Stars Kevin Durant and LaMarcus Aldridge but got fired despite leading the Longhorns to 16 NCAA Tournament appearances in 17 seasons.

“When he got the Tennessee job, his reputation was recruiter and not necessarily that great a coach or developer,” said Jerry Meyer, the director of recruiting at 247Sports. “Man, has he flipped that script at Tennessee.”

Meyer credits Barnes’ ability to identify ideal fits for Tennessee as proof of his recruiting prowess, even without a top-100 prospect on his roster.

“Obviously it’s not hard to identify five-stars if you’re a coach,” Meyer said. “They’re five-stars. Then it’s just can you beat out the competition to get them. I think the truly great recruiting stories are these kinds of situations. I’d throw Texas Tech as a good example with Tennessee, of finding those under-the-radar type guys. Wichita State did it when they were really good with (Gregg) Marshall.

“To me, those are your greatest recruiters. Those are evaluators, put it that way. They do a great job of evaluating and not just following the herd or looking at numbers from recruiting services or rankings.”

Barnes’ evaluation skills are evident from the players brought in for a recruiting weekend that helped build Tennessee’s program.

The four players visiting that weekend were Jordan Bone, De’Riante Jenkins, Josh Okogie and Grant Williams. Only Jenkins was ranked higher than 171st.

“I remember Jordan Bone was the first that said ‘I want to be a part of this,’” Barnes said.

Tennessee had begun recruiting Bone after his speed caught the eye of assistant coach Rob Lanier, who had been scouting a different guard prospect. Bone now is a three-year starter who leads the SEC in assists (6.6).

Williams, who chose Tennessee over Ivy League and mid-major programs, is the SEC’s leading scorer (20.1). Okogie played two seasons at Georgia Tech before getting drafted in the first round and Jenkins is VCU’s second-leading scorer.

Barnes’ ability to develop talent became obvious from the progress of former Tennessee guard Kevin Punter Jr., recruited by ex-Vols coach Donnie Tyndall. After Barnes suggested he alter his shooting mechanics, Punter watched his scoring average skyrocket from 10.3 in 2014-15 to 22.2 in 2015-16.

“I can’t talk about our foundation without mentioning him,” Barnes said. “He was really the lead guy on it.”

When Tennessee’s younger players saw how Punter improved, they were more inclined to follow Barnes’ instructions.

Kyle Alexander didn’t start playing basketball seriously until his junior year in high school, but the former soccer and volleyball player from Canada has emerged as a quality rim protector. Bowden, a lightly recruited local player, has been a pivotal performer for three seasons. Lamonte’ Turner has a knack for making clutch shots.

“These are all high-character kids with really good work ethics,” Lanier said. “You find out when you meet all these guys and hear all these guys speak, there’s a level of humility they all have. That enables them to receive coaching in a certain way.”

The team’s success has helped Tennessee attract more heralded recruits. Tennessee’s freshman class next season will include guard Josiah James, ranked 16th in his class according to the 247Sports Composite.

As higher-rated prospects gravitate to Tennessee, the Vols want to make sure they sign guys just as coachable as their current players.

“What we have to make sure of is we don’t change our formula just to be sexy,” Lanier said.

MLB hoping to invigorate the sport with rule changes