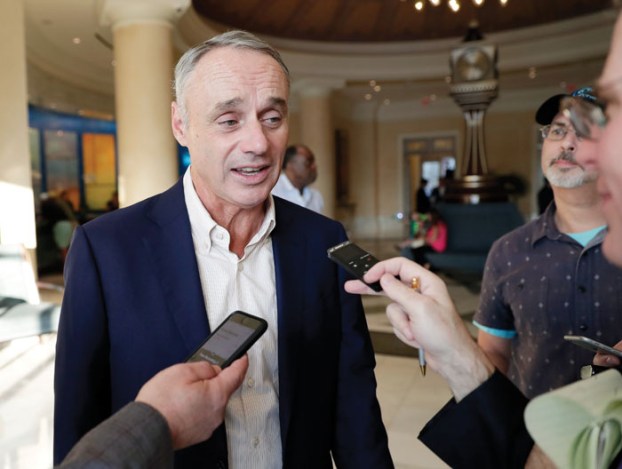 MLB hoping to invigorate the sport with rule changes

ORLANDO, Fla. (AP) — Baseball owners and players are hoping to invigorate the sport with rule changes, though some of the more radical ideas under consideration are not likely to be adapted for this season.

Major League Baseball has proposed that a team not be allowed to bring in a reliever until the previous pitcher has faced three batters or an inning ends. Players want the designated hitter expanded to the National League.

Strikeouts exceeded hits for the first time last year and the big league batting average dropped to its lowest level since 1972, the year before the American League adopted the DH.

“I don’t think any of us are thrilled about more strikeouts and hits,” said Joe Torre, MLB’s chief baseball officer and a Hall of Fame manager. “To me the excitement in our game is basically the potential of things happening on the basepaths.”

Management and the players’ association have taken the rare step of a somewhat expansive negotiation in the middle of a collective bargaining agreement. The current five-year deal extends through the 2021 season.

While pitch clocks are possible for this season, some changes are more likely to evolve slowly. Players would like the relief pitcher restriction to reach the major leagues in 2020. A DH in both leagues could be considered an economic issue by management, one more ripe for discussion in the next labor contract.

The competition committee met Wednesday and the executive council Thursday, and a full owners session is scheduled for Friday. Management proposed changes Jan. 14, the union responded Feb. 1 and the next move is up to MLB.

But following three years of attendance drops and with the sport in the midst of the second slow free agent market, both sides are more willing than last offseason to exchange ideas.

“It’s important to have dialogue to make the game as compelling as possible for the fans,” San Francisco Giants CEO Larry Baer said. “I think we’ve got a great game and I think that with some improvements it will be even a better game.”

Analytics have transformed baseball in a short span, leading to more infield shifts and frequent pitching changes that have combined to suffocate offense. Both sides are concerned fan interest is lost during frequent breaks for pitching changes.

“I think that’s just in an effort to try not to put the game in a test tube,” Torre said. “I think we still have to discover how maybe young pitchers find out how they can get out of trouble instead of going to rescue them when they get in trouble.”

One change in terminology was announced: Deputy Commissioner Dan Halem said MLB is changing the name of its disabled lists to injured lists at the suggestion of advocacy groups for the disabled, including the Link20 Network.

Clubs were notified of the change in a Dec. 20 memo to clubs from Jeff Pfeifer, senior director of league economics and operations in the commissioner’s office. The change was first reported by ESPN.

“In recent years, the commissioner has received several inquiries regarding the name of the ���Disabled List,’” Pfeifer wrote. “The principal concern is that using the term ‘disabled’ for players who are injured supports the misconception that people with disabilities are injured and therefore are not able to participate or compete in sports. As a result, Major League Baseball has agreed to change the name ‘Disabled List’ to be the ‘Injured List’ at both the major and minor league levels. All standards and requirements for placement, reinstatement, etc., shall remain unchanged. This change, which is only a rebranding of the name itself, is effective immediately.”

The major leagues have had disabled lists of 10 and 60 days, plus a seven-day list only for players with concussions. MLB has proposed to the players’ association that the 10-day list go back to a 15-day minimum, its level before 2017.

Where, oh where, should the Oakland Raiders play?

By Tim Dahlberg AP Sports Columnist The Raiders thought they finally found a place to play next season, only to... read more