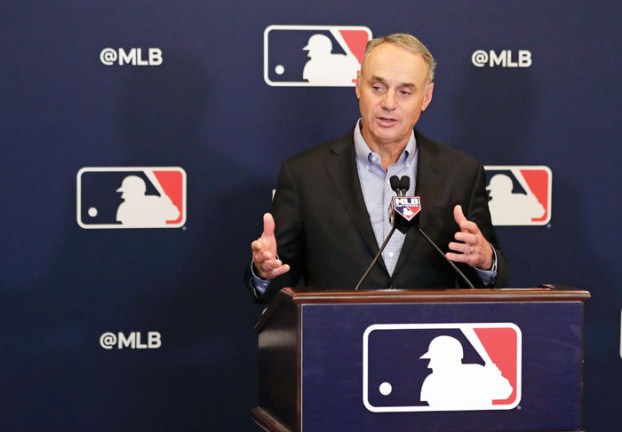 Manfred: No DH or draft changes likely for 2019

By RONALD BLUM, AP Baseball Writer
ORLANDO, Fla. (AP) — Don’t look for a National League designated hitter this year or for new anti-tanking rules in June’s amateur draft.
Baseball Commissioner Rob Manfred said Friday that management is focused on pace-of-game changes for 2019 and bolder ideas proposed by the players’ association are too complex to be put in place for this season.
Speaking Friday after an owners’ meeting, Manfred felt encouraged the union responded to management’s proposal for a pitch clock and a three-batter minimum for a relief pitcher unless an inning ends.
“Some of these items need to be part of broader discussions that certainly will continue after opening day, and I hope we can focus on some of the issues that need to get resolved quickly in the interim,” Manfred said.
Baseball is in its third year of a five-year labor deal, one in which the free-agent market has slowed considerably — even with premier players available such as Bryce Harper and Manny Machado. Management would discuss larger changes as part of a deal for a new collective bargaining agreement extending beyond December 2021.
“I hope and I really do believe that there is a common interest between the players’ association, the players, the owners and the commissioner’s office in changes, whether they’re midterm or otherwise, that make our entertainment product the best it could possibly be,” Manfred said.
After the 2017 and 2018 seasons, players rebuffed management’s proposal for a pitch clock designed to speed to the pace of play. Management has the right to implement a clock, but Manfred has been reluctant to make on-field changes without players’ agreement.
Management presented its latest proposal Jan. 14, one that included a requirement that pitchers face at least three batters or finish an inning. Players responded Feb. 1 with a broader plan, renewing their push for the DH in all games, an earlier trade deadline aimed at discouraging teams with losing records from trading stars, increasing service time for top young stars called up early in the season and rewarding and penalizing teams in the draft based on their records.
“Those are significant economic issues. They are different in kind than the type of playing-rule changes that that we have out there,” Manfred said. “I think that there are pieces of their response on the on-field proposal that were very encouraging. I think what needs to be sorted out is how closely the two agendas are tied, in other words, the on-field stuff and the economic stuff.”
Last offseason, negotiations were hampered by player anger over the slow free-agent market. This offseason’s pace of signings has been faster but remains far slower than most previous years.
“We want players signed, particularly star players. I wish they were signed and ready to go,” Manfred said. “We got another week before they have to report. I’m really hopeful that it’s going to get resolved during that period of time.”
MLB’s proposal that pitchers face a minimum of three batters in an inning unless it ends was designed both for pace and to slow or reverse the increased use of relievers. The union wants its use at the big league level delayed until 2020.
“Repeated pitching changes obviously take a lot of time,” he said. “The idea of relievers having to go longer is appealing in terms of promoting the role of the starting pitcher, encouraging pitchers to pitch a little longer at the beginning of the game. … I think historically some of our biggest stars (are) starting pitchers and we want to make sure those big stars are out there long enough that that they are marketed.”
ATTENDANCE
After three straight years of drops that left attendance at its lowest since 2003, Manfred said it is too early to speculate about 2019.
“We’re hopeful that we see a rebound from last year but, again, difficult to predict at this point,” he said.
He said he doesn’t think the operation of the free-agent market was a big issue affecting ticket sales.
“I do think that negative commentary surrounding the game that is not factually supported can have an impact on attendance — assertions about clubs not trying to win and the like, I think that’s not helpful,” he said.
GAMBLING
MLB has talked to the union about expanding the anti-gambling provision section of the Major League Rules to prohibit the disclosure of confidential information that could be used in betting.
REVENUE SHARING GRIEVANCE
Manfred said the union is still in the fact-gathering stage of its grievance filed last winter accusing Miami, Oakland, Pittsburgh and Tampa Bay of not properly spending money they received in revenue sharing.
On other matters:
SOCIAL MEDIA
MLB will make game highlights available to players for use on social media.
150TH ANNIVERSARY OF PRO BALL
Teams will wear a special patch to mark the 150th anniversary of professional baseball, and there will be special hats on opening day. The Cincinnati Reds, the first pro team in 1869, will be at the forefront of the celebration.
REGIONAL SPORTS NETWORKS
MLB received a second round of data in its effort to purchase 14 team regional sports networks from The Walt Disney Co., which is selling them after acquiring the networks from 21st Century Fox. If successful, MLB could resell rights to streaming services or cable providers. “I think that we recognize that the media landscape is changing quickly and if somebody is going to be managing that changing landscape, we just as soon that it be us,” Manfred said.
RAWLINGS
MLB extended its agreement with Rawlings to supply baseballs, a deal that also includes helmets and gloves.
EXECUTIVE COUNCIL
Boston’s John Henry and Colorado’s Dick Monfort were elected to the executive council, replacing Atlanta’s Terry McGuirk and the New York Yankees’ Hal Steinbrenner. The council also includes the Chicago Cubs’ Tom Ricketts and Tampa Bay’s Stu Sternberg (whose terms expire in 2020); San Diego’s Ron Fowler and Houston’s Jim Crane (2021); and Milwaukee’s Mark Attanasio and Jerry Reinsdorf of the Chicago White Sox (2022).
___
More AP MLB: https://apnews.com/tag/MLB and https://twitter.com/AP_Sports

By The Associated Press Another 12 million has been added to CBS’ viewership totals for the Super Bowl. The network... read more