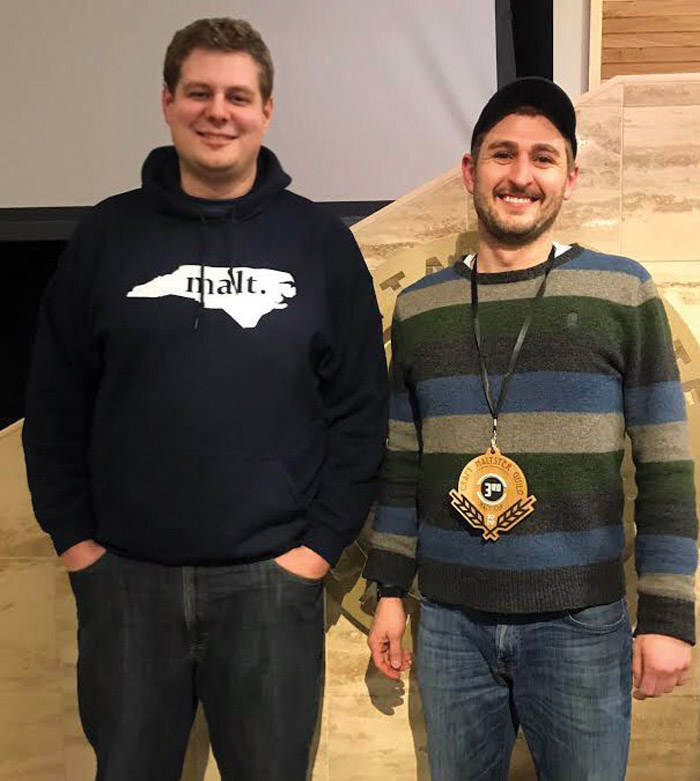 Aaron Goss, left, and Steve Bauk are co-founders of Carolina Malt House. Bauk is wearing a medal the company won recently in an international competition.

CLEVELAND — Carolina Malt House, a homegrown company that makes malt from Carolina-grown barley, won a medal in an international competition to make the best malt.

The award was presented at the international Craft Maltsters Conference in Bozeman, Montana, on Feb. 2. The winning malt was Carolina Gold pale malt.

The Rowan County company is on U.S. 70, just outside Cleveland.

Malt is the defining ingredient of beer and is also used in the production of many liquors. It is made by controlling the germination of barley and other small grains.

“It’s exciting to place among the best malts in the world after less than a year of operation,” co-founder Aaron Goss said. “This is a huge step in establishing the Carolinas as a great region for producing beer.

“Our Carolina brewers have proven that we have great expertise and water, and this success on our very first attempt confirms that together with our excellent team of growers, we produce some of the best barley malt in the world to support those brewers.”

The contest had 21 entries from multiple countries. Entries were judged primarily on flavor and also on a laboratory test of brewhouse performance, ability to support a variety of brew styles, color and other metrics.

The competition category was pale malt, a style that is used as the base of many popular beers, providing alcohol content, beer flavor and a golden color.

A company news release said it is “proud to have shown that the Carolina growing region produces world-class barley.”

“Craft maltsters make the best malt in the world, so this recognition is really special,” said Steve Bauk, Carolina Malt House’s other founder. “This was a very tight competition. We’re honored to be among the entrants, let alone winning a medal.

“Especially since we designed our own machines, it feels really great to see that we can get these great outcomes,” Goss said. “We’re excited to tell our farmers. This is as much their work as ours.”

Visit www.carolinamalt.com to learn more about where to find beer and liquor made with the Carolina-grown malt.