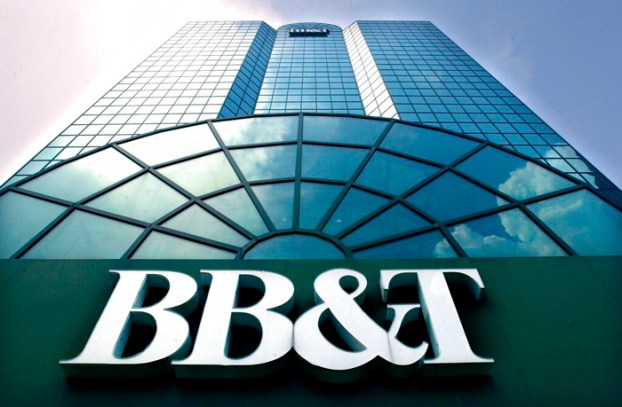 FILE - This Aug. 22, 2003 file photo shows the corporate headquarters of BB&T in Winston-Salem, N.C. Southern regional banks BB&T and SunTrust are combining in an all-stock deal valued at about $66 billion. The banks said Thursday, Feb. 7, 2019 that the combined company will be the sixth-largest U.S. bank based on assets and deposits. It will have approximately $442 billion in assets, $301 billion in loans and $324 billion in deposits serving more than 10 million households (David Rolfe/The Winston-Salem Journal via AP)

NEW YORK — Southern banking giants BB&T and SunTrust said Thursday they will merge in a $66 billion deal, the first big bank merger since the chaos of the 2008 financial crisis. The deal would create yet another financial titan in the U.S.

The combined company will be the sixth-largest retail bank in the country, putting BB&T and SunTrust in the ranks of megabanks like JPMorgan Chase, Bank of America and Wells Fargo.

The banks said Thursday that the combined company will be have $442 billion in assets, $301 billion in loans and $324 billion in deposits serving more than 10 million households. The two banks’ market share will make them a formidable presence in the South, particularly in growing parts of the country like Atlanta and Nashville, Tennessee. The companies operate banks from Pennsylvania to Florida and as far west as Texas.

Big bank mergers had been nonexistent after the financial crisis, when a flurry of government-directed mergers created a handful of megabanks. Wells Fargo merged with Wachovia, JPMorgan acquired Bear Stearns, and Washington Mutual and Bank of America purchased Merrill Lynch. Most bank mergers stopped after the crisis because the banks had to clean up their balance sheets, and the regulatory environment under the Obama administration made mergers more difficult.

Since that time, the gap between the size of the big Wall Street banks and the regional banks like BB&T, SunTrust, PNC Bank, Fifth-Third and others has only widened. The only bank with the size and scale of the new merged BB&T-SunTrust would be Minneapolis-based U.S. Bank, which has a large presence in the Midwest and Rocky Mountains. But even U.S. Bank with $456 billion in assets is dwarfed by the next largest institution, Citigroup, which has more than $1.4 trillion in assets.

The Trump administration is taking a much softer stance on bank regulations and has appointed dozens of new business-friendly policymakers into critical positions at the nation’s bank regulators. Further, Congress passed a law last year to ease some of the rules put into place under the Dodd-Frank Act after the financial crisis.

“The regulatory environment is much easier for something of this size to happen,” said Brian Klock, an analyst with KBW.

Klock said he believes that with attention of the SunTrust-BB&T deal, as well as the easier regulatory environment, more large bank mergers may be coming.

The combined company will keep a presence in Winston-Salem, where BB&T is based. It will keep a wholesale banking center in Atlanta, where SunTrust has its headquarters.

BB&T and SunTrust have about 740 branches within 2 miles of each other, or about 24 percent of all branch locations run by the banks. BB&T Chairman and CEO Kelly King said during a conference call that the companies will be “careful and methodical” about which branches they close.

“It’s an extraordinarily attractive financial proposition that provides the scale needed to compete and win in the rapidly evolving world of financial services,” King said in a prepared statement.

King will be chairman and CEO of the combined business until Sept. 12, 2021. After that, he will serve as executive chairman for six months. He’ll serve on the board until the end of 2023.

Bill Rogers, chairman and CEO of SunTrust, will serve as president and chief operating officer of the combined company until Sept. 12, 2021. He will then become CEO for six months, after which he’ll add board chairman to his title.

BB&T dates to the late 1800s in North Carolina, where it began in Wilson as Branch Banking and Trust Co., named for Alpheus Branch, a North Carolina businessman.

The company has grown through acquisitions, including the 2003 acquisition of First Virginia Banks of Falls Church, Virginia.

SunTrust has been a key player for more than a century in the Atlanta business community. It is known for its long-standing business relationship with Coca-Cola Co.

SunTrust was paid in shares of Coca-Cola as compensation for underwriting the beverage giant’s initial public offering in 1919. The bank sold those shares several years ago to help tune up its risk profile as part of stress tests imposed by federal regulators. Forbes reported at the time that the company sold its 60 million shares for a pre-tax gain of $1.9 billion, some of which went to the SunTrust Foundation.

Man charged with attempting to break into Salisbury church

SALISBURY — A South Carolina man is charged with attempting to break into a Salisbury church with his 2-year-old son... read more