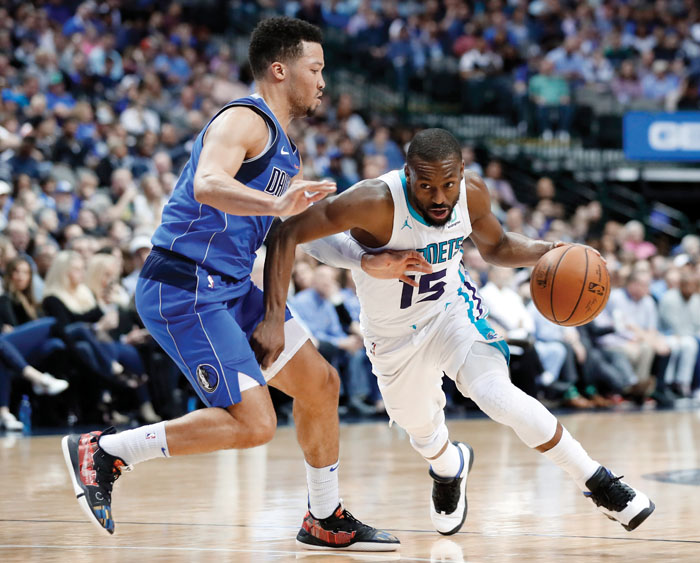 Dallas Mavericks guard Jalen Brunson (13) defends as Charlotte Hornets guard Kemba Walker (15) works for an opening to the basket during the first half of an NBA basketball game in Dallas, Wednesday, Feb. 6, 2019. (AP Photo/Tony Gutierrez)

DALLAS (AP) — Luka Doncic scored 19 points in his third triple-double, Dorian Finney-Smith had 15 points and 10 rebounds and the new-look Dallas Mavericks made another move by trading Harrison Barnes while beating the Charlotte Hornets 99-93 on Wednesday night.

Tim Hardaway Jr. scored 12 points in his Dallas debut after the blockbuster deal that brought Kristaps Porzingis from the New York Knicks. Porzingis isn’t playing this season as he recovers from a knee injury.

Barnes played into the third quarter before reports of a trade with Sacramento surfaced. He was on the bench but didn’t play in the fourth quarter. Barnes scored seven of his 10 points in the third.

Two people with knowledge of the deal said the Mavericks sent Barnes to the Kings for Zach Randolph and Justin Jackson. The people spoke on condition of anonymity because the trade hadn’t been announced.

Kemba Walker had 30 points and 11 rebounds for the Hornets, who got swept by Dallas after losing to the Mavericks by 38 points at home about a month ago.

With NBA Commissioner Adam Silver watching from not far behind the Mavericks bench, Doncic had a spinning layup for a 3-point play with Dallas leading by two. The first teenager with multiple triple-doubles, Doncic had 11 assists and 10 rebounds on a rough shooting night (5 of 20, including 2 of 10 from 3-point range).

After Nicolas Batum scored two of his 14 points to get Charlotte within three, Finney-Smith hit a 3-pointer for a 97-91 lead in his second career double-double.

Hornets: G Tony Parker was out with a back strain in what would have been his first appearance in Dallas since leaving San Antonio after 17 seasons with the rival Spurs. … Jeremy Lamb scored 15 points, and Cody Zeller had 13 rebounds with nine points.

Mavericks: After setting franchise record for 3s in a quarter by going 10 of 17 from long range in the first quarter of the meeting in Charlotte, the Mavericks missed their first 10 before Hardaway and Doncic hit consecutive 3s in the final 1:11 of the first. … Trey Burke was scoreless in four minutes in his Dallas debut. Courtney Lee, also part of the New York trade, didn’t play.

Hornets: Second stop on a four-game trip at Atlanta on Saturday.

Mavericks: Second of three straight at home against Milwaukee on Friday.