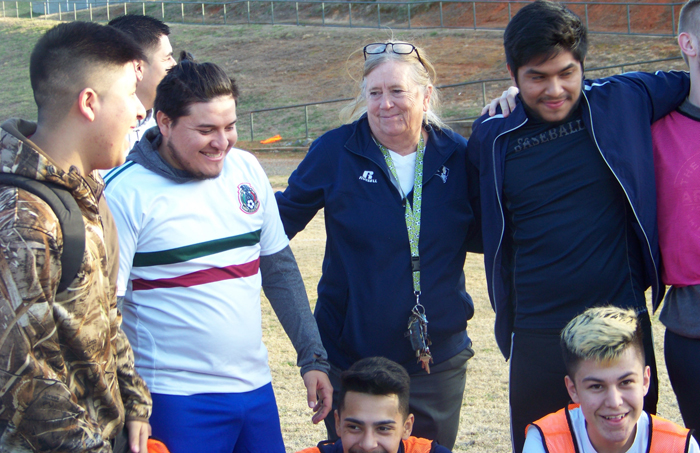 Another, shared by the Southeast student body after Mitchell’s Jan. 31 retirement, is a bit more endearing.

“They call her Mama Mitchell,” said Paige Smart, an eighth-grade English teacher at the middle school.

Becky Borst, the mother of three children who attended Southeast during Mitchell’s time at the school, explained.

“This woman knew every child’s name,” Borst said. “Not only was she the school’s athletic director and a PE teacher, she would step in as a parent for these kids as well. She was more than just an employee.”

Mitchell began her work at the Rowan County school in August 2001, having moved to Concord that July. The job came to her quickly, she said, “but it ended up being the most incredible job I ever had.”

Aside from her work as a PE teacher and athletics director, Mitchell had served Southeast as a boys soccer coach since 2006. In that time, she led the team through 148 wins, eight ties and six loses.

Her dedication on the field gave her ample opportunity to earn her matriarchal title among students. In volunteering to take players home from practice, she developed close-knit relationships with the diverse families of the Southeast community.

“I embraced them, and they embraced me. … I was just part of the family,” she said. “I think in this day and age when there’s so much diversion over immigration, they were all just thankful that someone wanted to love their children like they did. And I did.”

Bridgette Goodine, an intervention specialist at Southeast, said Mitchell has a natural ability to make anyone feel at ease.

“She just connects with everyone,” Goodine said. “She really worked to find out about each individual student and their families. The kids love her and open up their hearts to her.”

Goodine said there are “no words to describe the lives she’s touched,” and Mitchell’s former student athletes agree.

“Southeast soccer was truly never just a soccer team. It was a family,” said 20-year-old Southeast alum German Delgado. “We all had our ups and downs but that didn’t matter because we all knew Coach Mitchell was there for us.”

“We could always come to Coach Mitchell if we had a problem and she would find a way to help,” said Kaleb.

Cameron, 24, now works as a track and field coach, and Mitchell gave him his first coaching job.

“It was an honor and a privilege to work for Coach Mitchell,” he said. “Mitchell is a phenomenal teacher, athletic director and soccer coach, but most importantly (she’s) an even better person.”

Co-worker Smart said that more than anything, Mitchell was a listening ear. “You could tell her anything and you never got any judgment.”

Smart said Mitchell helped her through her first and most trying year of teaching, a year when she was contemplating leaving the teaching profession altogether. She did so through not only listening but providing constant encouragement and advice.

For Mitchell, the decision to offer support for fellow educators is natural: the worlds of education and athletics are the worlds of her heart, she said.

“It is a heartfelt profession that so desperately needs people that care about children,” said Mitchell. “Don’t look for all the highs because the lows often turn into something you were never expecting. These kids give you what you need to go on. … It will be a rewarding life if you let it.”