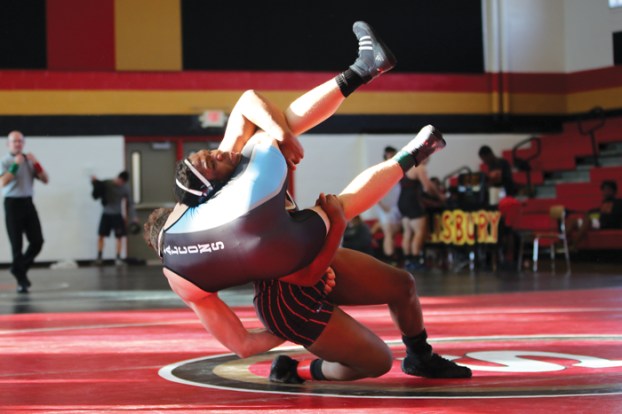 James Sipes file photo/for the Salisbury Post ... In a file photo from 2017, Salisbury’s Kevion Chunn, underneath, lifts West Rowan’s Baiden Suddarth and picks up a win in the 195-pound division of the Rowan County Championships.

Chunn gets it done on the mat 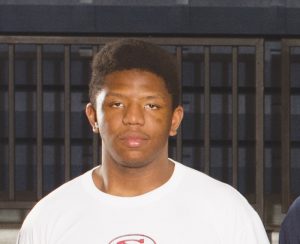 SALISBURY —  Kevion Chunn has provided four years worth of memories for Salisbury wrestling coach Tim Pittman, but the night of Jan. 18, 2019, may linger longest.

It was Senior Night at SHS. The Hornets were struggling in a tense match with East Davidson. In storybook fashion, Salisbury trailed, 42-36, going to the final match — the heavyweights.

A decision by Chunn wasn’t going to be enough. The Hornets had to have a pin.

“That got us even at 42-all, and then we win that match on criteria,” Pittman said. “Not only that, it’s the 150th career win for Kevion. Quite a Senior Night.”

Chunn’s win total — it increased to 153 with his championship in the recent Central Carolina Tournament — is a school record for the Hornets.

The county record is acknowledged to be the 173 matches (against only 13 defeats) that Danny Misenheimer accumulated at East Rowan from 1996-2000. Next on the list is Misenheimer’s teammate Steve Fox, who was 166-15 in a storied career. Both were state champions for coach Barry Justus in 2000.

The point is that Chunn, who has wrestled at three different weight classes, ranks very high, not just in Hornet history, but in county history.

“I’ve done this a long time as a competitor and as a coach,” Pittman said. “I’ve never  been associated with anyone with 150 wins. To win 100 as a high school wrestler means you’ve had a very strong, very successful career. But to get to 150 – that’s pretty special.”

Getting to work with people like Chunn is the reason Pittman and his assistants coach. Chunn is a 4.0 GPA student who comes to practice early and stays late. He does what he’s supposed to do. Since it’s his fourth year as a standout, younger SHS wrestlers look up to him.

“He’s our only senior and he’s been part of it for a long time, so he’s really been like an assistant coach this season,” Pittman said. “He teaches as much as he practices.”

Chunn would like to have a dollar for every time someone has asked him, “Why wrestling?” or “Why not football?”

Football certainly gets more attention, attracts more media and has more college scholarships available. Chunn, who is very large and very athletic, would seem to be a sure-fire football lineman.

“I did try football in middle school, but it just wasn’t my thing,” Chunn said. “But wrestling, that was different. I loved it right away and I picked it up really fast.”

Pittman remembers Chunn hanging around as a seventh-grader, pleading to go to tournaments with the high school guys. Pittman had to break the news to him that he wasn’t ready yet, but he told his time would come.

“We thought about getting him down to 195, but his freshman year we had a pretty good team and we just wanted to him focus on becoming a better wrestler and didn’t want him worrying so much about cutting weight,” Pittman said. “He had a solid freshman year at 225.”

Chunn was the first freshman to qualify for the state tournament for Pittman since he became head coach at Salisbury. Chunn placed fourth in the 2A Midwest Regional to qualify.

As a sophomore and junior, Chunn did wrestle at 195 pounds and found major success.

He was 43-5 as a sophomore, placing third in the regional to return to the state event. He won two matches in the state tournament.

Chunn was 44-12 as a junior, logging his 100th career win in January, 2018. He was regional runner-up and again won a couple of matches in the state event.

“He wrestled really well,” Pittman said. “He just came up a little bit short of the podium (placing in the top six).”

Chunn beefed up quite a bit between his junior and senior years. So he’s wrestling at heavyweight this season for the first time.

A highlight was a runner-up finish in the “Holiday Hammer,” a major tournament in Abingdon, Va. That tournament attracts a strong field of wrestlers from many states. Chunn reached the final and was runner-up.

“It’s been a good season,” Chunn said. “That 150th win was really exciting and we’ve wrestled in a  lot of competitive tournaments. It’s also been a good year in the classroom.”

Chunn said he’s been accepted as a student at two universities — Appalachian State and UNC Pembroke — that have strong wrestling programs. Academically, he’s interested in pursuing a nursing degree.

Now it’s crunch time for Chunn as far as his wrestling career.

On Friday, at Lexington High, Chunn will go to work in his fourth regional. He’s ranked 10th among 2A heavyweights in the state, but he has a good chance to claim a regional championship for the first time. That would mean a favorable seed for the state tournament.

And there’s no substitute for experience.

For all his size and power, Chunn is soft-spoken.

Asked what a regional championship and a podium finish at the state tournament would mean to him, he was humble.

“It’s a tough regional, a lot of great wrestlers, so the first goal is to try to qualify for the state,” Chunn said. “All I can do is try my best. To place in the state, that would be a great accomplishment. That would mean everything to me.”

Salisbury has plenty of wrestling tradition, but the last state title won by a Hornet was by Will Mowery in 2008. Gordy Witte won back-to-back state crowns in 2006-07. In 2001, Salisbury produced a pair of state champs, with Willie Hosch winning his first title and Dwyane Coward taking his second in a row.

Chunn has been county champion twice and CCC champion three times. He probably would’ve been 4-for-4 as far as CCC championships, but they didn’t have a tournament one year.

“Kevion is just a wrestling guy,” Pittman said. “He’s always taken great pride in being the best at what he does, whether it’s on the mat or in the classroom.”