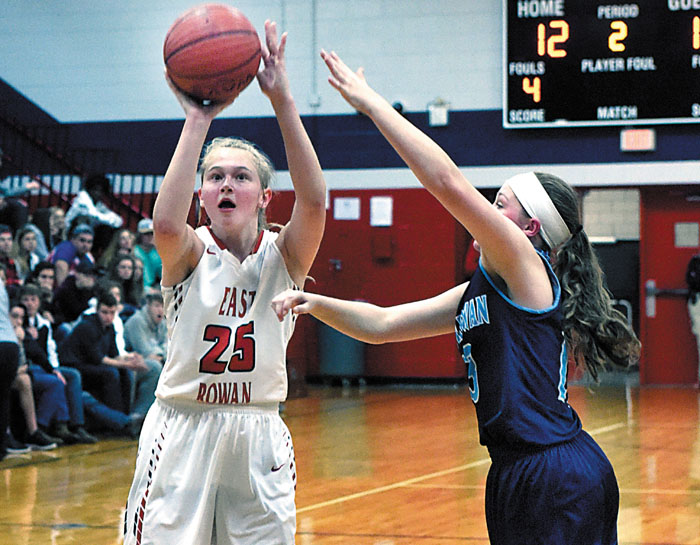 Well, East Rowan’s girls cared a lot. It was Senior Night. They needed a win.

Visiting North Stanly also cared. The Comets have turned things around lately and winning is contagious.

East got great performances from freshman Mary Spry (career-high 22 points) and junior Adalie Harrison (19) and won, 51-46. It was a terrific game. The Mustangs  (13-8) were behind a lot more than they were ahead.

“We need to play better, but we were down 11 in the second half and we still won,” relieved East coach Kevin Holland said. “That’s a sign of some solid progress from where we were the previous two years. This was our 13th win and that means we’ll have a winning regular season. We’re contending for a playoff spot.”

North Stanly coach Greg Speight had his girls ready to spring an upset.

“Tonight was as well as we’ve played all year,” Speight said. “East is a good team. If we can play like we did tonight, we can win our last four games in the Yadkin Valley Conference.”

When this game was rescheduled, it looked like an easy win for 3A East against the 1A Comets (4-13). But Holland had been watching the scoreboard with some concern. North Stanly lost by 10 to a highly ranked Albemarle recently and had notched wins in its last two outings.

“I knew they were getting better every game,” Holland said. “I knew if we didn’t play well we weren’t going to win. That’s a message I tried to get across to my team.”

There was lots of emotion in the East gym. Carmen Fraley and Nicole Fleming, who don’t get to play much, got Senior Night starts. A big crowd roared.

North Stanly wasn’t fazed by the noise, connected on early shots, took an 8-2 lead, and then a 14-5 lead. East would play uphill until the middle of the fourth quarter.

“They surprised us,” Harrison said. “And we were fouling too much and we weren’t boxing out.”

Harrison got a steal and a bucket shortly before the half. East made it to the locker room, down 25-23.

A lot of people thought North Stanly had taken its best shot, expected East to take control as soon as the second half got under way, but the Comets weren’t done. Quick freshman guard Lexi Goode flipped in a baseline runner as she was fouled, and then she nailed a 3-pointer. When junior Payton Landis turned a steal into a breakaway layup, the Comets had started the second half on a 10-1 run and were up 35-24. That was high tide for the visitors. There was 2:55 left in the third quarter.

Spry scored nine in the first half despite foul trouble, and with the Mustangs in a desperate situation, East guards Harrison and Madie Honeycutt started looking for the agile, 5-foot-10 freshman in the paint on every possession. Spry’s three-point play triggered East’s comeback. By the end of the third quarter, East still trailed 37-31, but momentum was swinging.

“My teammates were making really good passes,” Spry said. “I can’t do anything without them. In the first half, I was popping open, but the pass was getting their a little late. Once I started getting the ball earlier, I had a good chance to score.”

Spry scored the first five points of the fourth quarter, and East finally caught up for the first time all night at 38-all with six minutes left.

“Spry really hurt us, and I can’t believe she’s only a freshman,” Speight said. “We didn’t really have anyone who could match up with her. We tried to help on  her, but East was moving the ball so well it was hard to do it.”

Honeycutt, another East freshman, scored the fast-break layup that put the Mustangs on top, 40-38, with 4:41 left.

North Stanly, so hot early, had gone ice-cold, and then Harrison knocked down the game’s biggest shot — a left-wing 3-ball with 3:55 left that pushed East’s lead to 43-38.

There were still anxious moments because Spry went to the bench with 3:27 left to play after her fifth foul.

But Harrison wasn’t going to let East lose. She scored 11 in the fourth quarter. After Spry went out, she made three straight clutch shots — two drives and a pull-up — and her teammates rode her hot hand.

“When Mary fouled out, I knew I had to do a little bit more,” Harrison said. “We had to get points.”

Harrison controlled the ball down the stretch, and North Stanly had to foul her. On the other end, with Spry out, East got big defensive boards from Grace Eagle and Caroline Houpe.

“We just put the ball in Adalie’s hands at the end, and once it’s in her hands, it’s hard for the other team to get it out,” Holland said. “She’s started every game for three years. That’s a lot of experience.”

Camille Shelton and Goode scored 13 each for the Comets.