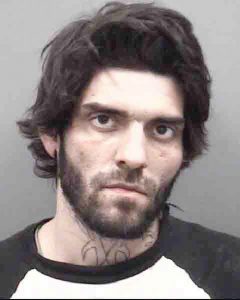 A China Grove man was charged with assault after he spit on and kicked a Rowan County sheriff’s deputy in the face, cutting the officer’s eye.

The man was arrested after a traffic stop and a deputy discovered he was driving a vehicle with a fictitious license plate.

The Rowan County Sheriff’s Office charged Marcus Dipietro, 27, of the 100 block of Beth Drive, with two counts of misdemeanor assault on a law officer; misdemeanor injury to personal property; misdemeanor possession of drug paraphernalia; felony malicious conduct by a prisoner; driving while license revoked; displaying an expired registration plate; and providing false information to an officer.

He also was charged with a probation violation.

Authorities said that about 10:20 a.m. Wednesday, a Rowan deputy stopped a brown Jeep Cherokee at U.S. 29 and Old Beatty Ford Road after seeing the fictitious tag.  The driver initially handed Deputy Corriher identification for Hunter Harmon and said that his license was revoked.

The driver consented to a search of the vehicle and the deputy found a needle close to where the driver had been seated. The deputy also found a wallet with an ID for Marcus Dipietro, who was determined to be the driver.

Rowland and Corriher struggled with Dipietro, who spit in Corriher’s face, a report said.

As Rowland tried to put leg restraints on Dipietro, the suspect kicked Rowland in the eye, breaking his sunglasses and cutting his eye.

Officer Porter of the Landis Police Department arrived, and Dipietro was restrained and put back into the patrol vehicle.

Dipietro remains in the Rowan County Detention Center under a $75,000 secured bond.