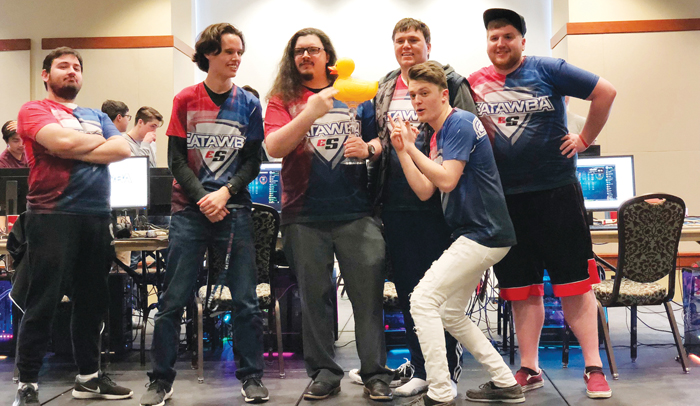 In its first exhibition, the new Catawba’s eSports team went head-to-head against the University of North Carolina at Charlotte in a League of Legends match on Sunday.

The match was played live at UNC-Charlotte and streamed on Twitch.tv. It showcased five Catawba eSports players whose specialty is League of Legends.

“I was surprised in the third game. In the time that I’ve worked with this team, the third game was the cleanest game – almost a perfect game – that I’ve seen them play,” said Catawba eSports coordinator Gidd Sasser.

He said the team spent two to three weeks practicing three days a week against other teams at other schools.

“We practiced based on some scouting of the UNCC team that I had done,” he said. “It was a lot of paperwork and a lot of statistical analysis.

“I think the guys did a pretty good job. On a mental level, they showed that it’s easy to be happy and excited to win a game, but when UNCC fired back and took the second game away from us, they showed that they could reset mentally and come back to win the third game. In that third game, we only had one death the entire game.”

Although Sasser said he’ll be investigating show matches and exhibition play for other members of the Catawba team who specialize in different games, such as Overwatch and Rocket League, his priority this semester will be on academics.

“I want the entire team to be able to go into next fall semester ready to succeed, not just ‘on the field’ but in the classroom as well,” Sasser said, noting that all but one member of the eSports program are transfer students who selected the college based largely on the fact that it offers an eSports program.

In addition to the six players who competed Sunday, other team members include Sarah Engle of Concord, who also is team manager; Jeremias Jiron of Orlando, Florida; Christian Horrigan of Bedford, Texas; Logan Rogers of Crandall, Texas; Megan Horton of Lexington, the first varsity player recruited from Catawba; Emanuel Hodge of Denton, Texas; and Cole Striet of Wichita, Kansas.

Sasser joined Catawba on Oct. 1 and was responsible for planning and equipment for the eSports gaming lab. An open house of that facility was held Jan. 31 for the campus community.

Additionally, Sasser was responsible for recruiting members of Catawba’s eSports program. All but two of Catawba’s 12 varsity players, Engle and Horton, had played for Sasser when he was director and head coach of Kansas Wesleyan University’s National Association of Collegiate eSports varsity program.

Sasser also led UNC-Charlotte’s student-run eSports program between August 2015 and March 2018, serving as its manager, coach, analyst and adviser. That team of about 50 players was Collegiate Southern Champions in 2017, with as 10-0 season in Overwatch and a 5-0 playoffs record with Rocket League.

Although Sasser no longer leads UNCC eSports, he is an independent adviser for that organization as well as for other collegiate teams at North Carolina State University and Colorado State University.

He is a guest coach and adviser to university teams participating in national playoffs. He has worked as an independent adviser for 5 Kings eSports, Koyobi LLC, HotShots Sports Bar, and Tespa.

A schedule of matches for the fall will not be set until early in the 2019-20 academic year.