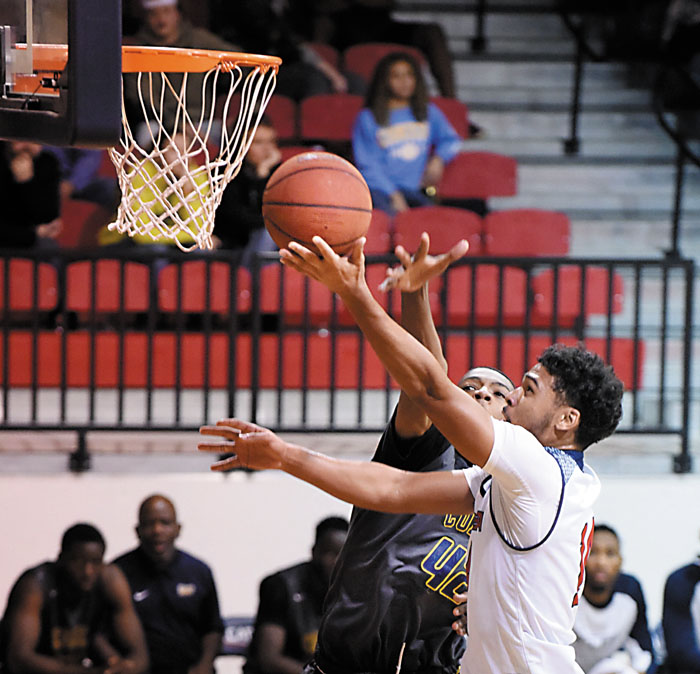 SALISBURY  — Who knew the second week of February could get any hotter?

Put the Catawba men’s basketball team on that list after it shot 55 percent from the field and used a robust finishing kick to beat Wingate, 84-75, Wednesday night at Goodman Gym.

“They’re one of the best defensive teams in the South Atlantic Conference,” Catawba coach Rob Perron said. “For us to shoot 55 percent against them, that shows a level of maturity on our part. In the first half we might have been a little too eager, penetrating the lane with two defenders in front of us. In the second, we were more patient and it paid off.”

It certainly did. Despite coughing up all of a 16-point second-half lead, Catawba (16-5, 9-4) has cobbled together a three-game winning streak and ascended into a tie for third place in the conference standings.

“I’ve been here for five years and Wingate always plays us hard,” said guard Jameel Taylor, one of five Catawba scorers to crack double figures. “It’s never easy with them. But this game made us realize we can never get complacent if we’re going to get where we want to go.”

That would be the NCAA Division II regionals, a post-season prize that’s within reach but more than a month away. First Catawba had to rally past the Bulldogs (13-9, 9-5), which blocked 13 shots and handled the still-evolving Indians in a December matchup. This time Taylor shot 7-for-14 from the floor and contributed 14 points, nine rebounds and six assists — then joined in a giddy, post-game celebration.

“The three straight losses in January were good for us,” 6-foot-4 senior Jordan McElveen said, with a straight face. “That made us practice harder and work to get better. It’s the reason we’re rolling now and looking forward to March.”

McElveen (12 points, 7 rebounds) made the loudest — and possibly most important — of Catawba’s 33 baskets. It came after the Indians appeared to hit an oil slick with the checkered flag in sight, watching a 56-40 lead evaporate 5:26 to play. Wingate took its first lead since midway through the opening half when Quantra Taylor scored on an express-train layup.

“They were killing us in the paint, which makes it really hard to win,” said Wingate coach Brian Good. “They kept going to the rim and we couldn’t stop them. We had to tell our guys like four times before they finally listened.”

When they did, they caught fire. The visitors scored 15 unanswered points — a spree that included back-to-back 3-pointers by 6-5 senior guard Marco Haskins — and surged ahead 66-65. It was 68-all after Wingate’s Emarius Logan converted two free throws right out of the last media timeout with 3:48 remaining.

“I think we got too comfortable with the lead,” said Catawba’s Taylor. “We started missing defensive assignments and let Haskins get hot. He made some really tough shots from the corners that sparked his team.”

It was McElveen and teammate Marcell Haskett (18 points, 3 assists) who doused the rally. Haskett penetrated the lane, drew double coverage, and bounced a pass to McElveen — who navigated the left baseline and put Catawba back on top with an industrial-strength jam.

“It was a great drive by Marcell,” said McElveen, who shot 5-for-8 from the field. “My man must have cheated over to him and he got the ball for a big finish.”

Less than a minute later, Haskett drained a 3-ball from the left side to fuel Catawba’s 16-7 closing argument. The Indians sealed the verdict by making seven of eight free throws in the final 50 seconds.

“It’s not a tough one to lose,” Good said after Wingate’s three-game winning streak was snapped. “Catawba’s a really good basketball team and we were in position to win with three minutes to go. You have to make plays — and they did, including some really good ones. We’re not going home disappointed.”

Catawba, meanwhile, is riding a bit of a heat wave — and it has nothing to do with the recent spike in mid-winter temperatures.

“We’re right where we want to be,” Perron said. “In position to finish top-two in the conference. We’ve just got to keep it going.”

NOTES: Catawba has seven conference games remaining, beginning with Saturday afternoon’s visit to Mars Hill. … Taylor moved into fifth place on Catawba’s all-time scoring list with 1,685 career points. … Perron recruited Haskins when he transferred from Chowan before the season. He was the CIAA’s Rookie of the Year in 2015-16. … Catawba held a 48-28 edge in points-in-the-paint, a telling statistic.