The Salisbury native has decided to remain a part of the administration as vice president of development.

Dees, who served on the board of trustees between 2015 and the start of her interim appointment in August 2017, joined Catawba as an executive on loan from the Charlotte-based Foundation for the Carolinas, where since 2008 she was vice president of philanthropic advancement and affiliate development. 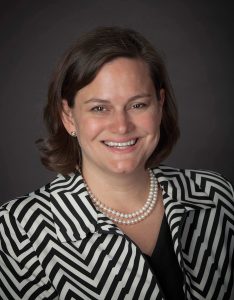 “Meg has been a wonderful addition to Catawba’s administrative team since she stepped into her role as interim vice president of development,” said Catawba President Brien Lewis. “In the time she has been on board, she has helped us ramp up staffing and training in the development office and launch a three-year, $38.2 million Mind Body Soul campaign. She is respected and well-known in philanthropic circles and has helped us renew our institutional effort to cultivate stewardship among our alumni, friends and donors.

“Meg intimately knows the importance of giving — that it’s not always just about how much, but rather the importance of making a gift. She’s going to be instrumental in Catawba’s efforts to grow a new generation of good stewards for our institution.”

Dees will continue to lead the development staff and oversee fundraising, including cultivation and outreach to donors, alumni and parent relations and area community foundations; grant writing; and planned giving.

“I’ve loved the time I’ve worked at Catawba and feel a true calling to help advance the mission and the vision of Catawba, an institution that continues to play a vital role in education in our state and region,” Dees said. “I am also very grateful to my colleagues at the Foundation for the Carolinas for allowing me the opportunity to put my skills and experience to work at Catawba in a different yet very familiar way.”

Before joining the foundation, Dees was assistant director of the North Carolina Department of Commerce’s Main Street Program, which promotes downtown revitalization and economic development within the context of historic preservation in small towns across the state. She also was executive director of the Downtown Goldsboro Development Corp.

She is involved in many area nonprofit organizations, serving or having served on the boards of Piedmont Players, Rowan Museum, Preservation North Carolina, and the National Sportswriters and Sportscasters Hall of Fame Association. At Catawba, in addition to her service on the board of trustees, she served on the Center for the Environment advisory board and the Board of Visitors. She has also served on the Catawba Foundation board.

She earned a master’s degree in public administration from North Carolina State University and her bachelor of arts degree from Mary Baldwin College in Virginia.

Dees is married to Jay Dees, an attorney in Salisbury, and they have two children, Archie and Maggie. The Deeses are members of St. John’s Lutheran Church.