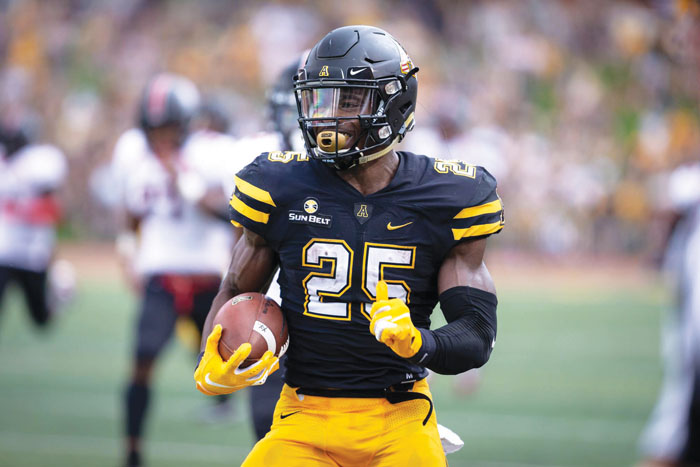 BOONE — Jalin Moore, a record-setting running back during his Appalachian State career, has been invited to the 2019 NFL Scouting Combine.

Held in Indianapolis from Feb. 26 through March 4, the event will attract a total of 338 prospects, including five from the Sun Belt Conference. There have been 28 running backs invited this year.

Labeled by many in the fall as the Sun Belt’s top NFL prospect, Moore increased his career totals to 3,570 rushing yards and 34 total touchdowns before he suffered a season-ending ankle fracture and dislocation Oct. 9. He finished as App State’s all-time leader at 6.13 yards per carry for his career and is No. 6 in career rushing yards.

The ankle injury occurred at the end of a 27-yard touchdown run in which Moore, whose ability to squat 650 pounds helped put him at No. 1 among running backs on NFL.com’s list of the most “freakish athletes” in college football, pulled a defender on his back for the final 10 yards.

The timetable for his recovery was set at eight to 12 weeks, making it difficult for him to be at full strength in time to participate last month in the Reese’s Senior Bowl, but the NFL Scouting Combine offers another opportunity for Moore to display his talents.

A two-time team captain, Moore had four games with at least 235 rushing yards for App State and entered his senior year with consecutive seasons of more than 1,000 rushing yards. At the time of his injury, he ranked No. 2 among active FBS players in career rushing yards.

Moore’s abbreviated senior season included two-touchdown performances in which he rushed for 119 yards on eight carries against Gardner-Webb and 123 yards on 19 carries against South Alabama. He scored on a career-long run of 81 yards in the Gardner-Webb game and had a career-high five catches in the overtime loss at Penn State, where he broke two tackles on a go-ahead, 16-yard touchdown with 1:47 left in regulation.