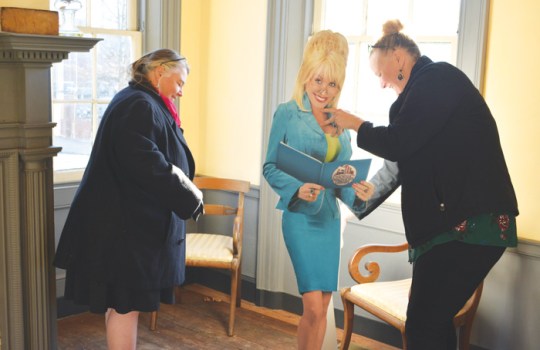 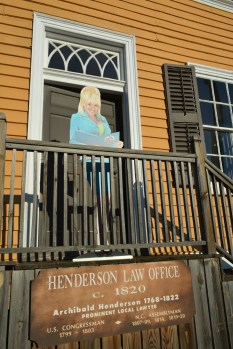 The Dolly cutout will be at Henderson Law Office this Thursday at Fisher and Church streets. Susan Shinn Turner/For the Salisbury Post

This week, the country music superstar is at the Henderson Law Office next to Rowan Public Library’s headquarters branch.

Next week, she may be at Bella Salon in Granite Quarry. Or perhaps Rufty-Holmes Senior Center or Nazareth Child and Family Connection.

Or you may spot her at Salisbury Eye Care and Eye Wear.

OK, so maybe Dolly Parton herself is not in town, but a colorful cutout of the singer and songwriter will be at these locations in the coming weeks. Parton sponsors the Imagination Library, which has distributed more than 100 million books since its founding in 1995.

“This is an early literacy initiative. We pay for every child birth to age 5 to get these books,” Burridge says.

Each county may choose to distribute the books differently, Burridge says. In Rowan County, “we decided to serve every child in every ZIP Code. Regardless of a family’s income level, we want every child to have a book.”

Burridge has found that no matter where she goes to promote Smart Start Rowan, Dolly is a big hit.

“People love taking selfies with her. My job in outreach is to talk about all of our programs, but she is a big draw.”

That’s how Burridge hit on the “Where’s Dolly This Week?” campaign idea. Since Melissa Oleen, the library’s deputy director, serves on the Smart Start Rowan board, she invited Burridge to place Dolly in the window of the Henderson Law Office. Passers-by can spot Dolly in the window at Fisher and Church streets.

“The library is a big advocate of the Imagination Library program, for obvious reasons,” Burridge says, “and they have their own Dolly cutout.”

Anyone who wants to take a selfie with Dolly at the library, the law office or other locations should post on Facebook and tag @smartstartrowan. The hashtags #dollypartonimaginationlibrary, #wheresdollythisweek, and #smartstartrowan can be added as well.

Dolly will travel to the above locations, and perhaps make other stops this fall, Burridge says.

“I want her to go all over Rowan County because this is a countywide initiative,” she adds. “Dolly may just pop up at some of our county commissioners meetings. Also, a lot of our child care centers want her, so we’re working on a plan to get a second Dolly and take her around to visit our child care centers.”

On Thursday, the Henderson Law Office will be open from 3 to 5 p.m. Burridge will staff a table with information about the Dolly Parton Imagination Library, and Gretchen Witt, supervisor of the Edith M. Clark History Room, will be on hand to answer questions about the law office.

Burridge says that some 2,700 children throughout Rowan County — including nearly 350 “graduates” who have gone on to kindergarten — have been enrolled in the Imagination Library program.

“Our goal for the first two years was to have 2,400 children, so we have surpassed our goal,” she says.

But with 9,500 children in Rowan who are age 5 and younger, there are plenty more early readers to enroll, she adds. Every child who enrolls — no matter what age — gets “The Little Engine That Could” for a first book. That was Parton’s favorite book as a child.

Every month after, children receive an age-appropriate book. So by the time they reach kindergarten, they have a library all their own.

Burridge remembers signing up folks at Farmers Day last summer when one parent told her, “We want to make sure people who need them get the books.”

That’s certainly a sweet thought, Burridge says, “but this program is for everyone.”

“Smart Start Rowan’s goal is to put books in the hands of all children ages 0 to 5 in Rowan County. The ‘Where’s Dolly’ campaign will bring visibility to Dolly Parton’s Imagination Library and help us continue to meet our annual goals,” says Sue Herrington, Smart Start Rowan’s board chairwoman. “The North Carolina legislature has funded this initiative with tax dollars. This program is a great example of our tax dollars directly benefiting our community.”